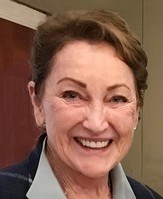 BORN
1942
DIED
2021
FUNERAL HOME
Kenneth W. Poe Funeral & Cremation Service - Charlotte
1321 Berkeley Avenue
Charlotte, NC
Susan T. Breckenridge
August 10, 1942 - August 28, 2021
Charlotte, North Carolina - Susan T. Breckenridge, age 79, died peacefully in her Southpark home on August 28th surrounded by her husband and her two sons.
Sue is survived by her husband Larry Breckenridge and her sons A. Todd Breckenridge of Chicago, IL and David Breckenridge of Asheville, NC.
Sue was born on August 10th, 1942 in Passaic, New Jersey to mother June Agnes Mowat and father Alan Beresford Todd who was a decorated Brigadier General in the US Army, and served as President Eisenhower's legal advisor. Sue's father's service provided many opportunities for living abroad as a child.
Sue was a dedicated, influential and beloved community member of Charlotte having spent over 25 years in service here. From 1996 to 2007 Sue was VP of Public Affairs for Time Warner Cable and responsible for community, government and media relations. Following she became VP of Regional Communications for TWC (now Spectrum) and participated in strategic development of government relations. She worked for Governor Pat McCrory and helped institute the partnership between private businesses and educational institutions. From 2017 to 2020 she was the Development Director for the NASCAR Hall of Fame Foundation.
Sue served on the Boards and was Chairman of several committees including: Better Business Board, Athletes United for Youth, Women's Dress For Success, Veterans' Bridge Home, and the Women's InterCultural Exchange.
Sue was an active member of Christ Episcopal Church on Providence Rd in Charlotte.
A memorial service will be held at a later date due to Covid 19.
In lieu of flowers, please donate in her name, to one of the following charities: The Purple Promise Foundation for Melanoma Research, c/o David Hodgkins, PO Box 790033, Charlotte, NC 28206 or The Victoria A. Bowler Memorial Scholarship, c/o CPCC Foundation, PO Box 35009, Charlotte, NC 28235.
Arrangements are in the care of Kenneth W. Poe Funeral & Cremation Service, 1321 Berkeley Ave., Charlotte, NC; 28204 (704) 641-7606. Online condolences can be shared at www.kennethpoeservices.com.

Published by Charlotte Observer on Sep. 12, 2021.
To plant trees in memory, please visit the Sympathy Store.
MEMORIAL EVENTS
To offer your sympathy during this difficult time, you can now have memorial trees planted in a National Forest in memory of your loved one.
Funeral services provided by:
Kenneth W. Poe Funeral & Cremation Service - Charlotte
MAKE A DONATION
MEMORIES & CONDOLENCES
Sponsored by The Charlotte Observer.
2 Entries
Susan was a trailblazer for women like me. She was a strategic thinker and a great advisor. I hope you know how much she meant to so many.
Vi Lyles
October 20, 2021
Sue fought the good fight, faith strong to the end. "God´s got this," she would say. And she was right. Sue enjoyed life and pushed through every challenge. She will be missed.
Charlie and Susan Smith
Friend
September 12, 2021
Showing 1 - 2 of 2 results