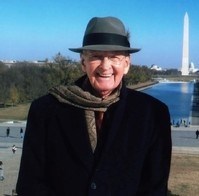 BORN
1928
DIED
2021
FUNERAL HOME
Robertson Funeral & Cremation Service
10310-300 Feldfarm Lane
Charlotte, NC
Thomas Lockhart
April 5, 1928 - September 14, 2021
Charlotte, North Carolina - Thomas Ashe Lockhart died in the Briar Creek Health Center at The Barclay at South Park on Tuesday 14 September 2021. He was born at St. Peter's hospital in Charlotte, North Carolina on 5 April 1928.
He was the son of James Alexander Lockhart, Jr. and Sara Maffitt Lockhart, and the brother to James Alexander Lockhart, III and Sara Maffitt Lockhart Carr, all of whom preceded him in death.
Tom attended public schools in Charlotte and graduated from Central High School in May 1945. He attended the University of North Carolina at Chapel Hill and received his BA in May 1949.
Continuing his education at the UNC School of Law, he received his JD in 1951. After graduation, he was admitted to the North Carolina Bar, enlisted in the US Army, was commissioned a Second Lieutenant in the JAG Corps, served in Korea, was awarded the Bronze Star medal, and was honorably discharged with the rank of First Lieutenant in 1953.
Tom began his long and distinguished legal career with John Cansler in 1953, forming the Cansler Lockhart law firm, which was known as Cansler, Lockhart, Campbell, Evans, Bryant, and Garlitz and was the oldest continuous law practice in North Carolina at the time of his retirement in 1995.
He was a committed fan of UNC and a loyal supporter of the law school throughout his life and participated in several projects for the benefit of the law school.
Tom was a long-time member of Christ Episcopal Church in Charlotte and was also associated with St. Peters Episcopal Church, Charlotte; St. Phillips Church, Charleston; The Episcopal Radio TV Foundation, Atlanta; and Mepkin Abbey, Monck's Corner.
He was an accomplished traveler, a student of family genealogy, a patron of the arts and the Metropolitan Opera in particular. An avid swimmer, he swam the equivalent of circumnavigating the earth at least once before he stopped keeping account of his mileage. He also had a terrific sense of humor and was a masterful storyteller.
Tom is survived by his wife, Ann Marsh Wilkinson Lockhart; his four children: Thomas Ashe Lockhart Jr. and his wife Stephanie, James Wilkinson Lockhart and his wife Julie, John Laurens Lockhart and his wife Amy, and Ann Lockhart Gilman Mayeux and her husband Craig; and his niece Eloise "Bunny" Lockhart-Sample born to James Alexander Lockhart III and Eloise Dey Collins Lockhart. He was "Papa" to two granddaughters: Grace Maffitt Lockhart born to James Wilkinson Lockhart and Julie Place Lockhart and Charlotte Olivia Laurens Gilman, born to Ann Lockhart Gilman and Jon C. Gilman.
In lieu of flowers, Tom would be grateful if you would consider making a donation to: Crisis Assistance Ministries, Charlotte; Christ Episcopal Church, Charlotte; UNC School of Law, Chapel Hill; or a charity of your choice. The family would like to thank the Staff of the Briar Creek Health Center and Dr. Hsu at Novant, who provided great care for him.
A graveside service will be held at Elmwood Cemetery at 11:00 AM on Tuesday 21 September 2021 and will be officiated by The Reverend Lisa Saunders.

Published by & from Sep. 17 to Sep. 19, 2021.
To plant trees in memory, please visit the Sympathy Store.
MEMORIAL EVENTS
Sep
21
Graveside service
11:00a.m.
Elmwood Cemetery
NC
Funeral services provided by:
Robertson Funeral & Cremation Service
MAKE A DONATION
Please consider a donation as requested by the family.
MEMORIES & CONDOLENCES
Sponsored by The Charlotte Observer.
1 Entry
No sympathy is deep enough, no words are caring enough to take away sorrow. Please know that you are and will continue to be in so many thoughts and prayers In Sympathy Dan Caldwell and Family
Dannetta Caldwell Dunn
Friend
September 20, 2021
Showing 1 - 1 of 1 results