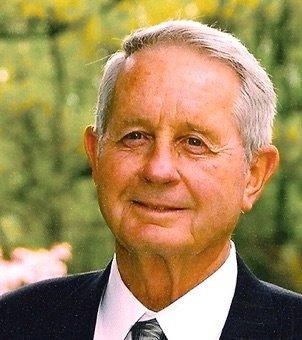 Bill graduated from Matthews high school in 1947. He honorably served his country in the US Army (8th Calvary Regiment) during the Korean War. He was wounded in battle on November 21, 1951 and received the Purple Heart Award on May 15, 1952. Bill retired from Bell South in 1991.

Bill's greatest love was his family. He was a devoted and loving husband, father, grandfather, great grandfather, son, and brother. He took his role as a parent very seriously and was most diligent in teaching his four children (and their children) the importance of a strong faith, a good work ethic, good manners, kindness, and responsibility. Not only did his love and devotion apply to his immediate family, but to his extended family as well. No one loved a family reunion better than he. His second love was being on the farm. Bill and Dot parented their children on the home sight of the Caldwell family farm and lived there until it was annexed into Charlotte in 2001. He loved gardening (as in a two and a half acre garden....not a 20 by 20 plot), cows, horses, dogs, cats, and hunting. He also cooked the best barbeque pork one could imagine. And at some time or another he found time to do all of them....all the while working and parenting four children. He lived a long and happy life, and for him and that long life, his family is very thankful.

Bill's family would like to thank the staff of Plantation Estates for the kind and loving care he received there.

Arrangements are in the care of Heritage Funeral Home, Weddington Chapel. An online guestbook is available at www.heritagecares.com.
Published by Charlotte Observer on Oct. 27, 2016.
To plant trees in memory, please visit the Sympathy Store.
MEMORIAL EVENTS
Oct
29
Celebration of Life
1:00p.m.
Matthews United Methodist Church
801 South Trade Street, NC
Oct
29
Burial
Forest Lawn East Cemetery
3700 Forest Lawn Drive, Matthews, NC
Funeral services provided by:
Weddington/Matthews Chapel - Matthews
MAKE A DONATION
MEMORIES & CONDOLENCES
7 Entries
I didn't know until today Mr. Black passed away. I am so sorry for your loss. He was a wonderful man; so kind...fond memories of him while growing up. Rest in peace Mr Black...Mrs. Black, Sarah, Jimmy, Debbie...You are in my thoughts and prayers. Love Kathleen Daugherty Tuttle
August 28, 2017
What beautiful sentiments from the friends of your dear loved one. Please keep his memory alive by always cherishing your time together...may you have peace.
Ms Pat
October 31, 2016
Debbie and family,
I am thinking about you and wishing you comfort.
Tammy (Alford) Williams
October 29, 2016
Dot, children, Ted and Gilbert: All my sympathy on losing Bill. He was truly a good man.
We've lost so many of our loved ones these last years. It's difficult to realize that the years are passing ever swiftly.

Love, Deane
Deane Black Hinson
October 27, 2016
My condolences to the family for your great loss of loved one. I am sure all the wonderful memories you have of your life together will be a source of comfort and peace. Matthew 11:28,29,30,
October 27, 2016
Bill was a pleasure to work with. He always had a smile on his face to greet you. I loved his great wit. He was a good Telephone man.
David (Fuzz) Allred
October 27, 2016
To the family you have my deepest sympathy. May the God of comfort strengthen you during this difficult. (Psalms 4:1)