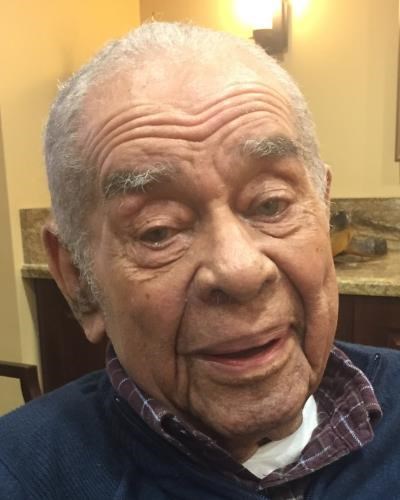 BORN
1926
DIED
2019
FUNERAL HOME
DONNELLAN FAMILY FUNERAL SERVICES
10045 SKOKIE BLVD.
Skokie, IL
Ambassador Arthur Winston Lewis, age 92, passed away peacefully on January 10, 2019, in Wilmette, IL. Beloved husband of the late Frances Lewis; loving father of the late Dian Cuendet-Lewis and Dale (Pete) Wentz; proud grandfather of Peter (Meagan), Hilary (Mike) and Andrew; fond great grandfather of Bronx, Saint and Marvel Wentz and Chelsea and Isla Hoye; dear uncle to many nieces and nephews and a cousin of Colin Powell, the first African American Secretary of State. He was preceded in death by his first wife Dolores and two siblings.Ambassador Lewis was born July 1, 1926, in New York City. A student at Dartmouth College, Lewis left to enlist in the Navy in 1943 and served for 23 years until 1966. He returned to Dartmouth to work with the N.R.O.T.C. and teach Naval Science while still on active duty. He completed his Bachelor's and Master's degrees in Government while at Dartmouth in 1966.Lewis was a career foreign service officer who served in diplomatic missions in Eastern Europe and Africa before retiring in 1987. He also played a significant role in expanding opportunities for racial and ethnic minorities in the American diplomatic corps.In 1966, Lewis joined the United States Information Agency (USIA), a Cold War-era diplomatic agency intended to promote American culture and understanding abroad. With the support of the Ford Foundation, in 1967, Lewis created an expanded minority recruitment program for USIA, targeting African American, Latino and Native Americans enrolled in universities around the nation. The program brought students to Washington, D.C., for expanded training in history, language and international affairs as preparation for successfully completing the Foreign Service entrance exam.Lewis began his own foreign service career in 1969 when he was assigned by USIA to the U.S. Embassy in Bucharest, Romania. While there, he promoted American music as a forum for engaging the Romanian people in western culture. When the American jazz-rock band Blood Sweat & Tears visited Romania in 1970, Romanian officials sought to shut down a performance. Lewis successfully negotiated with the band and communist officials to allow the concert tour to continue.Lewis's primary foreign policy interest lay in Africa. From 1972 to 1974, Lewis served as Cultural Affairs Officer at the U.S. Embassy in Lusaka, Zambia. In 1974, he was sent to Ethiopia and in 1977, Lewis was sent to Lagos, Nigeria, where he continued his work for USIA until being appointed as the agency's Director of African Affairs in 1979. In 1983, President Ronald Reagan nominated Arthur Lewis as U.S. Ambassador to Sierra Leone. He served at the Embassy in Freetown until his retirement in 1986. Arthur Lewis continued to promote international political and economic development in Africa after his retirement from diplomatic service. He has been a senior consultant for the Nord Resources Corporation which operated mining interests in Sierra Leone from 1983 to 1995. In 2016, he moved to Wilmette to be closer to his daughter, Dale, son-in-law, granddaughter and two of his five great grandchildren.A reception in celebration of his life will be held: Sunday, January 27, 2019 from 1:00 p.m. to 2:30 p.m. at Westminster Place, Elliott Hall (located below the Elliott Chapel) 3131 Golf Road, Evanston, IL 60201.A Funeral Service with full honors will be held: this spring at Arlington National Cemetery. In lieu of flowers, memorial contributions may be made to:Dartmouth College designated to the Ambassador Arthur W. Lewis Memorial Fund Gift Recording Office Dartmouth College 6066 Development OfficeHanover, NH 03755. Info: www.donnellanfuneral.com or 847-675-1990

Published by PL-North on Jan. 24, 2019.
To plant trees in memory, please visit our Sympathy Store.
MEMORIAL EVENTS
Jan
27
Celebration of Life
1:00p.m. - 2:30p.m.
Westminster Place
Elliott Hall (located below the Elliott Chapel) 3131 Golf Road, Evanston, IL
Funeral services provided by:
DONNELLAN FAMILY FUNERAL SERVICES
MAKE A DONATION
MEMORIES & CONDOLENCES
5 Entries
I had the pleasure of knowing Ambassador Lewis during the last few years he lived in Virginia. It was always a pleasure to sit and chat with him about his adventures and career. He always spoke lovingly of his family. I was glad he got to spend his last days near them.
Paula Manczuk
Acquaintance
April 12, 2019
May your hearts soon be filled with wonderful memories of joyful times that you shared together. May our loving Heavenly Father provide you with the comfort and support that you need during this difficult time. (Psalm 145:18,19) Our thoughts and heartfelt condolences goes out to you and your family.
February 12, 2019
My condolences to the family.May the God who gives peace, give you the strength to cope at this difficult time.He promises to heal the brokenhearted and to comfort those who mourn Isaiah 61:1,2
Louise
February 3, 2019
I had the privilege as a young Foreign Service Officer (FSO) to serve in the U.S. Embassy with Art and Dolores Lewis. Art was a wonderful diplomat and person and went on to very senior positiosn in the US Information agency and the Department of State, including as Ambassador to Sierra Leone. A really good guy. Condolences to his family.
Shaun Donnelly
January 28, 2019
May the God of all comfort sustain your family during the days ahead Psalms 119:76
January 17, 2019
Showing 1 - 5 of 5 results