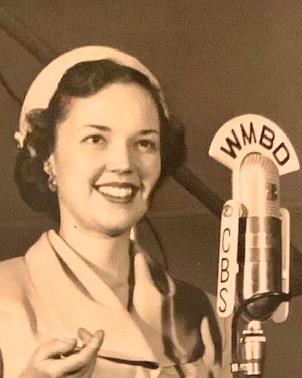 In the 1940s and 50s, Barbara was a popular radio personality in Peoria. She was the Women's Director of WMBD, hosting various radio programs, including a Saturday morning talk show with Flavel. She continued her radio work after the family moved to Batavia, New York. When the family returned to the Midwest, Barbara branched out into print journalism, writing a wonderful column for the suburban Chicago Tribune about things to do and see in the Chicago area.

Throughout her life, Barbara volunteered tirelessly for her church and community, in her children's schools, with the girl scouts, and for 4H projects. After Flavel's retirement and their move to Hot Springs Village, Arkansas, Barbara produced and moderated style shows to raise money for Potter's Clay Ministries. She was a popular tour guide at the historic Hot Springs bath houses, putting her marvelous narration skills to good use and enthralling visitors with tales of the spa town in its heyday. Barbara was an outstanding bridge player and loved golf, theater and her family – but family first!

Barbara was a wonderful and memorable person. She was smart, funny, curious, and listened to friends and family. She was truly interested in their lives and problems. Barbara loved to travel. She and Flavel spent many happy years touring the United States with their trailer. She enjoyed visiting family and friends throughout the United States, in Europe and Mexico. She was an excellent and fearless driver and often drove the hundreds of miles alone to visit her sons in the Chicago area and her daughter in Evansville. Barbara was a magnificent grandmother. Her grandchildren adored her and they cherish their memories of her. A lifelong fan of the Chicago Cubs, she made sure that everyone in her family knew how to keep a box score. Their 2016 World Series win was one of the highlights of her later years.

Barbara donated her body to the Genesis Whole Body Donation program at the Medical Education and Research Institute in Memphis, Tennessee. At a later date, there will be a memorial mass and service to celebrate her life.

Friends may sign the online guestbook or send condolences at www.wrightandsalmon.com

Published by Chicago Tribune on Jan. 17, 2021.
To plant trees in memory, please visit the Sympathy Store.
MEMORIAL EVENTS
To offer your sympathy during this difficult time, you can now have memorial trees planted in a National Forest in memory of your loved one.
Funeral services provided by:
Wright & Salmon Mortuary - Peoria
MAKE A DONATION
MEMORIES & CONDOLENCES
2 Entries
I am so sorry to hear about Barbara's passing. She lived across the hall from my Mom at Riverpointe. She was the first person to befriend my mom on her first day there. She was like the goodwill ambassador at Riverpointe and everybody knew and loved her. She always had such an upbeat outlook on life. She always spoke so lovingly of her family and enjoyed every minute of your visits. She will be greatly missed by all.
Brenda Garvey
January 17, 2021
Mike (DY), I am so sorry for your loss. You have my deepest condolences.
Joe McIntyre
Friend
January 16, 2021
Showing 1 - 2 of 2 results