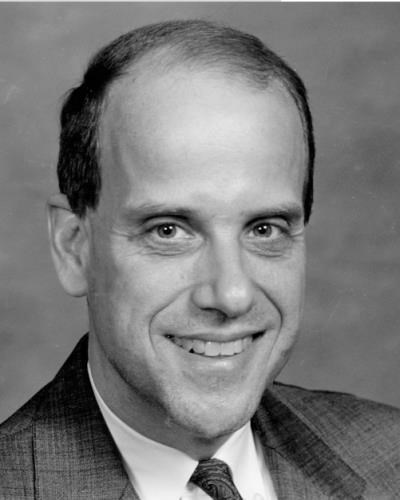 Chris was born and raised in Lake Forest, IL. He was born with spina bifida and became somewhat of a "miracle child," as he was expected to only survive a few years. He not only survived, but thrived, attending Lake Forest Country Day School, then Fountain Valley School in Colorado Springs. He worked for the Northern Trust Bank in Lake forest for 35 years becoming Vault Manager and a VP. Chris had a fantastic memory for names and relationships. He knew and was known by much of the Lake Forest community. So much so that within the family and friends circle he was affectionately known as "The Mayor" of Lake Forest.

He volunteered for years in the Missions Possible Bookstore at the Church of the Holy Spirit in Lake Forest and often did lay readings from the Bible during services. Chris loved spending summers in the Northwoods of Wisconsin, staying in touch with family and friends who gathered there at the multi-family camp. In his younger years he also relished his time on the Southeast Florida Coast, again with family and friends. Chris had many collections, was a train buff and was an enthusiastic Cubs baseball and Black Hawks hockey fan.

Chris will have a memorial service at Church of the Holy Spirit in Lake Forest, IL on Sat, May 15th at 10:30 AM CDT. The service will also be available Live Stream at CHSLF.org.

To plant trees in memory, please visit our Sympathy Store.
Published by Chicago Tribune from May 2 to May 6, 2021.
MEMORIAL EVENTS
May
15
Memorial service
10:30a.m.
Church of the Holy Spirit
, Lake Forest, Illinois
GUEST BOOK
20 Entries
Please accept my most sincere ' condoleances ' at this time of the passing of Mr. Chris Bacon. He was always kind to me while attending the boarding school. I last saw him in 1985 at a reunion.
DANIEL ( Robert B. ) ; FVS [ 1975 ]
May 18, 2021
My sympathy to Knight Bacon and the rest of the Bacon Family. He sure will be missed!
Marge Helms
Friend
May 16, 2021
I will truly miss you Chris. It was a pleasure working with you at the bank in Lake Forest. What an amazing person you were. Sending healing prayers & comforting hugs to your family.
Brenda Stark
May 12, 2021
Chris was such a great person!!! My thoughts and prayers go out to his family.
Carol Duffield
May 7, 2021
Chris invited me to a Black Hawks game in 1979. He did not tell me that I would be sitting with the Wirtz family. Unfortunately I was wearing an old pair of jeans that had holes in them. For years he asked me if I still had those jeans with the holes. Chris was kind and generous with an easy way about him. He will be missed. Mike Smith, Friend from Artisan Park
Mike Smith
May 7, 2021
Please accept my deepest sympathies. Recall playing football and basketball with Chris when working at The First National Bank of Lake Forest. He was a keen competitor and well-liked by all. Recall that Chris was also a proficient Tennis player. Sincere Regards, Randall Moore.
Randall Moore
May 5, 2021
What a fruitful life Chris lived. He will be missed
Stephen
May 5, 2021
My sincere condolences to the Bacon Family on the sad news of Chris' death. Recognizing my dear friend Hoyt and all the members of the Bacon family, as did I, my brother and father who attended FVS in Colorado Springs, it is truly as though we have lost a member of our extended family. May he truly rest in peace. Ed '41, Bill '68 and Peter '69.
Peter R Stroh
May 3, 2021
Rare in such abundance, courage, intelligence, empathy, and thoughtfulness were genuine hallmarks with Chris. Rest in peace, my friend.
Hunt Hamill, Jr.
May 3, 2021
I´m so sorry to hear of Chris´s passing. He was a regular and welcome visitor at Gorton and was so friendly to me when I was new there and always. My thoughts go to his family.
Amy Wagliardo
May 2, 2021
Chris you were a really wonderful person . We will all miss you very much .
Constable Eric Bradway
May 2, 2021
My sympathies to you, Knight, and all of your family. Chris was such a spark of light and inspiration in those early Day School years.
Lindsay Gedge Strand
May 2, 2021
I've known Chris for 60 years. I can't imagine the world without him. He will be so missed.
Carol Jones
May 2, 2021
I remember Chris' good suggestions and insights, when we served on the Lake Forest Library's Board of Trustees.
Maureen McNally Janes
May 2, 2021
Chris was a wonderful friend to me over many years. I so enjoyed going to Blackhawk games with him. I have so many fond memories of those days. He will be missed by many. I send condolences to the Bacon family for this loss.
JENNIFER ROMANS
Friend
May 2, 2021
Sweet Chris. You were always of good cheer, a great & dear friend; you are family. Hold you in our hearts, forever..
Anita Watkins
May 2, 2021
What a wonderful and caring human being Chris was. He was so empathetic towards my beloved late husband as his bank customer. He truly was a gentleman. Rest In Peace dear person. Charlene Ackerman
Charlene Ackerman
May 2, 2021
Such a wonderful person , who will be deeply missed by all that knew him .
Debbie Sipe
May 1, 2021
Coming down the grand marble staircase at Northern Trust to the vault.....Chris was always at the desk with a smile......we would sit and talk.....what a lovely friend....
Kelly Hutchinson
May 1, 2021
You will be missed my friend. Rest easy.
Steven Armour
May 1, 2021