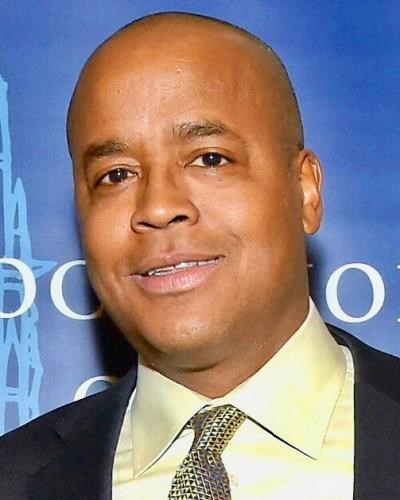 BORN
1964
DIED
2019
Christopher Martin Quander, 54, of Chicago, IL, passed away peacefully on December 20, 2018, following a courageous fight against cancer. Chris is survived by his children: Christopher Quander of Orlando, FL; Elizabeth Quander of Chicago, IL, and Sarah Quander of New York, NY. He is survived by his parents, Dr. Joseph and Arthuree Quander of Austin, TX and by his brothers, Joseph, Stephen, Jonathan (Bethel), and Martin (Denise). He is also survived by many other family and friends.Chris was born on August 23, 1964 in Albany, GA, and he grew up in Austin, TX. Chris graduated from St. Stephen's Episcopal School (Austin) in 1982 and Yale University in 1987. Following graduation, Chris moved to Chicago where he met and later married Dr. Carline Wilson in 1989. In Chicago, Chris worked for O'Connor & Associates as a trader in the pits on the CBOE. He later worked for Botta Trading where he managed proprietary options trading groups. At the time of his death, Chris worked as a financial technology strategist and as a head of business development at Lekos Technology Solutions LLC and OptionEyes LLC. Chris was very much a "people person" and valued his friendships deeply. He was an intellectual, a charmer and a fighter his entire life. Chris loved his time at Yale and treasured the lifelong friendships that began in New Haven. Chris was a leader in the Yale Club of Chicago, Yale Black Alumni Association (Chicago) and the Yale Alumni Association Board of Governors. He was a tireless advocate for leadership strategies to support diversity, equity and inclusion. Beyond his career and community involvement, the greatest joy in his life was being Christopher, Eliza and Sarah's father. He was incredibly proud of the wonderful people they have become.Memorial services at First Unitarian Church, 5650 S. Woodlawn Ave., Chicago, IL will be on Sunday, January 20, 2018, at 4:00 p.m., followed by a reception. In lieu of flowers, the family would request that donations be made to the Yale College Christopher M. Quander '86 Scholarship Fund, c/o Yale University Office of Development, PO Box 2038, New Haven, CT 06521 (203.432.5436) or electronically at giving.yale.edu/supportChristopherMQuander.

Published by Chicago Tribune from Jan. 6 to Jan. 19, 2019.
To plant trees in memory, please visit the Sympathy Store.
MEMORIAL EVENTS
Jan
20
Memorial service
4:00p.m.
First Unitarian Church
5650 S. Woodlawn Ave, Chicago, TX
MAKE A DONATION
MEMORIES & CONDOLENCES
17 Entries
Family, there are no words to convey my sorrow for you during these trying times. Chris left a legacy of memories for you to reminisce on; treasure those memories and be assured that the God of Comfort has him tucked away in his memory as well.
SJ
January 18, 2019
My family sends our sincere condolences on your loss. May happy memories of your loved one and the words at Isaiah 57:15 bring you much comfort as it does me.
Green Family
January 14, 2019
I was deeply saddened to hear of Chris's death following his courageous battle with cancer. I knew him through his Yale alumni work. He was smart, funny, a great storyteller, a strategic thinker and deeply dedicated to diversity, equity and inclusion. And brave. My deepest condolences to his family.
Betsy Sullivan
January 13, 2019
During this difficult time i would like to express my condolences for his family.We feel the loss when there is a death.At Acts chapter 24 verse 15 the bible shows that those who have died will be restored back to life, which is comforting.
N. B.
January 12, 2019
To all the wonderful Quander family, I send my heartfelt sympathy for the loss of a son and a brother. I send my love and prayers to all of you.
Sandra Paschall
January 12, 2019
I'm sorry for your loss and May the God of all comfort be with you and your family.

TW
January 12, 2019
Arthuree, Joe and all of the Quander family, Please accept the condolences and sadness from the all of the Baird family on Christopher's passing. We know what a loss and a time of sadness this is for your wonderful family. Our hearts and prayers are with you at this difficult time.
JoAn Baird, Colleen Baird Crawford, Karin Baird Miller and Brian Baird.
January 10, 2019
To the Quander family. We're deeply sorry for the loss of your son Christopher. May the memories remain deep in your hearts. May each passing day ease the pain in your grieving hearts. His kind deeds will always be remembered . Hebrews 6:9,10
January 10, 2019
Dr Q and Ms Arthuree, Please accept our condolences for the death of your Son. We are sorry for your loss.
Leon Roberts
Friend
January 8, 2019
Deepest Condolences to the dear Quander family. May he rest in peace.
Marie O'Shaughnessy Martin
January 8, 2019
Arthuree, I am so saddened to hear that your precious son has passed away. Please know that my thoughts and prayers are with you and your entire family.
Patty Francis
January 8, 2019
Though the words are few, the sympathy is great and God's love is greater than all.
B. Musial
January 8, 2019
Joe and Arthuree I was shocked and sadden by Christophers death. I know how much suffering goes with the loss of an offspring Our hearts and prayers go out to you. Tom
Tom and Paula Coopwood
Friend
January 8, 2019
Please accept my condolences for the loss of your dear love one. May all the family and friends of the family will find comfort in Drawing close to God and he will draw close to you at this most difficult time and help.
EL
January 7, 2019
May your family experience the kindness and peace from God our Father and the Lord Jesus Christ at this difficult time. 2 Cor. 1:2
ab
January 7, 2019
To Eliza and the rest of the family, please know that I am so very sorry for your loss. I will continue to pray for your family for God's Strength.

Denise M.
Denise Macon
January 7, 2019
Please accept my sincerest condolences for your loss. I hope that words such those found at John 6:40 bring you comfort at this difficult time.
January 7, 2019
Showing 1 - 17 of 17 results