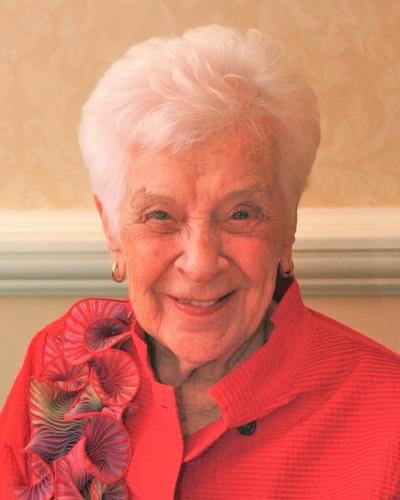 Coraine "Co" McArthur of Kenilworth, Illinois passed away Saturday, February 13, 2021, at the age of 106. She was born in Northfield, Illinois on May 14, 1914, to Fred and Olga Pfingsten of Pfingsten Road fame, Northbrook, IL. She married her beloved husband, Dr. Charles Louis McArthur, on June 25, 1938, who preceded her in death in 1978.

Co graduated from Deerfield-Shields High School (Highland Park HS) in 1932 and attended Vogue School of Design in Chicago. Following graduation, Co began working for Florence Custom Made Clothes in Glencoe. Her future husband attended a fashion show and told his mother, Florence, that he 'wanted that waistline' when he saw Co modeling! The company later moved to Hubbard Woods in Winnetka where Co continued to work until her retirement in 1976. Throughout her life, Co enjoyed an active life: golfing at Knollwood Club and curling at Chicago Curling Club, sharing both of these passions with her husband, Chuck, and curling with her granddaughter, Jennifer. Co was a longtime member of the Women's Western Golf Association serving as a Director from 1968 to the present and secretary of WWGA Foundation for 40 years. In addition, Co created many tournament scoreboards with her excellent calligraphy skills. In 1998, Co received the 'Woman of Distinction' award from WWGA.

Sundays during the summer, she and Chuck were found playing couples golf where she earned the moniker of "cookie lady" for the delicious cookies she brought to share with others. Eventually, those Sunday golf outings were called the "Cookie League" at Knollwood Club. Her fabulous baked goods were enjoyed by members of the Chicago Curling Club where she often brought cookies and bars to tournaments and bonspiels. A curling event was named after her --"Co McArthur Stacked Brooms"--when she was 90 years old; she and her team won that tournament three times after that! Co was famous for her pies of all kinds!

Co "never wore the same dress twice" to a party and loved to dance with Chuck at Fortnightly and Knollwood. They had great friends in the 'Glidden Gang', which gathered monthly to plan their Memorial Day Weekend retreat at the cabins in Wisconsin! Co had her favorites: The Chicago Cubs, the Chicago Bears, Northwestern Football, Wheel of Fortune, the Jumble in the Chicago Tribune and chocolate ice cream!!

To plant trees in memory, please visit our Sympathy Store.
Published by Chicago Tribune from Feb. 21 to Feb. 25, 2021.
MEMORIAL EVENTS
No memorial events are currently scheduled.
To offer your sympathy during this difficult time, you can now have memorial trees planted in a National Forest in memory of your loved one.
Funeral services provided by:
N.H. Scott & Hanekamp Funeral Home
GUEST BOOK
1 Entry
Co was our first friend when we joined Knollwood Club in 1971 and we shared many wonderful times with her. We treasured her friendship. May God Bless Co!
JoAnn & Jack Childers
February 23, 2021