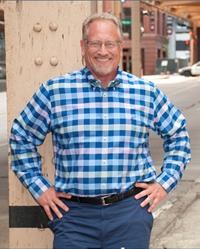 BORN
1958
DIED
2020
ABOUT
Glenbrook North High School
David Charles Kluever beloved husband of Lisa (née Boysen) passed away on May 20th at the age of 61. David resided in Lake Forest, Illinois with his wife, Lisa, and their dog, Gracie.

David was born on August 14, 1958 to Geraldine "Jeri" (née Poad) and Gary Kluever in Peoria, Illinois. He grew up alongside younger siblings Cynthia and Brian in Northbrook, Illinois where he attended Glenbrook North High School, class of 1976. David continued to DePauw University, class of 1980, where he was a member of the football team and joined the Sigma Chi fraternity. He then earned a law degree from Case Western Reserve University, graduating class of 1983. David matriculated at John Marshall Law School to earn his Master of Laws degree in 1987.

Love and vigor truly embodied David and his legacy; he never did anything he didn't feel passionately about and he approached everything at full speed. He is survived by his wife, Lisa, his children, Brad (Erin), Erik, and Meredith (Hunter); his mother Jeri, and siblings, Cynthia and Brian (Claire); seven nieces and nephews; his two uncles John C. Kluever (Judy) and William J. Poad (Anne). His family misses him dearly and will fondly remember him and all that he represented.

He practiced law for the state of Illinois where he counseled more than 20 appeals in the Illinois First District Appellate Court and Illinois Supreme Court. David co-founded Kluever Law Group (formerly Kluever & Platt) in 2001.

David's life can be summarized by words and accomplishments, but it was his actions, hobbies, and passions that defined him as the larger-than-life character he was. He was a loving husband, son, father, and friend to those lucky enough to be in his far-reaching circle.

A celebration of life will be held for David when we are able to gather again safely. In lieu of flowers, please send donations to the Driftless Area Land Conservancy, www.driftlessconservancy.org, to help preserve an area that captured David's heart.