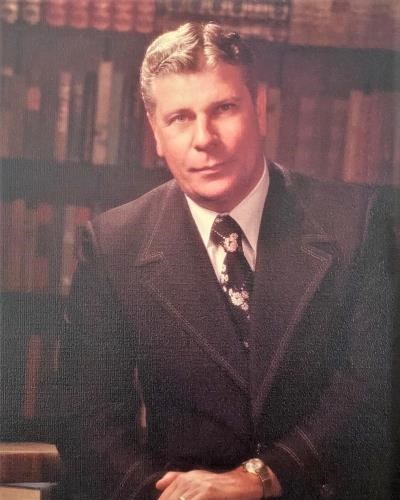 ABOUT
Weber High School
FUNERAL HOME
Ryan-Parke Funeral Home - Park Ridge
120 South Northwest Highway
Park Ridge, IL
Donald J. Babicz, a long-time resident of Park Ridge, and past President and C.E.O. of Norwood Federal Savings Bank, died on January 6. He was 88 years old. Mr. Babicz was raised in the Norwood Park area of Chicago and attended St. Thecla grammar school and Weber High School. After graduating from Weber, he attended the University of Illinois in Champaign/Urbana on a football scholarship, was a member of the Chi Phi fraternity and received a B.S. degree in General Engineering. He began his working career at Inland Testing Laboratories, concentrating on the testing of aircraft and rocket components under Air Force contracts from Wright Air Development Center. Mr. Babicz was granted a governmental secret clearance for reliability testing of aircraft jet fuel components within explosive environmental atmospheres. Whereupon he published a technical paper in Petroleum Engineering concerning the explosive characteristics of jet fuels. His engineering career was interrupted when he was drafted into the Navy. Mr. Babicz spent the following two years with Carrier Air Group 11 stationed at NAS Miramar near San Diego, six months of that time was aboard the carrier USS Essex sailing the Western Pacific. With three months remaining in the Navy, Mr. Babicz married his long-time sweetheart Collette nee Gesicki on June 15, 1957. Upon his release from the Navy, Mr. Babicz resumed his engineering practice, but after a brief time he changed careers and joined the staff of the then Norwood Park Building and Loan Association. During his 35 years in the business, he held various positions, and ended his career as President and C.E.O. of Norwood Federal Savings Bank. During his business life, Mr. Babicz was active in various civic, community, and business organizations. He served as Chairman of the Communities Division of the American Cancer Society for the Northwest side of Chicago, was President of the Parents Teacher Council of Maine South High School and sat on the Advisory Board of School District 207. Mr. Babicz served as President of the Polish League of Savings Institutions and was a member of the Board of Directors of the Illinois League of Savings Institutions in Springfield, Illinois. Mr. Babicz and his wife Collette were long time members of the Park Ridge Country Club where he also served on the Board of Directors. He was a member of the Holy Cross Council of the Knights of Columbus and a parishioner of St. Paul of the Cross since 1959.

Published by PL-Central on Jan. 13, 2022.
To plant trees in memory, please visit the Sympathy Store.
MEMORIAL EVENTS
To offer your sympathy during this difficult time, you can now have memorial trees planted in a National Forest in memory of your loved one.
Funeral services provided by:
Ryan-Parke Funeral Home - Park Ridge
MAKE A DONATION
MEMORIES & CONDOLENCES
3 Entries
My sympathy in the passing of Mr Babich, I work for Norwood Federal Savings and Loan for about a year between years at college. He was a nice man. PEACE
Laura Kapp
Work
January 9, 2022
I thank you & Aunt Collette for good memories and pray for peace for your family.
Lori
January 8, 2022
Offering our deepest sympathies during this time.
The Staff of Ryan-Parke Funeral Home
January 9, 2022
Showing 1 - 3 of 3 results