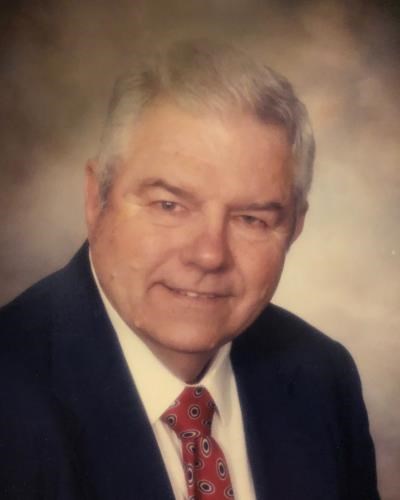 BORN
1927
DIED
2018
Donald P. Doherty, age 91, passed away Wednesday, November 21, 2018, surrounded by his family. Born Sept. 4th 1927 in McHenry to Paul J. and Vera Bolger Doherty, Donald meant the world to his family. He was a role model to his children and an inspiration to his grandchildren. He always had a kind word and his generosity touched many. Donald always said it was a privilege to work. He felt he never worked a day in his life because he truly loved what he did. He loved being a resident of McHenry all of his life. Donald Doherty didn't only live in McHenry, he LIVED McHenry. He was honored to serve as Mayor of McHenry for 12 years, a city he cherished. Green Street, home to Bolger Drug Store, McHenry City Hall, his home and his church, held a special place in his heart. He proudly served his country in the United States Army, and he served his community in many ways. He served on the McHenry County Board and was a member of many organizations including the McHenry Chamber of Commerce, McHenry County Catholic Education Foundation and the Knights of Columbus. He was a McHenry High School distinguished graduate and McHenry Fiesta Days Parade Marshal. He was also a recipient of the Frank E Low Award. He enjoyed going for car rides, going to the McHenry Country Club on Thursday nights and playing bingo with his friends. Survivors include ten children, Colleen Jackson of Woodstock, Jay (Colleen Drumm) Doherty of Chicago, Celeste (Michael) Heidemann of McHenry, Cynthia (David) Henderson of McHenry, Christine (Kenne) Ludwig of McHenry, Carolyn (Bob) Sweeney of Woodstock, Joseph (Kimmy) Doherty of McHenry, Connie (Joe) Bopp of Sharon, WI, Catherine (John) Brodbeck of Crystal Lake, and Carmel (Donald) Ray of Temple, Texas; 21 grandchildren, Courtney (Joe) Fisher, Katelynn (Matthew) Fisher, Jay, Ignatius, Joseph and Rosalie Doherty, Michael and Adam Heidemann, Patrick and Sarah Jane Henderson, Phillip (Lauren), Lindsey, and Benjamin Ludwig, Erin and Kevin Sweeney, Casey and Delaney Doherty, Nathan (Cassie) and Mary Bopp, and Joseph and David Ray; 7 great-grandchildren, Ellody, Ehlyn, Evangeline, Jackson, and Olive Fisher, Penelope Ludwig, and baby girl Ludwig; and a sister, Mary Jean Hopkins. He was preceded in death by his parents; and beloved wife Rosalie, a sister Helen Ann; Sister in law Jinny Williams, Bea Newkirk and Son in law Randy Jackson. The visitation will be from 3 p.m. until 8 p.m. Sunday, November 25, 2018, at The Church of Holy Apostles, 5211 Bull Valley Rd, McHenry. On Monday, November 26, friends should go directly to meet the family at St. Patrick Catholic Church, 3500 W. Washington Street, McHenry, where the funeral Mass will be celebrated at 10 a.m. Interment will follow at St. Patrick Countryside Cemetery, McHenry. Donald's family suggests memorials to St. Patrick Countryside Cemetery Enhancement Fund, 3500 W. Washington St. McHenry, IL 60050 or to Misericordia, 6300 N Ridge Avenue, Chicago IL 60660. Arrangements were entrusted to Justen Funeral Home & Crematory, McHenry. For information, call the funeral home at 815-385-2400. Friends may leave an on-line condolence to the family at www.justenfh.com.

To plant trees in memory, please visit our Sympathy Store.
Published by Chicago Tribune from Nov. 23 to Nov. 25, 2018.
MEMORIAL EVENTS
Nov
25
Visitation
3:00p.m. - 8:00p.m.
The Church of Holy Apostles
5211 Bull Valley Rd, McHenry, Illinois
Nov
26
Funeral Mass
10:00a.m.
St. Patrick Catholic Church
3500 W. Washington Street, McHenry, Illinois
Funeral services provided by:
Justen Funeral Home & Crematory
GUEST BOOK
16 Entries
My thoughts and prayers are with Mr. Doherty' s beautiful family. I was so lucky to know him. I waited on him for years at the squire restaurant. He was always smiling and so sweet to wait on. I just loved him. He was so special. It's good to be a waitress when your so well treated, he wasent just a customer but a friend. he is truly missed.
Carrie Obermayer
December 2, 2018
Condolences to all of the family. I lived across the street in the Nick
Jay Whittemore
December 2, 2018
To Jay and the entire Doherty Clan,My deepest sympathy to all of you in your loss of a great father and mentor to many. I know he will be missed but the memories of him will live on for generations to come!
God Bless.
Doug and Sharon Steger
Doug Steger
November 27, 2018
Dear Carolyn, our deepest sympathy to you and your family. May the happy memories you shared over the years, be a comfort to you in the days ahead.
Life passes away, but love has a way of blessing us forever.
Trudie, Ron and family Gohl
November 26, 2018
May the Love and Joy you shared with your Father, Grandfather, Uncle, Friend or other relationship with Donald, bring you Peace and Comfort in your loss. May your Memories keep Him alive in your Hearts!! Big hugs, mj
November 26, 2018
To hte family of Don Doherty I send you my deepest condolences on the loss of the father and grandfather who loved you so much. I am so honored to have served our county with Don. He was a man of honor, a man who cared, a man who gave of himself in service to his community. He was a man who earned our love and deepest respect.

May the void left by Don's passing be filled with wonderful memories of a beloved man.

Ann Hughes, Woodstock
November 26, 2018
My sincere condolences to the family and friends of Donald. May time soften your pain until all that remain is your wonderful memories you've shared and the comfort of God Psalms 119:76.
GD
November 26, 2018
Our condolences to the Doherty family. May the love of God, friends and family carry you through your grief. (1 John 4:21)
T. M.
November 25, 2018
Dearest Jay & Colleen and Family, Rex and I are so sorry about the loss of someone near and dare to you and your family's heart. I'm so sorry we can't be their with you in your time of need. It break's my heart !We love you all and are praying for your Dad and the rest of your family. My Dad AND Mom send their condolences. Stay strong and head up, love ya cous' XOXO Rex and Nancy
November 25, 2018
nancy marie schafer magee
November 25, 2018
Dear Colleen and family I was sorry to hear of your Dad's passing. He was a wonderful man who raised beautiful children. My thoughts and prayers are with you at this sad time.
Mary Jo Welcome-Vollrath
November 24, 2018
Sending all of you my deepest condolences. I hope all of your happy memories help to comfort you.
Wendy Bauman
November 24, 2018
My deepest sympathies. May the "God of all comfort," help to ease the pain of your grief during this time.(1 Cor 1:3,4,,,
November 24, 2018
Our prayers are with the Doherty family. The Dohertys were great neighbors and friends to us on Green st. Love, Tom & Judy Fowler, AZ
November 23, 2018
Our sympathy and special prayers for Mr. Doherty and all his friends and family.
The Sisters and Residents of Misericordia
November 23, 2018
My deepest condolences to your family for the loss of your loved one. May the cherished memories you have of Donald help sustain you during this time. May your family be comforted by looking forward to Jesus promise of seeing your dear one again recorded at John 6:40.
VG
November 23, 2018