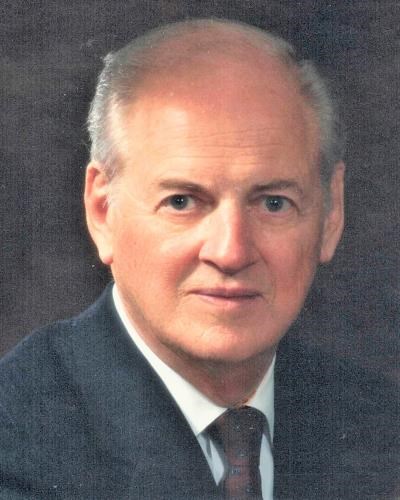 BORN
1921
DIED
2021
ABOUT
Schurz High School
FUNERAL HOME
Davenport Family Funeral Home - Barrington
149 West Main Street
Barrington, IL
Edward Nicholas Koenig passed away peacefully at home in Glenview on August 17, 2021. Ed was born in Chicago on January 13, 1921 and met the love of his life, Norma Strey, in Sunday School when they were 15. Norma and Ed were married for 77 years until her passing in 2019. He attended Carl Schurz High School in Edgebrook and graduated from the University of Illinois where he was active in ROTC, wrote for the Illio yearbook, and was a Sigma Chi brother. He was commissioned as a 2nd Lieutenant in the Army Air Corps and went to Key Field in Mississippi. Before going overseas he asked Norma to marry him. They wed on July 25, 1942 and lived at Fort Macdill in Tampa where he became Adjutant for the 391st Bomb Group. He was stationed in England, France, and Belgium during WWII, was promoted to Lieutenant Colonel, and received France's Croix de Guerre. Ed worked in the heavy machinery division of International Harvester and received his MBA from the University of Chicago. The family moved from Edgebrook to Glenview in 1954 where he and Norma built a home, raised their four children, started a bridge club of church friends, and became very active in the community. In 1961 they, along with her brother, founded Koenig & Strey Realtors that eventually grew to 13 offices stretching from the Gold Coast to Libertyville. They were also founding members of the First Church of Christ, Scientist, in Glenview, where Ed was Chairman of the Board of Directors, 1st Reader, Superintendent of Sunday School, and head usher, as well as on the committee that went into prisons and mental institutions throughout Illinois providing Christian Science church services and chaplaincy. His faith was a guiding light and constant source of strength. He was also a Rotarian who lived the principles of service in the Four-Way Test of truth, fairness, goodwill, and equitable benefits. Ed served as Trustee of the Village of Glenview Library where he participated in the Veterans' Oral History Project (http://gplgenealogy.blogspot.com/2020/05/veterans-oral-history-project.html). He was on the endowment fund of the Glenview History Center, and the planning commission for Patten House, a culturally and economically diverse housing development. Ed was active in Boy Scouts, where he was given the God and Service Award, and the Good Scout Award. He was named Glenview Citizen of the Year in 2010 and recognized as a Significant Sig by the Sigma Chi International Fraternity. He also served as President of the Board of Dairymen's where he and Norma loved to fish, golf, and vacation with family. Ed attributed his success in life to God's direction and provision through prayer, hard work, professionalism, ethics, and marrying the right woman. Ed was a wonderful husband and father who, with Norma, created a circle of love that included friends, colleagues, and community partners. His steady leadership, business acumen, spiritual wisdom, and unconditional support will continue to guide and encourage everyone who knew him. He will be greatly missed by his remaining family members: his children, Tom Koenig, Carolyn (Chris) Eigel, Nancy (Craig) Davis, Jeanne Hanson; ten grandchildren, Jeff (Karoline) Eigel, Ted (Andrea) Eigel, Amy (Jason) Reynolds, Chris (Katie) Bolling, Tom (Suzanne) Bolling, Matt (Libby) Koenig, Alissa (Jim) Staples, Meredith Koenig, Megan (Ben) Hanson, Kristen (Geoff) Hanson; and 20 great-grandchildren, as well as loving nieces and nephews. He was reunited in heaven with his adoring wife, Norma S. Koenig, his two sisters, Virginia Denton and Naomi Davis, and parents Ossie and Mattie Koenig. We are grateful to the angels, both human and divine, who attended his passing. Donations may be made to the First Church of Christ, Scientists, Glenview, 1333 Glenview Rd, Glenview, IL 60025, or a charity of your choice. Celebration of life service is planned for October, date to be determined. For information, please contact Davenport Family Funeral Home, Barrington, 847-381-3411. For online condolences please visit, www.davenportfamily.com.

Published by Chicago Tribune on Aug. 22, 2021.
To plant trees in memory, please visit the Sympathy Store.
MEMORIAL EVENTS
To offer your sympathy during this difficult time, you can now have memorial trees planted in a National Forest in memory of your loved one.
Funeral services provided by:
Davenport Family Funeral Home - Barrington
MAKE A DONATION
Please consider a donation as requested by the family.
MEMORIES & CONDOLENCES
2 Entries
I'm so grateful to Mr. Koenig for kindnesses expressed to me in the past in locating my family's property in Glenview from over 100 years ago. He was the historian of real estate in Glenview. Special thanks to daughter Nancy for handing the phone to him 2 years ago so thank him oersonally. Our condolences to your family...
Laurel Goodwin
Friend
January 14, 2022
Ed was a remarkable man with an extraordinary life. The ripples he sent out to and through those he impacted will continue for ever. I knew him as my Sunday School teacher, as the father of friends, and as the grandfather of students who I taught in school. The world, Glenview, and all of us will miss him dearly.
Scott Buzard
August 22, 2021
Showing 1 - 2 of 2 results