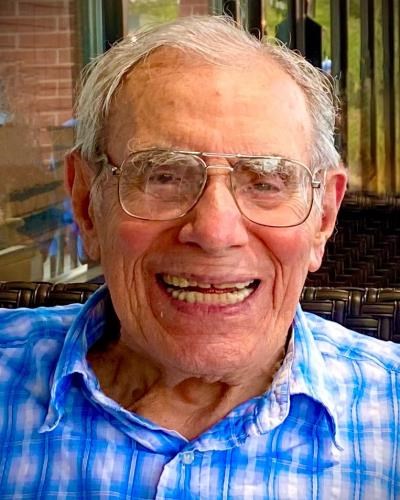 Frederick Anthony Antonelli, 93, of Arlington Hts. died in his home surrounded by family. He was married 59 years to the love of his life, the late Margaret Jean (nee) DeGeorge; loving father to Celeste, Tom, Mary and the late Randy; loved grandfather to Amanda, Andrew, Michael, Jessica, and Samantha; cherished great-grandfather to Roman and August; beloved brother to Ugo (Marianne) Antonelli; and dear uncle to many nieces and nephews. Fred's engineering introduction was at Illinois Tool Works while a student at Kelvyn Park High School. After graduation Fred served in the US Navy during WWII on a Sea Going Tug. He was discharged from active duty in 1947 but continued in the Navy Reserve until 1950. He worked his way through college at a drug store, where he designed one of the first drive thru windows of the time. Frederick completed his BS Degree in Civil Engineering at Illinois Institute of Technology in January 1952. He worked for The Illinois Department of Transportation on the Congress Expressway in 1951, and later earned his PE in 1958. Fred spent most of his career at Consoer-Townsend (later becoming AE Comm) from 1954-1995 and through 1997 as a consultant. He was heavily involved in highway design, construction and maintenance in the Chicago area. Fred oversaw 20 miles of US Rt 66 from Joliet to Grundy Counties and was later involved in the development of the Ohio Street feeder ramps, and bridges at Milwaukee, Ogden, Grand and Halsted. He was in charge of the O'Hare taxiway bridge hydronic snow melting system, revolutionary for its time and still in use today. He also designed the infrastructure of the city of Columbia, MD. Fred's many domestic airport projects included O'Hare, Midway, Meigs Field, Miami, Billy Mitchell Field, DuPage County, Sault Saint Marie and AR airports in Newport and Walnut Ridge. His international airport projects included Lesotho, South Africa, Taiwan, and Mexico City. Frederick was published by Civil Engineering Magazine regarding continuously reinforced pavement in runway design. He held several offices within the Northwest Chapter of ISPE and became an Honorary Life Member, a distinction bestowed only upon those attaining eminence in engineering. Fred was a talented Toastmaster and heavily involved in Math Counts. He was a devoted husband and a dedicated family man. Fred's big heart, easy smile and zest for life will be missed by all. A Funeral Mass was held Friday, January 22, 2021 at St. Edna Catholic Church and interment was at All Saints Cemetery in Des Plaines. Funeral Information and condolences can be given at www.GlueckertFuneralHome.com or (847) 253-0168.