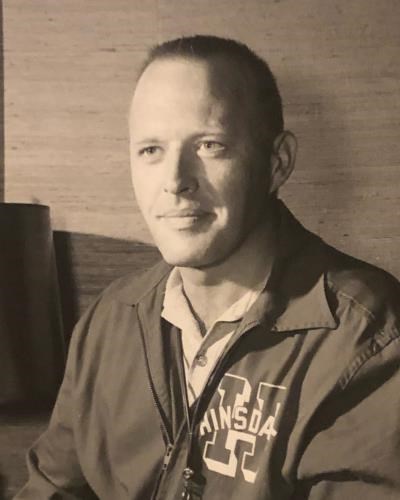 FUNERAL HOME
Sullivan Funeral Home
60 South Grant Street
Hinsdale, IL
Frederick William "Bill" Trescott of Hinsdale passed away on November 17, 2021. Born in Chicago on October 28, 1929, the son of Frederick George and Leila (Williams) Trescott, Bill was a multi-sport athlete at Wheaton (now Wheaton-Warrenville South) High School, graduating in 1948. His subsequent studies at New Mexico Highlands University were interrupted by service in the Korean War as a cryptographer with the 15th Radio Squadron, Mobile, United States Air Force Security Service. After the War, Bill returned to New Mexico Highlands, where he played football (offensive line) and was graduated in 1956. With a career in education in mind, he went on to earn a MA from the University of Iowa in 1959.

Bill's greatest decision was accepting a teaching job at what is now Hinsdale Central High School in 1957, where he met another new teacher, Betty (Peters) Kinney, a young widow who would become his wife two years later. Raising a family in Hinsdale, Bill taught P.E., social studies, and drivers ed., and coached basketball (going downstate in 1959), tennis, baseball, and football (including multiple conference champions), ultimately become head varsity baseball coach and varsity line coach for football. Moving from coaching to administration, Bill became head of the guidance department, then assistant principal, principal from 1972-80, and finally assistant superintendent until his retirement in 1994. He was inducted into the Hinsdale Central Hall of Fame in 2004, for giving "countless hours to building Central's and [District 86's] reputation as a high performing and exemplary place for secondary education", and was also named as a Distinguished Alumnus and a member of the NMHU Alumni Golden Society. In addition to his work in education, beginning in 1978 and for 30 years after, Bill served on the Board of Directors of Mid America Bank.

Outside professional life, Bill's activities and associations included the Union Church of Hinsdale, Kiwanis, Scottish Rite Masons, Committee of 100, Wheaton Old Timers, the 15th R.S.M. Association, and, along with Betty, being parents to numerous dogs and cats, and supporting the Hinsdale Humane Society and other animal rescues. Bill's passion for sports continued after his coaching days at Central: Little League manager and softball coach; serving on the Medinah Shrine Athletic Committee; many days on the golf course, including being a starter at the 2004 U.S. Open at Olympia Fields; and cheering on and agonizing over Chicago sports teams, especially the White Sox (a season ticket holder for almost 40 years) and Bears. Remaining in Hinsdale in retirement, Bill and his Bride also enjoyed membership at the Riverside Country Club, and wintering in Padre Island, Texas.

Bill Trescott was preceded in death by Betty, his wife of 60 years. He is survived by his sons, Thomas (Melissa) and Robert W.; his brother, Robert G. Trescott; sisters-in-law Ruth Peters and Eileen Trescott; five nieces and nephews; numerous grand and great-grand nieces and nephews; and many, many loving friends. A Memorial Service will be held 11:00 a.m., Saturday December 11, at the Union Church, 137 South Garfield, in Hinsdale. In lieu of flowers, memorials may be made to any and all of the following: New Mexico Highlands University, Box 9000, Las Vegas, New Mexico 87701, www.nmhu.edu; Hinsdale Central High School Foundation, P.O. Box 296, Clarendon Hills, Illinois 60514, www.hinsdalecentralfoundation.org; Wire Fox Terrier Rescue Midwest, P.O. Box 21, Mokena, IL 60448, www.wirefoxrescuemidwest.com; the Union Church, www.hinsdale.church; or the veterans organization of choice. Interment will be private. Arrangements by Sullivan Funeral Home Hinsdale. 630-323-0275 or www.sullivanfuneralhomehinsdale.com.