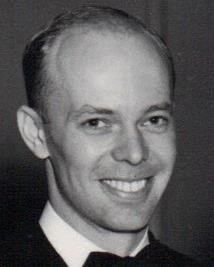 BORN
1923
DIED
2020
ABOUT
Glenbrook North High School
A guy who had Nazis shooting at him in the hedgerow lanes of Normandy and in a foxhole in Bastogne during WWII probably never dreamed in 1944 that he would die peacefully in his sleep at age 96 on April 15, 2020 in Evanston, IL.

Known as "Dick" to everyone except the U.S. Army, he was born in 1923 in the small town of Amboy, IL, the only child of Burt and Anna (McMahon) Hewitt. Every week at the movies he saw an utterly glamorous world of big cities, beautiful blondes, and enduring popular music, sparking his life-long passion for travel and The Great American Songbook. A gifted pianist, he majored in music at Illinois Wesleyan, leaving in his sophomore year to enlist in the Army.

Dick was assigned to the 101st Airborne Division and after training in the U.S., landed in England on his 20th birthday. He visited London every possible chance before being delivered via glider to France for the D Day invasion. He was in Paris after the liberation, then returned to England - only to redeploy to Holland for Operation Market Garden. In December, he and the rest of the 101st were rousted out of camp to defend Bastogne in the Battle of the Bulge. On April 30, 1945, he was at Dachau the day after it was liberated. Discharged at Christmas, Dick returned to Illinois and finished his bachelor's at Northwestern and his Master's at Columbia.

In 1950, he married Joyce Hughes, who died in 2008 on their 58th wedding anniversary. Those 58 years produced three children, five grandchildren, a successful career at Glenbrook North High School, a music-and-book-filled home in Northbrook, many camping trips, four dachshunds, five cats, and a lot of laughter.

Dick had many acquaintances, a few dear friends, a superb sense of humor, and a family who thought the world of him. His passions for music, books and movies, and the enticements of Chicago jazz clubs, the symphony and the theater were a mainstay of retirement for him and Joyce - when they weren't bicycling through Europe, attending class at Common Ground, haranguing their elected representatives, taking piano lessons (again), or participating in Elderhostels around the globe. Their most frequent destination was England to visit the two families who "adopted" him as a GI after inviting him to tea in 1943. Those friendships not only endured throughout his life, but have stretched across three generations, sustained by his children.

Dick's autobiography notes, "At the start of the 1940s, I was a senior in high school. When it ended, I had fought in combat, seen the Alps, London, Paris, Edinburgh, Strasbourg and the Mediterranean, finished undergraduate and graduate degrees, had my first "real" job and was engaged to be married. Those years were a real ride on Life's merry-go-round. It was my first experience with the chaotic nature of existence – an often interesting, sometimes frightening, occasionally fascinating time. The world that opened up to me in those 10 years was a very different one than had there been no World War II. I had every reason to give Life a hug for getting me from 1940 to 1950."

We have every reason to give his Life a hug for getting from 1923 to 2020. To mourn and celebrate him, he leaves his children Ann (Jon Gordon), Sally (Larry Jakus), Dick (Kelly), grandchildren Margaret Jakus, Abigail Jakus, Katherine Hewitt, Jack Hewitt and Grant Hewitt (Adrienne), his 101st Airborne comrade-in-arms Phil Hooper and Laura Hewitt. We give thanks to the amazing caregivers at Three Crowns Park for the part they played in the last chapter of his life. A memorial celebration will be held at a later date. Donations may be made in his memory to Orphans of the Storm (www.orphansofthestorm.org) or Chicago a cappella (www.chicagoacappella.org).

Published by Chicago Tribune from May 3 to May 4, 2020.
To plant trees in memory, please visit the Sympathy Store.
MEMORIAL EVENTS
To offer your sympathy during this difficult time, you can now have memorial trees planted in a National Forest in memory of your loved one.
MAKE A DONATION
MEMORIES & CONDOLENCES
2 Entries
It was a pleasure to be on the faculty with Dick starting at the beginning of GBHS in 1953. He was an outstanding teacher and counselor. It was always a joy to be with him.
Coach Sherman
May 8, 2020
My sympathies to the family and most especially to Ann; who is one of my most favorite patients at Dr Fernitz office. Dick was a lovely man with a sly sense of humor. I will miss him!
Sandy Maxwell
Friend
May 3, 2020
Showing 1 - 2 of 2 results