George H. Wright
1923 - 2021
BORN
1923
DIED
2021
ABOUT
Evanston Township High SchoolNew Trier High School
FUNERAL HOME
Larson-Nelson Funeral Home
1617 North Bridge Street
Yorkville, IL
George H. Wright died Wednesday, February 24, 2021 at his home of old age. He was born March 29, 1923 at Forest Glen, MD, at his Grandfather's sanitarium. He was the only son and the middle of three children born to Lewis A. Wright, Esq. and Katharine W. Wright, MD, who were living in Detroit, MI, at the time. They moved to Evanston, IL, in 1930 and George completed his public education there.

After graduating from Evanston Township High School in June of 1941, he attended University of Wisconsin in Madison in the engineering program until July of 1943, when he went on active duty in the Navy, in which he spent three years and nine months. The last two years of this service was on a Destroyer, the USS Eaton, DD 510, in the South Pacific. He was discharged in April 1946 and married Nancy Arms in June. They went to Bethlehem, Pa. where Mr. Wright received a BS in Mech. Engr. from Lehigh University in October of 1948.

Mr Wright was employed by Underwriters Laboratories from January 1949 to March of 1988, retiring as Managing Engineer of the Follow Up Services Dept. In this job he traveled widely, overseeing the factory inspection programs of many product types in hundreds of factories, including many overseas locations.

The couple lived in Chicago for four years, then bought a house in NW Evanston where they lived for ten years, during which time four children were born to them. In 1962 they moved to Wilmette where their children attended public school, all graduating from New Trier High School. In 1995, due to Nancy having a stroke, they moved into a handicapped friendly single family home in a town on the lower Fox River. Nancy passed in 2003 but George and a son remained at this location.

In 1956 George joined Evans Lodge, No. 524, AF&AM, in Evanston and has been a member of that Lodge for sixty years. He was three times Master of that Lodge and active in the York Rite, receiving the position of Knight of the York Cross of Honor. Later, when they moved to Yorkville, he became active in two lodges in that area, Raven Lodge No. 303 and Kendall Lodge No.471, and was Master of each. He was also a sixty year member of the Scottish Rite and a member of numerous other Masonic bodies, having presided in several of them. Masonry was his passion.

Visitation will be from 4:00 pm until 7:00 pm on Wednesday, March 3, 2021 at the Nelson Funeral Home, 1617 North Bridge Street, Yorkville, IL, with a Masonic Service at 7:00 pm. The Cremains will be committed at Pavilion Cemetery, Kendall Township, in the family plot, alongside his late wife, at a later date. 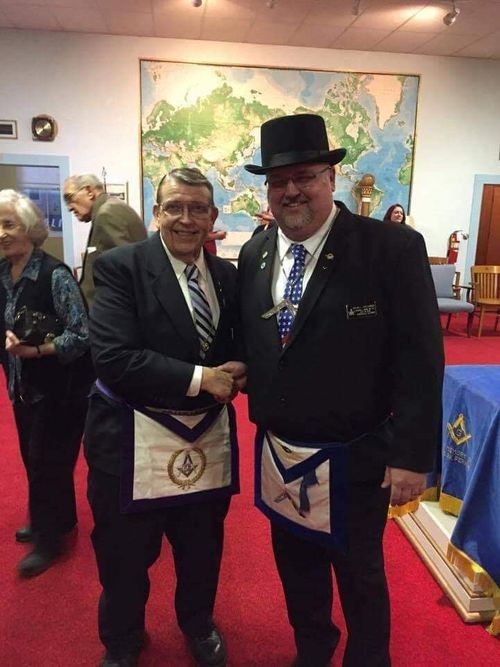 Brother George was more than a
Brother Mason he was my Friend
And Mentor and a man of many
Talents I will miss him
Curtis Simmons
Friend
March 1, 2021
Showing 1 - 4 of 4 results