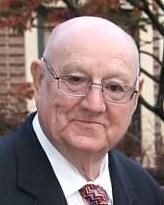 ABOUT
Glenbrook North High School
FUNERAL HOME
N.H. Scott & Hanekamp Funeral Home
1240 Waukegan Road
Glenview, IL
Coach Sam Samorian of Northbrook, Illinois died peacefully at Brandel Care Center in Northbrook after a lengthy illness but a wonderful life of achievements. A popular and celebrated member of the Northbrook community, Sam was a proud son, husband, father, educator, athlete and friend who influenced peoples' lives beyond anything he could have imagined.

Born in Rockford, Illinois to John and Catherine Samorian, who predeceased him, he worked his way through high school and college. He attended Drake University in Des Moines, Iowa and then enlisted in the U.S. Army where he proudly served during the Korean War era. Even though he was stateside, the training and friendships he made at Fort Leonard Wood in Missouri endured.

He then enrolled at Illinois Normal, now Illinois State University in Normal, Illinois, where he earned his bachelor's degree and the affection of a young Sylvia Seifert. His creative proposal was, "If I get a job, will you marry me?" She responded, "I guess so." Sylvia and Sam were married for more than 65 years at the time of his passing. The two got started in 1955 in Sparland, Illinois followed by a quick stop in Sylvia's home base of Sycamore, Illinois.

After a year of teaching in Sycamore, which included Sylvia's brother Joe as a student, they matriculated to Northbrook in 1958 for a job at Glenbrook High School in Northbrook which soon became an integral part of their family, their pride and joy.

It was at Glenbrook, which became Glenbrook North (GBN), that Sam would earn the respect, admiration, and esteem across the academic and athletic fields. He was most proud of accomplishing a rare feat which was participating as a player, coach and official in the state finals of four different athletic disciplines. They were as a student athlete on the 1948 state runner up in basketball at Rockford East, Spartans assistant coach on the 1966 state baseball champions at GBN, head coach of the 1974 Class 5A football champions for GBN, and head official at the Illinois High School wrestling championships.

In recognition of those accomplishments, he was inducted as a member of several athletic halls of fame including the Illinois High School Football Coaches Association, the Illinois Wrestling Coaches and Officials Association, The Midlands (for wrestling), and the Illinois State Athletics Percy Hall of Fame.

For all this recognition, his proudest accomplishments were the people he mentored as a coach, educator, and friend. After winning championships, he talked about the contributions of all and not just the obvious. He was proud of having players who went to Ivy League schools but also those who worked in professions like education. His students included service station owners, landscapers, hedge fund managers, U.S. Olympians, and award winning stage and screen personalities. For his fellow coaches and officials, he recognized the sacrifice they made to help young people grow through sports and wanted to recognize them for their contributions. His service on a variety of coaches and officials associations gave him great satisfaction.

He was a practical Catholic who participated in his faith. In his last days he said, "I think I am going and I am going to where I am supposed to go." A regular communicant and servant in the Catholic church, Sam was an extraordinary minister and lector at Techny, Illinois for the Society of the Divine Word for many years.

He also served briefly in the bereavement ministry at his home parish of St. Norbert Parish in Northbrook, Illinois. The family would like to thank St. Norbert Parish and their staff for their prayers and assistance during his final time with us.

Family was most important to Sam and he was an extraordinary provider. He worked multiple extra jobs to give his family many wonderful practical and material opportunities. Even though he was not a real outdoorsman, he enjoyed spending time at the family summer home in Mercer, Wisconsin. He learned many practical skills there and enjoyed the quiet time away from work to recharge his batteries. He would cut his Christmas break short from snowmobiling to work at the Midlands wrestling tournament at Northwestern University in Evanston, Illinois for more than 50 years.

A celebration of Sam's life will be held in the spring of 2021 when we can gather. The family would like to extend its thanks to all of his caregivers at NorthShore University HealthSystem, Covenant Living of Northbrook and Brandel Care Center. Memorial contributions can be made to the Glenbrook High School Foundation (www.glenbrookfoundation.org), St. Norbert Parish, 1809 Walters Ave., Northbrook, IL 60062 , Society of the Divine Word, Techny (divineword.org), or Covenant Living of Northbrook (covlivingnorthbrook.org).

Published by Chicago Tribune from Jan. 3 to Jan. 7, 2021.
To plant trees in memory, please visit the Sympathy Store.
MEMORIAL EVENTS
To offer your sympathy during this difficult time, you can now have memorial trees planted in a National Forest in memory of your loved one.
Funeral services provided by:
N.H. Scott & Hanekamp Funeral Home
MAKE A DONATION
MEMORIES & CONDOLENCES
6 Entries
My sincere condolences, another Great Coach passes on. I'm sure I'll be able to visit with him at Lazier Field when my time comes.
Shawn Lazier
January 6, 2021
Prayers to Sam in heaven-what a wonderful life and legacy... always great to see and talk to at football games and wrestling meets... awesome man
Dennis McCann-Gordon Tech//Maine South
January 5, 2021
I’m Bert Kraus’ daughter and have fond memories of the Midlands and of having met Sam. If I remember correctly he was the one who recommended a chiropractor I loved (who sadly passed away)....Dr. Oak. We are so sorry for your loss. We will keep you all in our thoughts and prayers. Sam was obviously the ultimate coach and great man.
Susan (Kraus) Gilfillan
Acquaintance
January 4, 2021
So sorry to hear of Sam´s passing. He was a good man and will be missed by many
Bev Watt Gion
January 3, 2021
RIP Coach Sam! Condolences to the family.
Jeanne (Levinson) Bonilla
Student
January 3, 2021
Sylvia and family; Condolences on Sam´s passing. Many fond memories of my years with him at GBN. He was part of an amazing faculty and people.
Jim Runkle
December 31, 2020
Showing 1 - 6 of 6 results