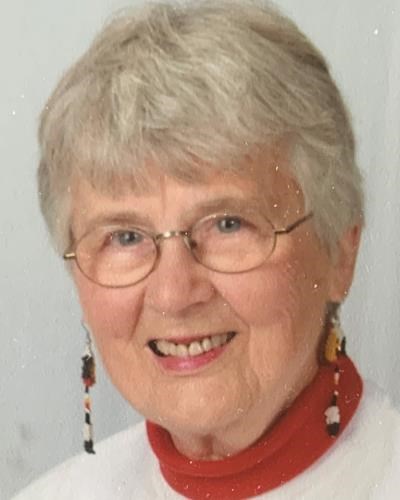 After a long illness, Dr. Irene Meyer, 91, of Wilmette, passed away peacefully on February 11, 2021. As the only child of immigrant, Lutheran parents from Germany, Dr. Meyer was a first-generation American as well as a first-generation college student. While attending public high school in Chicago, she was invited to be a concert violinist with the Mundelein College orchestra. Irene converted to Catholicism choosing to attend Mundelein because of the college's Catholic tradition and its fine music department. Irene started her collegiate career as a music major, but found a passion for psychology, graduating with a B.A. in Psychology and a minor in Music in 1951. She became a Sister of Charity of the Blessed Virgin Mary from 1952-1968 and taught at St. Athanasius in Evanston as well at catholic schools in St. Paul. Irene went on to get her Master's (1957) and Ph.D. from St. Louis University in Research and Clinical Psychology (1966). Dr. Meyer began teaching Psychology at Mundelein College in 1957, served as chair of the department, and particularly loved teaching adult returning women students in Mundelein's Weekend College. Irene was a fervent civil rights activist: fighting to eliminate the death penalty, even delivering a paper opposing the practice to ABC-TV; participating in the Selma to Montgomery marches; and as an advocate for Special Education Programs, she was instrumental in the development PL 94-142. She continued her love of music as an avid musician, playing for the Catholic Women's Symphony, Loyola operas, and North Park orchestra. Dr. Meyer continued teaching at Mundelein and then at Loyola after Mundelein affiliated with Loyola until 1992 when she retired; a 35-year career at Mundelein College of Chicago. At St. Francis Xavier parish in Wilmette, Irene served as a Minister of Care, bringing the sacrament to the homebound and those in nursing facilities. A compassionate and giving friend, she will be missed by so many. Irene is survived by her cousins Irmgard and Henry of Iowa, and Alita and Hugo of Germany. A memorial mass will be held at Saint Francis Xavier Church in Wilmette, on Wednesday, April 7, 2021 at 11 AM. In lieu of flowers, please consider a donation to Saints Joseph and Francis Xavier Ministry of Care, or the Gannon Center for Leadership.

To plant trees in memory, please visit our Sympathy Store.
Published by Chicago Tribune on Feb. 28, 2021.
MEMORIAL EVENTS
Apr
7
Memorial Mass
11:00a.m.
Saint Francis Xavier Church
, Wilmette, Illinois
GUEST BOOK
2 Entries
Irene was a calm, quiet and kind woman. She had great depth to her. We were neighbors and colleagues. We often consulted about the shared parkway between our houses in the middle of the street, as to what to plant. Irene loved her dogs. She had a very beautiful and musical speaking voice. We will miss her. May Irene´s memory be a blessing. I
Ellen Rosenberg
March 1, 2021
What a remarkable person! I was fortunate to be a student of Dr Meyer at Mundelein. Her care and attention to each is us had a profound influence . Her memory will be a blessing to all who cherish it.
Jody ByrneLyke
March 1, 2021