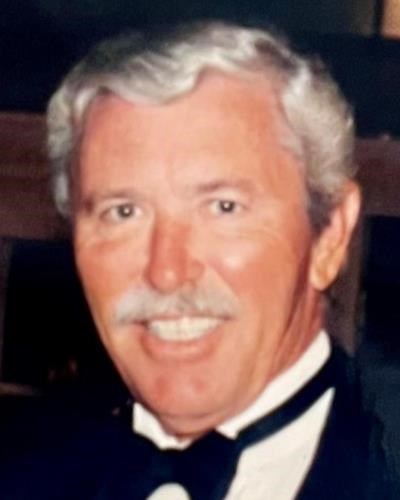 BORN
1939
DIED
2022
FUNERAL HOME
Starks & Menchinger Chapel - Saint Joseph
2650 Niles Rd
Saint Joseph, MI
Born to Frank and Margaret on April 5th 1939 in Chicago, he was an only child. The family moved to Crete, Illinois where he was raised. He went on to attended Miami University in Oxford, Ohio and graduated with Bachelor's Degree in Liberal Arts. In his senior year he met the love of his life, Karen. After serving his country in the Marine Corps, he returned to Miami University and proposed to Karen. They moved to Chicago and Jim began his career in advertising as a copywriter at Leo Burnett Advertising Agency. They married in 1963 and were blessed with three children: Tracey, Marni, and Tim. As his career blossomed, he took on major accounts from McDonald's to United Airlines. His highlight being the "Is it Live or Is It Memorex?" commercial. He truly believed that music could break a wine glass and Ella Fitzgerald actually did! Jim ultimately became Creative Director at Leo Burnett and subsequently joined the Board of Directors. His was lucky enough to retire in his fifties and enjoy a life of travel and adventure but truly loved both the work and the company. Throughout, Jim and Karen were active members of the Chicago Heights Drama Group performing in plays and musicals such as "No Time For Sergeants" and "The Music Man". As it was time to settle down again, he purchased a cottage on Paw Paw Lake in Michigan which became the gathering place for friends and family. He loved the lake and worked continuously for its preservation. He was an avid golfer and enjoyed rounds with his friends at the Point 'O Woods country club. He was a lifelong Bulls and Bears fan and season ticket holder for both. He leaves behind eight grandchildren and three great grandchildren. A celebration of his life is planned in the spring. Those wishing to leave an online condolence may do so at www.starks-menchinger.com. Arrangements have been entrusted to Starks & Menchinger Chapel & Cremation Services, 269-556-9450.

Published by Chicago Tribune on Jan. 13, 2022.
To plant trees in memory, please visit the Sympathy Store.
MEMORIAL EVENTS
To offer your sympathy during this difficult time, you can now have memorial trees planted in a National Forest in memory of your loved one.
Funeral services provided by:
Starks & Menchinger Chapel - Saint Joseph
MAKE A DONATION
MEMORIES & CONDOLENCES
4 Entries
Karen & Family, I am very sorry to hear of Jim's passing. I sure will miss the rounds of golf at Point of Woods with Jim and the Fourth of July parties at your home in Michigan. You and Jim were such great hosts. We will miss him. You and your family have my deepest sympathy.
Gary Jacobson
Friend
January 16, 2022
We called him Mr. Jimmy. He called me Johnny. I worked with him on Teaberry Gum, Schlitz Malt Liquor, Memorex Recording Tape, That idea all started with Jim coming up with the line, "If Caruso could do it so can we". Client said it couldn't be done. Jim found a sound engineer who proved it could. The rest is history. I also worked with Jim on Oldsmobile and Phillip Morris. I was a art director and could be a prima donna at times. Jim was true to the Burnett code. He always judged the work not the man. We kept in touch and would get together for pizza at a little place not far from his home in MIchigan. Talk about the old days. Have a few laughs. Mr. Jimmy. One of the good guys is gone. Johnny
John Klinger
Work
January 14, 2022
Karen and family you are so blessed to have had the love of your life to gather awesome memories. Truly a thoughtful and gracious man, he made you feel as if your thoughts were valuable. May he Rest In Peace, and sending prayers and heartfelt condolences for you and family.
Willa Desmit
January 14, 2022
Karen & Family Margaret and I are so saddened to hear this news. Karen and the best to you and your family. It´s been along time since we´ve been together but certainly feel the loss on our end. Many great times with you and the Pasquinelli´s.
Rich Skurka
Friend
January 14, 2022
Showing 1 - 4 of 4 results