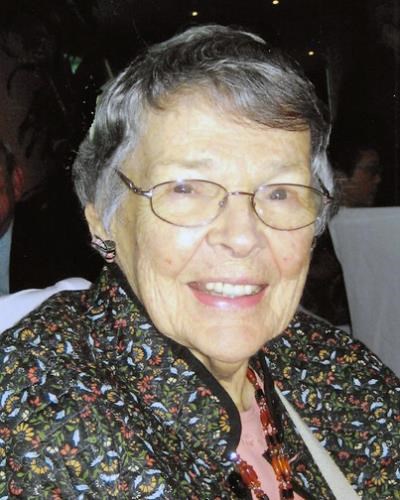 ABOUT
New Trier High School
FUNERAL HOME
Cremation Society of Illinois - N. Clark St.
3824 N. Clark St.
Chicago, IL
Jean Pratt KixMiller, 96, passed away on May 9, 2021 in Evanston, Illinois from natural causes. Born to William and May KixMiller and raised in Wilmette, Illinois, she graduated from New Trier Township High School in Winnetka, Illinois in 1943. Graduating Phi Beta Kappa from Wellesley College with a degree in History in 1947, she earned a master's degree with honors in Liberal Studies from Wesleyan University in 1972, and another in Guidance and Counseling from DePaul University in 1980. Jean continued her education through summer programs through Yale University, Cambridge University, Union Theological School, Northwestern University, and the National College of Education. Jean's professional life was primarily spent at New Trier Township High School in Winnetka where she taught courses in British History, AP Russian History, AP European History, Modern History and World History from 1949 until her retirement in 1989. Jean was recognized as a "Master Teacher" in 1964, a "Leader Teacher" in 1974 and received the "Outstanding Teacher Award" from the University of Chicago in 1984. Jean traveled the world extensively, photographing and gathering information that contributed to her skills as an exceptional teacher. Loved as a Girls Club sponsor for many years, she held the office of Senior Girls Advisor Chairman until retirement. In 1973, Jean was the author of the "Teacher's Resource Book" to accompany the "Western Man and the Modern World", a five-volume world history text. She also wrote the two-semester course designed for Advanced Placement Modern European History. A lifelong member of the First United Methodist Church of Evanston, Jean was a member of the choir for over six decades, served on the music director search committee and participated in the Women's Circle. Jean sang in the Apollo chorus of Chicago and was an enthusiastic, skilled pianist and recorder player. From childhood on, Jean sailed Lake Michigan with family and friends out of Wilmette Harbor and throughout the Caribbean. She assisted with the Wilmette Mariner Girl Scout Troup leadership from 1969 to 1978, which included cruises on the "Shenandoah, a tall ship at Martha's Vineyard. She crewed European waters with Captain and Mrs. Irving Johnson on the "Yankee" of National Geographic fame. In 1995 at the age of 70, Jean married Don MacMillan and became a loving aunt, stepmother and grandmother. She is survived by her three nephews, Richard, John and Daniel KixMiller and their wives; three stepsons, David, Thomas, and James and their wives; her stepdaughter, Molly MacMillan; three grandchildren, Jake, Austin and Victoria; and three nieces, Pamela, Megan and Elizabeth. The family is holding a virtual celebration of Jean's life on Saturday, May 29, 2021 at 1pm. In remembrance of Jean KixMiller MacMillan donations may be made to the First United Methodist Church of Evanston, 516 Church Street, Evanston, IL 60201, or New Trier Foundation on behalf of The Jean KixMiller History Award, 7 Happ Rd., Northfield, IL, 60093, or the charity of your choice. Arrangements by Cremation Society of Illinois, 773-281-5058 or www.cremation-society.com.

Published by PL-North on May 27, 2021.
To plant trees in memory, please visit the Sympathy Store.
MEMORIAL EVENTS
May
29
Celebration of Life
1:00p.m.
IL
Funeral services provided by:
Cremation Society of Illinois - N. Clark St.
MAKE A DONATION
Please consider a donation as requested by the family.
MEMORIES & CONDOLENCES
0 Entries
Be the first to post a memory or condolences.