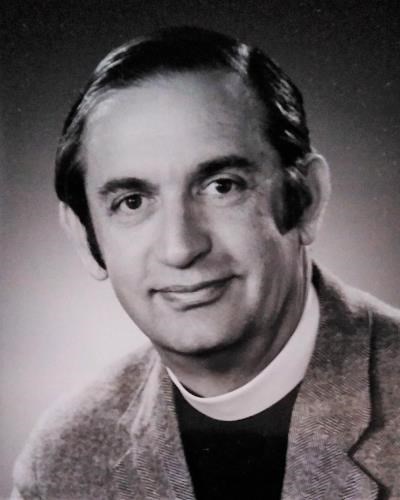 FUNERAL HOME
Grimes Funeral Chapels
728 Jefferson Street
Kerrville, TX
Words can never be sufficient to fully express the magnitude of collective bereavement at the passing of the Reverend John Arthur Lawrence on January 20, 2021. Having lost his wife of over 30 years only weeks prior, he departed this life surrounded by his children and showered in the kinds of comforts he spent his life conveying so generously to others. Funeral services officiated by the Right Reverend David Deed, Bishop of the Diocese of West Texas, were held for close family on January 28, 2021 at St. Peter's Episcopal Church in Kerrville. His remains were interred beside those of his wife, Waynoka Lawrence, in the columbarium at St. Peters.

Few can lay claim to professional and personal choices of such moment to so many, but only few possess gifts that enable the successful pursuit of two professional careers in divergent fields. Though not without their points of intersection, as banker, priest, financial and parliamentary adviser both within and without the Episcopal Church, his varied interests and aptitudes converged to form a man of God, exceptionally adept in this world yet ever mindful of the next. Self-described as highly spiritual but not very religious, he wore the mantle of his priesthood lightly, although his deep faith and abiding compassion clearly informed his every word and deed.

Born during the Depression in Fort Worth, Texas, he graduated from Big Spring High School in 1953. He attended the University of the South in Sewanee, TN, attaining a degree in Bachelor of Arts in Economic Theory in 1957, having served both as president of his fraternity, KA, and as president of the Order of Gownsmen. After graduation, he joined the U.S. Army and for two years worked in ordnance electronics and missile guidance in New Mexico. Following his military service, he built a successful career specializing in data processing in the banking industry for the National Bank of Commerce in Memphis, TN (1959-1962), and for Louisiana National Bank in Baton Rouge, LA (1962-1968), before a profoundly different path opened before him.

He attended the former Seabury-Western Theological Seminary, Evanston, IL., obtaining his Master's of Divinity in 1971, he was ordained into the priesthood on December 21, 1971. He served as Curate at Grace Memorial, Hammond (1971-72), then as Rector of St. Thomas', Monroe, LA (1972-1979). Between 1979 and 1989 he was Rector at St. Augustine's in Metairie, LA, and then became the 11th rector of Grace Church Hinsdale, IL in 1989, serving there until his retirement from active ministry in 1999. He resettled his family in Kerrville, TX where he continued to work in varying capacities for numerous parishes in the area, including time as interim rector at St. Christopher's in Bandera.

Over the course of his long career and brief retirement, his community, Diocesan, and National Episcopal Church responsibilities included election and appointment to committees, councils, and boards too numerous to mention here. His time as an elected member of the Board of Trustees of the University of the South (1974-1980) was a particular point of pride. He worked tirelessly on behalf of both his church and his alma mater. His substantive accomplishments and associated contributions to each congregation and community he served in a professional capacity are dwarfed, however, by the impact he had on the lives of those he touched with his abundant compassion, which exceeds measurement.

Survivors include his daughters, Karen Elizabeth Wall, Melanie Anne Manning, Kelley Anne Morris, Elisabeth West Manning, and Kimberly Clare Brooks, four grandchildren, and a host of nephews, cousins, relatives, friends, former parishioners and colleagues for whom this loss is incalculable. He was preceded in death by his parents, brothers, and beloved wife, whom he now joins in the comforts of eternal rest. Et lux perpetua luceat ei.

The family offers special thanks to Melissa Stewart and her staff at United Angels, and to Aimee Quarrels and those working with her at Peterson Hospice for their extraordinary care and compassion.

Memorial contributions may be made to the National Kidney Foundation.

Condolences may be sent via www.grimesfuneralchapels.com. Select the "send condolences" link.

Arrangements have been entrusted to Grimes Funeral Chapels of Kerrville, TX.

Published by Chicago Tribune on Feb. 7, 2021.
To plant trees in memory, please visit the Sympathy Store.
MEMORIAL EVENTS
To offer your sympathy during this difficult time, you can now have memorial trees planted in a National Forest in memory of your loved one.
Funeral services provided by:
Grimes Funeral Chapels
MAKE A DONATION
Please consider a donation as requested by the family.
MEMORIES & CONDOLENCES
0 Entries
Be the first to post a memory or condolences.