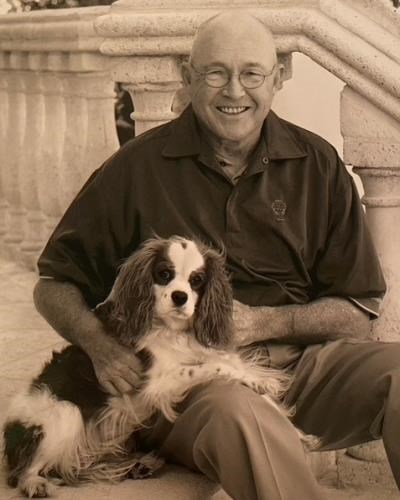 ABOUT
Lake Forest
"Life is mostly froth and bubble

Courage in your own."

John was six when he was diagnosed with type 1 diabetes (T1D) in 1943. T1D is life threatening, there is no cure, and John was told he would likely die by age 15.

Against all odds, John thrived. He met Marilyn when he was 16, she 15. He graduated high school and attended the University of Notre Dame. John loved working as a campus photographer. His favorite gigs were photographing Louis Armstrong and his band, and President Eisenhower. John and Marilyn married before he graduated with honors and entered the business world as an accountant.

They began having children right away, as John began his ascent up the career ladder. His most gratifying achievement came in 1983 when he acquired the dental X-ray division of General Electric and became founder, Chairman and Chief Executive Officer of Gendex Corporation. Gendex designed, developed, manufactured and marketed dental X-ray systems. In its fourth year, the company finally broke even. John then took the company public. Gendex was listed on the NASDAQ Stock Exchange and became the leading dental X-ray manufacturer and distributor in the United States. Gendex was sold to Dentsply, one of the world's leading dental businesses, in 1993.

Business success wasn't enough for John. He wished to make a difference as a philanthropist. He was asked to join JDRF, the Juvenile Diabetes Research Foundation, in their mission to find a cure for type 1 diabetes. He served on JDRF's International Board for several years and was Chairman for two. He served on many special committees for both JDRF International and JDRF's Illinois Chapter, and was the founding Chair of the Beta Society. John and his daughter Allison, who also has T1D, testified before Congress in Washington, DC. He received the Person of the Year Award from both the JDRF Suncoast Chapter in Naples, FL, and the JDRF IL Chapter in Chicago. He's made significant gifts to help fund research for the past 25 years.

John also received Notre Dame's Sorin Award, which is presented to a graduate who has rendered distinguished service to the University and his/her community. When accepting the Sorin Award, John said he believed there are two parts to a complete life. One part is success, the other significance. He said, "Success is important because it makes education, care of family and a reasonable life style possible. Significance is about making your life count. They can be simultaneous or sequential, but without significance, one's life cannot be a success."

John seized every day. He swung for the fences, always. He shared his blessings with many. He loved his family, travel, silly jokes, playing tennis and golf, and all dogs, most especially his Mulligan.

John/Dad/Grandpa/Pa/Gpa ... We love you and will miss you so much. Rest in comfort knowing we will be together again one day.

In lieu of flowers, Marilyn requests anyone wishing to do so write a note sharing a memory of John, to be put into a book the family is compiling.

"We will never be the same as we were before this loss, but are ever so much better for having had something so great to lose." Leigh Standley.

To plant trees in memory, please visit our Sympathy Store.
Published by PL-Lake from Feb. 19 to Feb. 25, 2021.
MEMORIAL EVENTS
No memorial events are currently scheduled.
To offer your sympathy during this difficult time, you can now have memorial trees planted in a National Forest in memory of your loved one.
Funeral services provided by:
Wenban Funeral Home, Ltd.
GUEST BOOK
4 Entries
From Bonnie Bruce and me, condolences. Fondly remember the JDRF dinners in Chicago and Milwaukee. Bonnie is in memory care, but still remembers working with John at Profexray with smiles.
Paul Aspinwall
February 23, 2021
Knowing John and working with him at the Neighborhood Health Clinic was a highlight of my career. My respect and admiration for John is enormous and he will remain in my memory as a man who cared deeply about others and was devoted to making the world a better place...which he did! I am grateful to have known John and his amazing family. Rest in peace, John.
Nina Gray
February 19, 2021
Loved life to the fullest; John will be missed
Gary
February 19, 2021
Mr. McDonough was truly a humble gentleman. I have fond memories of his kind and unassuming manner and engaging stories. His greatest legacy is his loving family whom I am honored to know and work with. May John rest in peace and the McDonough family be comforted by the nearness of his love that remains among them.
Lydia Nadolski
February 18, 2021