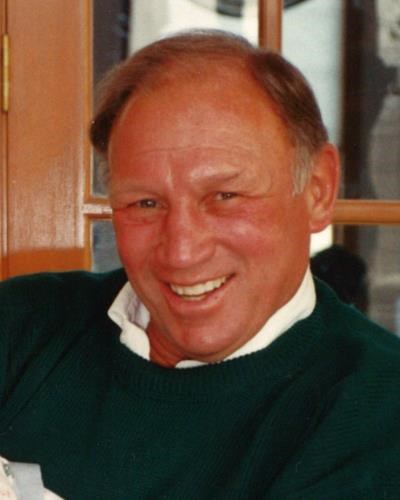 Kenneth Robert Gorgal, 87, of Northbrook and Vero Beach, Florida, passed away May 8, 2016 surrounded by his family. Ken, born on February 13, 1929 was the only child of Alexander and Florence Gorgal of Peru, Illinois. He grew up in Peru and attended the town's St. Bede Academy, a private Catholic high school. His father had played professional football in the 1920s for the Rock Island Independents, an early NFL team. Ken played quarterback on the St. Bede's football team. In 2000, he was inducted into St. Bede's inaugural Hall of Fame. Ken went on to play college football and baseball at Purdue University from 1945-1950 where he played as a quarterback and punt returner. Ken set a school record that stood for more than 50 years in 1948. During the summer of 1950, Ken played baseball for the Gainesville Owls and the Dallas Eagles before playing football for the Cleveland Browns. He played on the 1950 and the 1954 Cleveland Browns' NFL Championship teams. Cleveland head coach, Paul Brown, considered Ken one of his nicest players - he was known as "Gurgles Gorgal," the coach once said, because he "added so much fellowship and good feeling to our team." In 1954, Sportswriters named him a first-team All-Pro. He left the Cleveland Browns for a two-year stint in the U.S. Army during the Korean War. He was stationed back home in Peru and ran background checks for the Army's Counterintelligence Corps. Then he returned to the Cleveland Browns. He was traded to the Chicago Bears in 1955 and went to the Green Bay Packers in 1956. Following that season, he retired from football. Ken's off the field career included owning a membership at the Chicago Board of Trade as well as managing his insurance business. Ken is the beloved husband of Sheila Kemper Gorgal for 34 years; loving father to Diane (Richard) Eaton, Denise (late Albert Jr.) Giannotti, Mark (late Faye) Gorgal, Renee (Jack) Beam, and stepfather to John (Ann) Weimer, Jeff (Carol) Weimer, Matthew Weimer and Melissa (Mike) Grady; cherished grandfather of Jessica and Nick Eaton, Alyse and Cole Giannotti, Megan, Jack, Brad and Tom Weimer. Ken was a kind-hearted person with a quick wit and had a passion for life. He didn't know a stranger, making friends and talking to everyone he met. Family and friends will gather to celebrate Ken's life on Thursday, May 19 starting at 10am followed by the mass at 11am at St. Norbert Church, 1809 Walters Ave., Northbrook. In lieu of flowers, a contribution to St. Bede Academy, Memorial Fund for Ken Gorgal, 24 W US Hwy 6, Peru, IL 61354 in Ken's honor is much appreciated. Funeral information 847-998-1020.

To plant trees in memory, please visit our Sympathy Store.
Published by Chicago Tribune from May 14 to May 15, 2016.
MEMORIAL EVENTS
May
19
Memorial Gathering
10:00a.m.
St. Norbert Church
1809 Walters Ave., Northbrook, IL
May
19
Funeral Mass
11:00a.m.
St. Norbert Church
1809 Walters Ave., Northbrook, IL
Funeral services provided by:
N.H. Scott & Hanekamp Funeral Home
MAKE A DONATION
MEMORIES & CONDOLENCES
9 Entries
I remember Ken being a great neighbor and friend to my father. I had the joy of coaching jeff in little league. All the Best to the family during this grieving period. ken was always welcoming to me when he saw me in the neighborhood and always stood out as a good man. Sorry for your loss, Rick Pyle
May 27, 2016
Rick Pyle
May 27, 2016
Shelia and Family,
My condolences to the entire Gorgal family over Ken's passing. He was truly a great person and great friend to our family and will be greatly missed. I considered him a family member and viewed him as an uncle. The stories he shared with me over the years are worthy of a best seller without question. He will be missed and may his memory be eternal.

Love, Steve Assimos and family
steve assimos
May 19, 2016
Dear Shelia. I've just learned in a round about way of the death of Ken and I feel bad that you've lost him. I well remember the beautiful Shelia and my long time Saturday golfing partner. We had some good times in our old Northbrook neighborhood. When we went our separate ways we kind of disconnected. Shelia, I send you my sincere sympathy and wish you well. Love and Kisses, Rocky Pyle
May 18, 2016
Dear Gorgal Family,

Was saddened to read of Ken's recent passing. I will always remember him as our wonderful and competent broker. He was always a pleasure to work with treating us with the utmost respect. Please know that you are in my thoughts at this difficult time.

Lynne Rodman
LBS Limited Partnership
Lynne Rodman
May 17, 2016
Ken was a Triple "A" person with a personality and sense of humor to match ~ always segueing life straight into a joke ~ I knew him briefly but he will make me laugh always -
Roberta Kipp
May 16, 2016
I am deeply saddened by the news of Ken's passing. I had the honor and privilege of working with Ken at T.A Cunnings Jr. Co. He was a kind gentleman with a great sense of humor. My thoughts and prayers are with the Gorgal family.

Larry B. Zindell
Larry Zindell
May 15, 2016
Our condolences and best wishes are with the family of Ken Gorgal, who was a great guy with a great family. He was always ready with words of encouragement, a quip and a smile. We will keep Ken and the rest of the Gorgal family in our prayers.
Steve Sale
May 15, 2016
Great stories, from a great coworker and friend. I will be sure to find you when I pass on as well. Much Love...
Doris Esposito/Gaylord
May 15, 2016
Showing 1 - 9 of 9 results