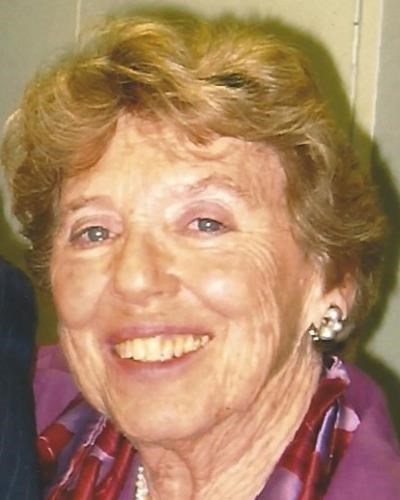 Marilyn "Toddy" Richman, nee Melvoin, 94, April 24, 2021. Loving daughter of the late Charles and the late Selma Melvoin, and sister of the late Hugo (Loie) Melvoin. Beloved wife of the late William S. Richman. Devoted partner of the late Dr. Alex Hilkevitch. Loving mother of Daniel Richman, Elizabeth (Mitch Dayan) Richman, and Ruth Richman. Adored grandmother of Sam (Jayme) Besser, Ariel (Yaakov) Sugarman, Wiley Kornbluh, and Rachel Kornbluh. Doting great-grandmother to Aviva, Naomi, and Liam Besser, and to Shayna Baila, Chavi, and Leah Sugarman. Loved by step-grandchildren Isaac (Talia) Dayan, Max (Mariya) Dayan, and Stanley (Sara) Dayan, and their 10 children. Beloved aunt and cousin to many. Toddy had a quirky sense of humor. She laughed freely and often. She would frequently break into song, prompted by a word or phrase someone had just spoken. She wrote a unique ditty for each child and grandchild. For special occasions, she composed funny, pithy poems in rhyming couplets. And when she felt moved, she jotted down more pensive reflections. She was a loving, creative grandmother and great-grandmother who kept a collection of costumes, musical instruments, puppets and props -- along with a puppet theatre -- upstairs in a spare room. The kids and their friends found it irresistible. She baked apple pies every Thanksgiving with her grandchildren and crafted classic family meals, like "upside-downside chili pie." There was a song for that dish, too, now sung by the great-grandchildren. Born in Chicago in 1927, Toddy grew up in Wilmette and attended New Trier High School, where she began a lifelong pursuit of acting. During and after attending Wellesley College, she was a stage and TV actress. Over the years, her flair for acting grew into an interest in drama's life-enhancing potential. Toddy was the founding director of the Institute for Therapy through the Arts and one of the founders of the National Association of Drama Therapy. She received her Masters of Education from the National College of Education and completed the Teacher Education Program at the Chicago Institute for Psychoanalysis. She taught drama therapy courses at Columbia College and National-Louis University. She served as registry chair for the National Association of Drama Therapy and presented workshops and papers for 23 annual conferences. During her time at ITA, she provided drama therapy for preschool and grade-school children, adolescents, and the elderly. She worked as a clinical consultant to the ITA staff and served as chairman emeritus of its board for as long as she was able. Toddy loved Judaism -- its melodies, its philosophies, its prayers. Over several years, she taught creative dramatics to children at Congregation Solel in Highland Park. A strong believer in the importance of Jewish education, Toddy served as a long-time member of the Board of Jewish Education of Metropolitan Chicago and was honored in 2009 with their "Rambam Award" for her service to the community. Always a fan of outdoor activities, especially fishing, she served as her childrens' Cub and Girl Scout leader. Toddy played piano, sang, and shared her appreciation for the arts with her children and grandchildren. She coordinated a wide range of family vacations that always had a learning component, exposing her kids to experiences that she rightly said we'd "appreciate more later." Toddy believed in inclusion, helping to keep our far-flung extended family connected. She was an optimist who believed that people are basically good at heart. She was full of love and kindness. She will be deeply missed by the many people she touched. To keep everyone safe and healthy, the service and interment are private. We will celebrate her life together some time later this year. In lieu of flowers, memorial contributions may be made to the Institute for Therapy through the Arts, 2130 Green Bay Road, Evanston, IL 60201, https://itachicago.org; or Makom Solel Lakeside, 301 Clavey Road, Highland Park, Illinois 60035, www.mymakom.org; or the Board of Jewish Education of Metropolitan Chicago, 3610 Dundee Road, Northbrook, IL 60062, www.bjeecc.info. To attend the funeral live stream, please visit our website. Arrangements by Chicago Jewish Funerals - Skokie Chapel, 847.229.8822, www.cjfinfo.com.

To plant trees in memory, please visit our Sympathy Store.
Published by Chicago Tribune on Apr. 26, 2021.
MEMORIAL EVENTS
No memorial events are currently scheduled.
To offer your sympathy during this difficult time, you can now have memorial trees planted in a National Forest in memory of your loved one.
Funeral services provided by:
Chicago Jewish Funerals
GUEST BOOK
11 Entries
Toddy was an inspiring instructor for me at Columbia College´s Interdisciplinary Arts in Education M.A. program. I was saddened to read of her passing, but am delighted that I was one of the lucky ones who was enriched by her teaching.
Rebecca Feinstein Goold
May 2, 2021
May her memory be a blessing. I met Toddy when I first came to work for the BJE in 1986. She and I had so much in common as experiential educators. We were kindred spirits that believed that Jewish education was about finding joy in what we were doing for our students. Her wisdom will be missed.
Alissa Zuchman, Director Board of Jewish Education / JTeach.org
April 27, 2021
Ruth, your mother was fabulous! I saw her frequently at Solel the years I was singing there as an adult, and then up until about 6 years ago when I'd take my mother to the Rabbi's Saturday morning Torah class. I couldn't get over how sharp and vibrant she continued to be! We always connected over drama and music therapy, and she was always so supportive of whatever I was doing. I can hear her voice in my head as if she's here! I'm sending you hugs and my deepest condolences on your tremendous loss.
Ellen Weiskopf Blank
April 26, 2021
Toddy has enriched many lives during her existence. Who she was will be in our memory as an example.
Leda Dantas
April 26, 2021
A Beautiful Life!
Toya Horn Howard
Acquaintance
April 26, 2021
I am so sorry for your loss. I will miss Toddy - she was a special person. Elizabeth's statements at the funeral were beautiful.
David Haase
April 26, 2021
This notice nicely conveys what a lovely person my Aunt Toddy was, a fixture within our extended family who will be deeply missed, but warmly remembered. Her memory will certainly be a blessing for us all for generations to come. L'dor va'dor.
Jeff Melvoin
April 26, 2021
Toddy definitely touched my life. My mother Judy was a good friend and colleague but I got to know her over the years as well. One memory I have that has stayed with me is that because of a wonderful recommendation letter Toddy wrote on my behalf, I got into the university of my choice. Toddy made a difference in so many ways and is missed already. ...sending my sympathy. -Debbie Holstein
Deborah Holstein
April 26, 2021
So fortunate to have shared one lovely day with Marilyn when she came to Whidbey Island to visit her son, my friend Dan Richman. She exuded energy, optimism, wit and kindness. I made me so glad for him and his beloved sisters to have been mothered by such a woman. Her lively/loving spirit continues through them.
Faith Wilder
April 26, 2021
Part of me feels as though I grew up in the Richman home! I spent so many wonderful times there and always felt a love and warmth from Toddy. She was a caring and cheerful person whose passing leaves this Earth a bit more lacking in the goodness she brought to it. Our deepest condolences to Dan, Lizzy and Ruthie
Ilan and Ahouva Halperin
April 26, 2021
I met Toddy 15 years ago when I joined the BJE Board of Directors. Meetings were filled with her sage advice, built on a lifetime giving to those around her.Her smile, laughter,and good counsel will be sorely missed.My sympathy to all.
Michael Halpern MD; President of The Board Of Jewish Education Of Metropoli
April 25, 2021