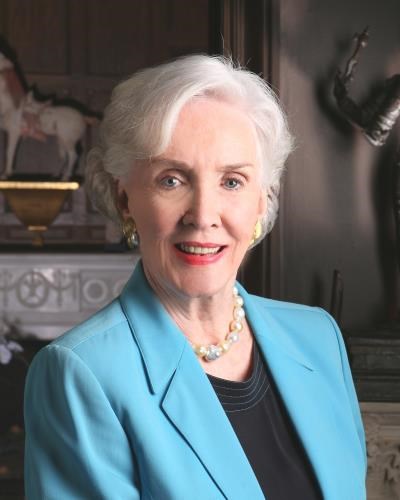 Jeffrey (Wilhelmina), of Seattle, her daughter Lynne, of Chicago, and by six grandchildren and fifteen great-grandchildren. With her husband, and after his passing on her own over the last three decades, she has been a passionate art collector and patron of the arts. She served for many years as trustee of the Art Institute of Chicago and made important contributions

to that institution, both in the form of art objects and of funding for the Alsdorf Gallery of South and Southeast Asian Art, designed by renowned architect Renzo Piano. A memorial reception in her honor will be announced at a later date. In lieu of flowers, contributions to the Art Institute in her memory would be the best way to honor her legacy. Funeral arrangements by Wm. H. Scott Funeral Home 847-251-8200.

Published by Chicago Tribune on Aug. 4, 2019.
To plant trees in memory, please visit our Sympathy Store.
MEMORIAL EVENTS
To offer your sympathy during this difficult time, you can now have memorial trees planted in a National Forest in memory of your loved one.
Funeral services provided by:
Wm. H. Scott Funeral Home
MAKE A DONATION
MEMORIES & CONDOLENCES
6 Entries
To Jeff, Lynn and the entire Alsdorf`s family, I wish to Express my sincere condolences to you. I just heard of her passing and I am so sorry. She was a gem to me and I admired her. I should say she was Chicago's finest and best. A beauty beyond belief.A person of style and virtue. May she rest in eternal peace with the Lord and angels.Again I am so,so sorry. RIP Chief.. from Esther Hale..
Es
September 17, 2019
To the Alsdorf Family my deepest expression of sympathy for the loss of Marilynn.It was my pleasure to have known Marilynn for some fifty years. As an Interior Designer I was fortunate to work with her on some of her Design projects. .She was sophisticated , intelligent and extremely interested in the Arts an enthusiastic collector of some of the most eclectic ethnographic crafts ,
to the finest of fine Arts. I always looked forward to our meetings and discussions with her.I remember one time Marilynn had an open house for some of her friends; While a guest standing in her bedroom remarked Marilynn who is the embroiderer of the lovely monogram on your pillow? Marilynn
smiled, Oh thats not my pillow that's Marie Antoinette's!
Marilynn was a remarkable woman, and a vary generous one, leaving much of her collection for everyones enjoyment. We will miss you Marilynn, The Arts miss you God Bless you.
Sincerely Edward L. Goettler MA
Edward L. Goettler MA
August 10, 2019
In loving memory of a wonderful person. We will love you and miss you always.
robert lock
August 9, 2019
Edward L. Goettler ma
August 8, 2019
Dear Alsdorf Family:

I am so sorry for your loss.
August 5, 2019
Dear Family of Marilynn ,
I was terribly sad to learn that Marilynn
passed. Anything that I can say or do at a time like this will be of little comfort. You and
your entire family have my deepest sympathy.
Most sincerely.
Liz Stiffel
Lisbeth Stiffel
August 5, 2019
Showing 1 - 6 of 6 results