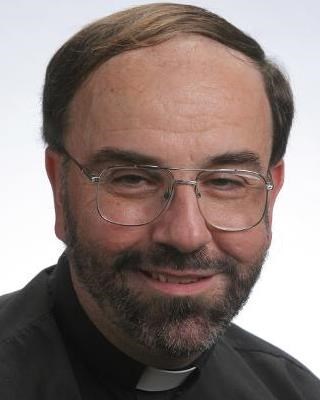 BORN
1952
DIED
2020
Fr. Mark W. Andrews, S.J., 68, recently of Chicago, Illinois, passed away on Thursday, November 5th after a long struggle with cancer. Mark was born on September 29, 1952 in Chicago, Illinois. Before entering the Jesuits, he earned a Bachelor's Degree in Theology from DePaul University (1974). Mark entered the Society of Jesus on September 12, 1981, at Berkley, Michigan, was ordained a priest on June 13, 1992 and professed final vows on February 2, 2003.

After his ordination, Mark earned a Master of Education degree from Boston College (1993) before teaching at Loyola Academy in Wilmette, Illinois for a few years. In 1996, Mark was missioned to Loyola House Jesuit Novitiate as an associate novice director, where he served for 5 years. Continuing his work in spiritual ministries, Mark was assigned to Bellarmine Jesuit Retreat House in Barrington, Illinois, where he served as retreat director, superior of the Jesuit community and acting director of the retreat house. In 2011, he became a spiritual father at and the vice-superior of Arrupe House on the campus of Loyola University Chicago (2011-2018). In August of 2020, Mark moved to a Jesuit infirmary in Wisconsin to care for his declining health and passed away there among his fellow Jesuits.

He was preceded in death by his loving parents Stanley and Helen Andrews. Mark was the beloved brother of Gregory (Anne) Andrews, Rochelle Andrews (William Murdock) and Sharon (John) Niemet and uncle to four nieces and a nephew. He also is remembered fondly by his aunt, uncle and numerous cousins.

Due to Covid-19 restrictions, the Mass of Christian Burial will not be open to the public but will be livestreamed on November 21 at 10:00 am at https://youtu.be/zWKlQB5p-Fw.

In lieu of flowers, memorial may be made to: USA Midwest Province of the Society of Jesus, 1010 N. Hooker Street, Chicago, IL 60642 or Jesuit Volunteer Corps at: www.jesuitvolunteers.org or American Cancer Society at: www.cancer.org

To plant trees in memory, please visit our Sympathy Store.
Published by Chicago Tribune from Nov. 15 to Nov. 23, 2020.
MEMORIAL EVENTS
No memorial events are currently scheduled.
To offer your sympathy during this difficult time, you can now have memorial trees planted in a National Forest in memory of your loved one.
GUEST BOOK
6 Entries
Remember Mark from our days at Marist High School (he was Class of '70 and I was Calss of '69). He was kind, had a shy smile and a good heart. We served together tutoring kids in the community.
My sympathies to his family, both relatives and fellow Jesuits
Mark Mayo
Classmate
November 20, 2020
My Deepest sympathies to Sharon, Greg and Shelly. You and your families will be in my prayers. Mark was a great guy . I have great memories of all you being at the Peterson. God Bless Mark may he Rest In Peace.
Tim Glynn
November 19, 2020
Rest in peace, fellow 1970 Marist Classmate!
gary marfise
Classmate
November 17, 2020
A wonderful listener, prophetic and holy. Mark was humble and aware of God’s call in his life that he followed in spite of the pain he suffered. As a Spiritual companion and friend, Mark will be missed. Great sense of humor too!
Acacia Komelasky
Friend
November 15, 2020
WHAT A WONDERFUL PRIEST AND CONFESSOR.
HE WILL BE MISSED.
JIM DAHL
Friend
November 15, 2020
May the family find peace and comfort
Reginald
November 15, 2020