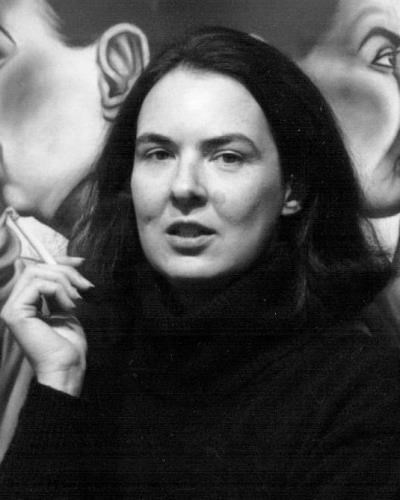 BORN
1948
DIED
2017
Nancy Hild passed away from this earth in the early morning hours of March 21, 2017, after a defiant and celebratory battle with lung cancer. She died at her home in Oaxaca City, Mexico, watched over by her beloved dogs and surrounded by her adopted family. Two weeks prior to her death, she attended the opening of her last art exhibition at Espacio Copal in Oaxaca. Nancy was born in 1948 in Cincinnati, Ohio to Mary (née Adkins) and Ray C. Hild. Valedictorian of her high school class, she attended the University of Missouri-Kansas City and the Kansas City Art Institute. She received a B.F.A. and an M.F.A. from the University of Indiana-Bloomington. Nancy moved to Chicago in the mid-1970s and became a highly respected artist. Over the years, her work was shown at numerous Chicago galleries including Betsy Rosenfeld Gallery, Ann Nathan Gallery, Las Manos, Womanmade, and Gescheidle. Nancy was also a long term member of the historic women's cooperative gallery, Artemisia. Nancy was a lecturer and a teacher, a graphic designer, and a Chicago landlord. Her loft building on North Avenue was well known as a gathering spot for creative and minor miscreants of many stripes. She acquired national infamy when her sculpture, Be-Bop a Re-Bop (aka Lois, part of the highly successful Cows On Parade) was stolen from the streets of Chicago. Over the course of her life and career, Nancy traveled and exhibited worldwide. To cite a few of her many shows: she was part of the Illinois Women Artists exhibition at the National Museum of Women's Art in Washington D.C. and was an American representative for the Shanghai in the Eyes of the World Artists in the Peoples Republic of China; she created an on-site artwork for L'Arbres des Ancetres in the Republic of Benin, West Africa, and was part of the Glasgow, Scotland exhibition, Artemisia @ Transmission. In 2002, Nancy began her gradual relocation to Mexico, first in Juchitan then Oaxaca City. In these two places, she became, once again, a highly respected artist. Initially, she moved back and forth between Chicago and Mexico but ultimately she lived full time in her home in Oaxaca. Nancy's art was exhibited in numerous galleries and cultural centers in both cities. Nancy Hild was generous to a fault, had an infectious and ribald sense of humor, and was always kind. She loved the ridiculous. She was a consummate and masterful artist, a voracious reader of international scope and a disciplined writer. She promoted and identified with magical realism, universal symbolism, Zapoteca and matriarchal cultures. Nancy had an unbounded love of animals and was implacable in her support for both women's and animal rights. She embraced the vibrancy of life in Chicago, Juchitan and Oaxaca. Nancy is survived by her sisters in spirit and soul, Muffy McAuley, Darla Masterson, and Linda R. James; by her devoted caretakers, Judith Murguia and Alejandro Gonzalez Gomez and her dear friends, Ursula Rusch and Giovanna Galán among so many others who loved her, were touched by her, and will miss her greatly. Memorial funds: United Poultry Concerns of Machipongo, VA.; Farm Sanctuary of Watkin's Glen, N.Y., Women's Global Education Project of Oak Park, IL; Chicago Coalition for the Homeless, and Womanmade Gallery of Chicago. There will be a celebration of Nancy's life and work at Las Manos Gallery in Chicago on Saturday, June 3rd, 2017.
To plant trees in memory, please visit our Sympathy Store.
Published by Chicago Tribune on May 21, 2017.
MEMORIAL EVENTS
Jun
3
Celebration of Life
Las Manos Gallery
, Chicago, Illinois
GUEST BOOK
2 Entries
I'm going to miss you. I wish we could have had more time to know each ter better.
Diane
October 2, 2017
I'm so sorry for your loss, may these words from our Heavenly Father bring you comfort - Jeremiah 29:12, 13.
AH
May 21, 2017