Richard BOYELL
Richard "Dick" Boyell, musician, composer, arranger, beloved by many, passed away peacefully in his Chicago home, on January 8, 2011. Beginning his career as a musician in the Pump Room, he went on to become a premier producer of music for the ad industry. He produced several of his own albums and also scored for film. He is survived by his loving wife, Charlotte; children, Jeff (Kathleen) and Paula Palmer (Brian); two grandchildren, Adam and Rachel Palmer; and brother, Charles; nieces, Deborah Pitrack (Howard) and Geraldine Boyell. Funeral service Friday, 12 Noon, at the Weinstein Funeral Home, 111 Skokie Blvd., Wilmette. Entombment Rosehill Cemetery Mausoleum, Chicago. In lieu of flowers, please make donations to the charity of your choice or to the American Cancer Society, 225 No. Michigan Ave., Suite 1210, Chicago, II. 60601-7833. For further info 847-256-5700.

To plant trees in memory, please visit our Sympathy Store.
Published by Chicago Tribune on Jan. 12, 2011.
MEMORIAL EVENTS
No memorial events are currently scheduled.
To offer your sympathy during this difficult time, you can now have memorial trees planted in a National Forest in memory of your loved one.
Funeral services provided by:
Weinstein & Piser Funeral Home
GUEST BOOK
18 Entries
I had the pleasure of speaking with Dick in 2007 while producing a pilot radio show for CBC in Toronto, Canada. I contacted Dick by telephone regarding a album he produced in 1970 for Allied Van Lines entitled "Music to Move Families By". We did a recording of a phone interview conducted in 2007 and it was simply a whole lot of fun. I was able to mail my copy of the Vinyl LP to Dick as he did not have a copy of his own work! Even though I only knew the man for a few passing moments, wow, what moments they were. And what a very very nice (and talented!) man Dick was. My very best to Dick's family and friends.
Otis Fodder
June 17, 2011
I wrote a song with Dick for a little movie called Gnosis in the early 1970's. Steve Goodman recorded it for us. Dick was the sweetest, most talented man...a real gentleman. It was fun to write with him and sing out to the skyline outside the window. I believe music is the language of heaven, so he will be fluent in the language of the angels. God Bless you, Dick.
Paula Shapiro-LaBrot
April 4, 2011
Dick was the rarest of gentle men; gifted in so many ways, and always the sunniest part of any day we found ourselves in the studio. He and Char were always a joy with whom to work, and an honor to know as friends.
My thoughts are with his family, and the many friends who feel this loss but were blessed by his presence in their lives.
Michael Paradise
January 29, 2011
I am Dick's first cousin, his Dad and my Dad, Harry, were brothers in Chicago.I am saddened at Dick's death and send my love and condolences to his family. Barcy Boyell Grauer
January 27, 2011
I haven't seen Dickie since I was a young woman. I moved away from Chicago & lost contact with many family members but Dickie always remains one of my best loved cousins. His mother, Myrtle, & my mother Hazel were very close sisters & were very proud of Dick's accomplishments. I offer my deepest sympathies to all his family members & friends. He will be missed by all. Respectfully, Jorgie Winsberg Soto-- Albuquerque, NM.
Jorgie Winsberg-Soto
January 15, 2011
Char, I am so very sorry for your loss may God comfort you in such a hard time. Patty Mullins
Patricia Mullins
January 13, 2011
There are so many things I could write, but my heart is weeping right now. And so, to you Char, and the rest of Dick's family, I send my condolences and my love. I worked with Dick for many years and he taught me so much about music and kindness and humor.
Nan Wolff
January 13, 2011
Dick was above all else a lovely man. He was a pleasure to know and work with. He brought his sense of humor to everything he did. I loved knowing him. I have a huge lump in my throat knowing he is no longer with us.
betsy simson
January 13, 2011
"Wanna watch Boyell work his magic?" Music to the ears of a 12-year-old boy, from a father who was as faithful to his composer/arranger as he was to his wife of 58 years. Every industrial show or film produced by my dad (Dave McDermand) included Dick's genius. Dick's creative gift was rare enough; that talent, coupled with such a sweet and genteel nature, is the essence of why we are all better people for having known him.
Paul McDermand
January 13, 2011
Dear Paula, I will always remember our special lunch "dates" with your father, back in the FCB days. He had such a gentle way about him, and an undeniably sweet spirit, which I see so much of in you. My love and sincere condolences to you and your family.

Your Friend, Cindy
January 13, 2011
Dear Char:
We will always have fond memories of our visits with you and Dick during summer evenings on the patio.
We will miss him. Such a great guy.
Our thoughts are with you.
Hans and Sharon
January 12, 2011
My dear Charlotte. I'm so happy that you and Dick were married and I'm so very sorry for your loss. Dick was such a wonderful person....good and kind to everyone. He will be missed by everyone.
charlotte caesar bosworth
January 12, 2011
Dear Char,
Dick was one of a kind - talented, joyful, inventive, and with a leprechaun nature that wouldn't quit. I'm so proud to have known him both as a professional and as a person. The world is a sadder place without him in it.
Love,
Rich
Rich Manners
January 12, 2011
Sincere condolences, Charlotte. Though I left Chicago about a decade ago, I will always treasure the times I worked with Dick. He was a gentleman and a talent. He will be greatly missed.
Melinda Perrin
January 12, 2011
We will miss Dick so very much. It was a pleasure to be in his presence in any situation. Always a smile and warm conversation. His sessions were always fun and interesting thru the years.
Our thoughts and prayers to Dick's family and especially to you Char.
Bob and Pat Wessberg
January 12, 2011
Dear Gloria, Jeff and Paula - My sincere condolences over the loss of your dad. I haven't seen him in such a long time, but every time the jingle "the Incredible Edible Egg" comes on, I let everyone know that my cousins' dad wrote that.........!! Hope you are all well and know that I keep up with your lives through my mom. 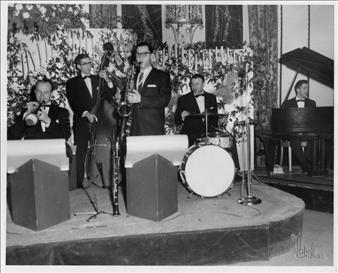 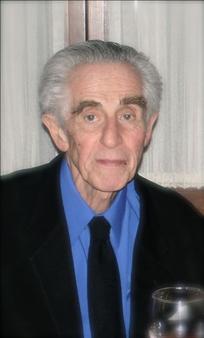 I will miss Dick. He was a wonderfully talented, charming, classy guy. His passing is, for my family, the end of an era. The end of the easy, eloquent reminiscences about the Pump Room days; the funny stories about inappropriate music bookers and gigs-gone-bad. He leaves a spot that won't be filled. My heart goes out to Dick's family and all who loved him.
Irwin Keller
January 12, 2011