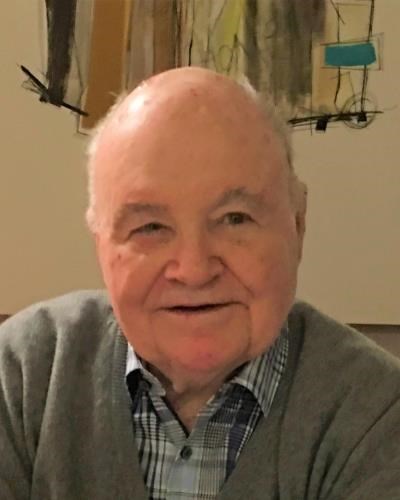 BORN
1929
DIED
2021
On Thursday, January 21, 2021, Robert "Bob" McAllister passed away at home with his family by his side at the age of 91. Robert was born September 24, 1929 in the Bronx, New York to Robert F. and Mabel (Schmidt) McAllister. He was a Sergeant First Class in the US Army. He fought in the Korean War and was the recipient of the Bronze Service Star. He received both his undergraduate (1955) and law degree (1959) from Boston College. He was a proud Eagle and loyal supporter of BC his whole life. On November 29, 1958, he married the love of his life Eleanor (nee Mullane). They raised two daughters, Deirdre and Elizabeth. He began his career as a labor lawyer at Dow Jones and was very proud of that time in his life. He was Vice-President of Labor Relations at the Sun Times/Daily News. From 1980-2015, Robert was a well-respected and admired arbitrator. He took his ethical and professional responsibilities seriously and valued his role as a mentor. Robert was an athlete his entire life; in his youth he ran track, as an adult he was an avid tennis player and downhill skier. He loved to cook. Robert was a lifelong subscriber to the Chicago Symphony Orchestra and was always up for hearing live jazz. He loved relaxing in his garden and filled the house with roses. He kept up on current events and loved a good debate. Robert is lovingly remembered by his wife of 63 years, Eleanor, and their daughters Deirdre (Mark) Levine and Elizabeth (John Williams) and grandson Carter McAllister Levine. He is also lovingly remembered by his sisters Kathleen (Bob) Walker and Judith McAllister, his sister-in-law Margaret Laverty, and many beloved nieces, nephews, grand-nieces and grand-nephews.

Internment is private. In lieu of flowers, donations could be made to the Juvenile Research Diabetes Foundation (www.jdrf.org/illinois) or a charity of your choosing. To leave a message for the family, please visit DonnellanFuneral.com.

To plant trees in memory, please visit our Sympathy Store.
Published by Chicago Tribune on Jan. 24, 2021.
MEMORIAL EVENTS
No memorial events are currently scheduled.
To offer your sympathy during this difficult time, you can now have memorial trees planted in a National Forest in memory of your loved one.
Funeral services provided by:
DONNELLAN FAMILY FUNERAL SERVICES
GUEST BOOK
4 Entries
We shall miss Bob. It was so wonderful knowing him for the time he spent on this earth. He was a great conversationalist, enjoyed a good joke and always had a ready smile. He made one feel at ease in his presence immediately. We will be making a donation to the Juvenile Research Diabetes Foundation in his honor. We will also have a living memorial (perennial plant) for him. Our prayers go out to all of you who were his loved ones and all of his friends who will also miss him. In Bob's honor I am raising a martini to him.
Christopher & Beth Collins
January 25, 2021
I was lucky enough to work with Robert on our townhome complex’s Board of Directors. He was intelligent, hardworking, interesting, athletic, stoic and funny. I learned so much about life from him and his beloved Eleanor and will miss his counsel and spirit of living life to the fullest. He was a gentleman of the old school and will be missed by family, colleagues and friends.
Tana Hitch
Friend
January 24, 2021
Love of tennis and skiing was Robert´s passion. My heartfelt sympathies to the family
Lucas
January 24, 2021
Bob was a treasured and valued colleague. Whenever we had an arbitrator's conference, I tried to sit next to him because he was such good company. My deepest condolences to all the family. He will be missed by all of us in the arbitration community.
ann kenis
January 24, 2021