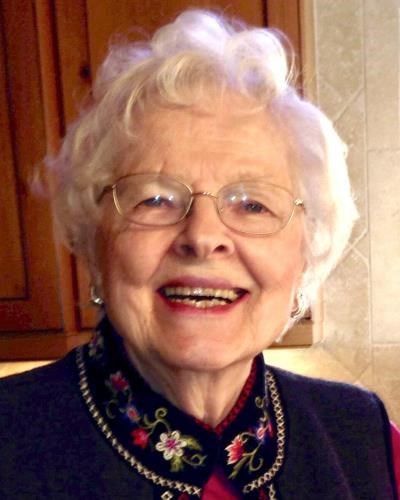 BORN
1924
DIED
2021
FUNERAL HOME
Evergreen Memorial Park
26624 N. Turkey Creek Rd.
Evergreen, CO
Roberta was born in Duluth, MN on January 6, 1924, and was the sixth of seven children from a loving and stable Slovenian family. Roberta always encouraged humor and contentment with life, rather than dwelling on the negative.

Roberta married Robert H. Berg in 1943 and settled down in 1949 in Elmhurst, IL and raised five children. Bob, a world class authority in fine particle technology, ran his independent consulting business from the lower level of their house while Bert was a homemaker upstairs running the family.

In 1995, Roberta moved to Evergreen, CO where two of her daughters lived. She was an avid reader, an accomplished watercolorist, a sharp card player, and loving, engaged grandmother. She moved to Clermont Christian Living in Denver in 2015. She died on September 25, 2021 in the loving company of friends, doing what she loved most - playing bridge.

Published by Chicago Tribune on Oct. 17, 2021.
To plant trees in memory, please visit the Sympathy Store.
MEMORIAL EVENTS
To offer your sympathy during this difficult time, you can now have memorial trees planted in a National Forest in memory of your loved one.
Funeral services provided by:
Evergreen Memorial Park
MAKE A DONATION
MEMORIES & CONDOLENCES
3 Entries
Mom´s light will forever shine in my memory
Andrea Berg Vaughn
Family
October 17, 2021
A model for the aging; she enjoyed her life until the very last hand of bridge.
David Hammond
Family
October 17, 2021
Our wonderful mother will be missed.
Carolyn Roberta Berg
Family
October 17, 2021
Showing 1 - 3 of 3 results