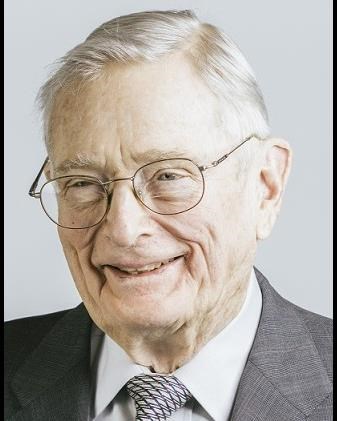 Rolf McMillan Gunnar, M.D., renowned cardiologist, teacher, scientific author, medical leader, veteran and philanthropist died on Saturday, March 18, 2017. He was 91 years old (d.o.b. January 22, 1926). Born into a medical family, Dr. Gunnar attended Northwestern University as a member of the V-12 Navy College Training Program designed to produce young officers during WWII, earning a B.S., M.B., M.S. in Pathology and in 1949 his M.D. degree. His medical residency at Cook County Hospital paused while he served as a U.S. Army Captain and Battalion Surgeon in the Second Infantry Division, earning battle stars at Bloody Ridge, Heartbreak Ridge and Iron Triangle in Korea. Upon learning that a seriously wounded American soldier was lying exposed to enemy fire, he moved through intense artillery fire to render medical aid, evacuated the man to the battalion aid station and was awarded the Bronze Star with V Device for Valor. Returning to the Cook County Hospital, he completed his residency, went into private practice in Berwyn, IL, with his father until 1959, and then went on to a fellowship in cardiology studying under Dr. Walter Goodale at the Harvard Medical School. In a distinguished academic career, training many well-known cardiologists and internists, Dr. Gunnar served as Director of Adult Cardiology and the Division of Medicine at Cook County Hospital; the first Edmund F. Foley Professor of Medicine and Director of the Section of Cardiology at the University of Illinois; Professor of Medicine, Chief of the Section of Cardiology and later Chairman of Medicine at Loyola University Medical Center. Nationally, he served as Chairman of the Board of Regents of the American College of Physicians, President of the Association of University Cardiologists and Vice-President of the American College of Cardiology. He was a member of Alpha Omega Alpha Medical Honor Society, a distinguished Master of both the American College of Physicians and the American College of Cardiology and a Fellow of the Royal College of Physicians (Edinburgh) and the Royal College of Physicians and Surgeons (Glasgow). In 1986, he received the Stritch Medal from Loyola University's Stritch School of Medicine, and in 2015 received the Physician of the Century Award for the Northern Illinois Region of the American College of Physicians. Dr. Gunnar's research interests included acute myocardial infarction as well as circulatory shock at a time when the discipline of cardiology was relatively new. He and his co-authors published more than 400 scientific papers and abstracts and he co-authored a published book on shock in myocardial infarction. He first developed his clinical skills at a time before the technology we take for granted today, and his legions of students were often amazed by his ability to predict what advanced cardiac testing would show. Reputedly he never lost the "Stump the Star" clinical challenge of analyzing a new case at the weekly Loyola residents and fellows conference. After a lifetime of service and commitment to healthcare for all, he "retired" and became Chair of the Board of Directors for BraveHearts Therapeutic Riding & Educational Center, a charity he co-founded with his second wife, Marge, and dedicated to serving children with disabilities, veterans and their families. His legacy of skill, service, compassion, education and care lives on in honor of his memory of those he touched in his first and second career. Dr. Gunnar is survived by his second wife Margaret Tautkus Gunnar; children, Jocelyn Gunnar Stevenson, Rolf McMillan Gunnar, Jr., William Peter Gunnar, M.D.; and grandchildren, Frederick Gunnar Stevenson, Ela Jane Carpenter, Thomas Geoffrey Stevenson, Elizabeth Overton Gunnar, M.D. Jocelyn Overton Gunnar, Warren Petrocella Gunnar, Audrey Petrocella Gunnar and great-granddaughter, Ismay Jane Carpenter. He was pre-deceased by his wife of more than fifty-five years, Merian Jane Gunnar, who passed in 2004, and his son Geoffrey Charles Gunnar, who passed in 1974. Visitation Friday, March 24, 2017, from 2:00 p.m.to 9:00 p.m.at Adolf Funeral Home, 7000 S. Madison Street, Willowbrook, IL, 60527. The funeral service will be Saturday, March 25, 2017, 10:00 a.m. at Grace Episcopal Church, 120 E. First Street, Hinsdale, IL 60521, with internment to follow at Bronswood Cemetery in Oak Brook. The family requests that in lieu of flowers donations be directed to BraveHearts, 7319 Maxon Road, Harvard, IL 60033 http://www.braveheartsriding.org. Service information: 630-325-2300 or www.adolfservices.com

To plant trees in memory, please visit our Sympathy Store.
Published by Chicago Tribune from Mar. 20 to Mar. 21, 2017.
MEMORIAL EVENTS
Mar
24
Visitation
2:00p.m. - 9:00p.m.
Adolf Funeral Home & Cremation Services, Ltd.
7000 South Madison Street, Willowbrook, IL 60527
Mar
25
Funeral service
10:00a.m.
Grace Episcopal Church
120 E. First Street, Hinsdale, Illinois
Mar
25
Interment
Bronswood Cemetery
, Oak Brook, Illinois
Funeral services provided by:
Adolf Funeral Home & Cremation Services, Ltd.
GUEST BOOK
16 Entries
My deepest sympathy on learning of the passing of doctor Gunnar. He had a vision for the modetn internal medicine
Practice. It is with a deep respect I send my sympathies and a friend of Dr. JOHN KEELY.
RESPECTFULLY ,
RICHARD POTTER
Richard Potter
September 30, 2019
What a fine physician and teacher he was. To this day, I think of Dr. Gunnar every time I have a patient squat as I listen for split heart sounds. This is one of the ways a man can live on forever.
Stephen Vincent
May 4, 2018
charles roeth,md
May 2, 2017
Dr. Gunnar was directly responsible for ensuring that I could advance myself in a Cardiology career. I will be forever greatful.
He was a great man and will be sorely missed .

David Koenigsberg MD
David Koenigsberg
April 27, 2017
Dr. Rolf Gunnar to an intern:
"The Best practice of medicine is a dialogue."
Thank you, Sir, for sharing your didactic wisdom to many cardiologists over the decades.
Robert Koch
March 25, 2017
Bernard Greenwald
March 24, 2017
The world has lost a wonderful man. My heart goes out to the Gunnar family in this great loss. Jocelyn was a high school classmate of mine. Rolf was a high school classmate of my mother.
Please accept my heartfelt condolences. Thank you Dr. Gunnar for your contributions and making this world a better place.
Joan Moorehouse Wainer
March 24, 2017
So sorry for your loss. What an incredible legacy he leaves behind. My thoughts and prayers are with you. HUGS!!!
Nancy (RBHS class of 1968)
Nancy McCabe Goble
March 24, 2017
My sympathy to Marge and Dr. Gunnar's entire family. The passing of this decent, compassionate man leaves our world a much poorer place. Marge, I will never forget the kindness and support you and he gave me during my son's illness and after his death. You will always be in my heart. You know where to find me if you need me.

With love.
Mary-Lou Carta
March 24, 2017
My thought and prayers are with you Marge during this sad time.
I will miss his smiling face at Bravehearts.
Kim Monack
March 23, 2017
Dr Gunnar's legacy lives on. I developed a love for the cardiovascular physical exam by watching and being taught at the bedside by him. In my 30th year as a cardiologist now I share that passion with medical students, residents and cardiology fellows when I tell them about Rolf Gunnar and what he could surmise by examining a patient WITHOUT his stethoscope.
Patrick Hughes
March 21, 2017
I was fortunate to have worked with "Dr.Rolf" and his father H.P. Gunnar as their med. lab supervisor in the 50s. He brought our office into his extensive knowledge of cardiology. A true gentleman and scholar. Know he will be truly missed.
Dolores Dupree
March 21, 2017
It has been a pleasure knowing Dr. Gunnar, and my life is richer for it. Since 1970 at Cook County Hospital until present day as a member of the BraveHearts Board, working with Dr. Gannar and Marge has been an invaluable experience. Compassion and commitment are not strong enough words to describe him. He will be sorely missed.
Dayle Marsh
March 21, 2017
Dr. Gunnar was the definition of class and compassion. It was my privilege to meet him when I volunteered at Bravehearts and I was amazed at his energy and commitment to the cause. Godspeed and thank you.
Sue Haslwanter
March 21, 2017
Dr. Gunnar's legacy of compassion, service and untiring commitment will forever live on. Our love extends at this time to Marge, the entire family and the BraveHearts family. We are all better people for having known Dr. Gunnar. Blessings to the family.
Tom & Barbra Schulte
March 20, 2017
Dr. Gunnar provided leadership, guidance and support for me while I was CEO at MacNeal Hospital in Berwyn, Il. He was an invaluable asset to that hospital as well as to the many he taught by example. The world was a much better place for his presence.