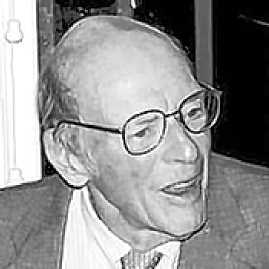 ABOUT
New Trier High School
Thomas Doyle Hoyt DDS, 85, of Lake Bluff, IL, formerly of Evanston, graduate of New Trier HS (1944), honorably discharged from the U.S. Navy Medical Corp and graduate of Grinnell College and Loyola Dental School, passed away on March 21, 2012. Although trained to follow in his father's footsteps as a dentist, Tom Hoyt found his business passion as publishing entrepreneur. In an amazing career that spanned 45 years he developed a highly successful family of dental publications which were sold in 1990. In his next venture, Tom joined his son Peter and played a crucial role as an adviser and the treasurer of Hoyt Publishing Company, which is now known as The Path to Purchase Institute. Tom was an accomplished runner, skier and fisherman. He was the beloved husband of Frederica (nee Fairman) "Freddie"; father of six, Joshua (Joanna Brown), Amy Knowlton (Jim), Darcy, Peter (Peggy), Phoebe Volla (Guido), Nathaniel (Amy); stepfather to Samantha Davie (Barrett) and John Marshall (Kalie). Tom was also the proud grandfather of 17. No visitation. Interment Private. Funeral Mass will be held at 11:30 a.m. on Saturday, March 24 at The Church of St. Mary, 175 E. Illinois Rd., Lake Forest, IL. In lieu of flowers, we encourage donations to the Dr. Thomas D. Hoyt Memorial fund at the National Parkinson Foundation, http://www3.parkinson.org/goto/TomHoyt Info. Wenban Funeral Home, Lake Forest, IL (847) 234-0022 or www.wenbanfh.com.

MWB, Chicago
March 26, 2012
To the Hoyt Family-
Far from your proud Chicago-roots, there are many of us remembering Thomas D. Hoyt today as the father of a son that we love dearly, and who's time with us at Boston College provided for a lasting friendship spawning four decades. At the outset, and certainly throughout the ensuing years, we have witnessed Peter's rare talents and keen motivation and have imagined its origins.

One fellow alum neatly surmised that Peter took to new heights what we all learned and embraced on The Heights at BC -- now, in reading this tribute to Thomas D. Hoyt we understand better the accomplished roots and lasting legacy that he carries so well.

Peter and Peggy, you and your entire family are in our thoughts and prayers today as you celebrate the life of a very special father, grandfather, and partner.
Joe Harkins
March 24, 2012
Dr. Hoyt can finely relax. My condolence to his family, God bless.
Dan Murphy
March 23, 2012
Peter and Freddie,

I am so sad for you and your family on the passing of Tom. He was a great man.

I consider myself fortunate to have worked with Tom and benefited by his sage advice on all aspects of B2B publishing. He was a great leader, mentor and friend to all of us at Hoyt Publishing.

Our thoughts and prayers are with you and your family.

Rich and Jamie
Rich Zelvin
March 23, 2012
Tom was my mentor, my inspiration, and my friend, and I am so sorry to hear of his death. I refer to him as one of the finest marketing minds in the dental industry, quote him often, and keep him in my memories.
Teri Reis-Schmidt
March 22, 2012
So sad to hear of Tom's passing. For all us early DPR-ers, he was an inspiration, mentor, friend, and an example of how to conduct business with dignity, integrity, and a little yelling once in a while. His legacy is far and wide.
Gail Weisman
March 22, 2012
Showing 1 - 8 of 8 results