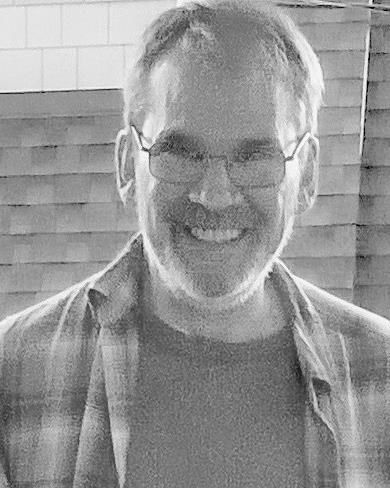 Tom Schlueter of Aurora, formerly of Naperville, passed away on December 30 after a long and courageous fight with cancer. Tom was a journalist, author, and musician. Most of his journalism career was spent writing for the Kane County Chronicle, where his columns usually informed, frequently charmed, occasionally perplexed - but always entertained his readers. Later in his career, Tom became the Public Information Officer for Kane County, where he served as the spokesman for all health-related information until he retired in 2019. Born and raised in Naperville, Tom graduated from Naperville Central High School and Northern Illinois University. He authored two books, both reflecting his interest in his family's history. His first book, "Mouse River," was loosely based on his ancestors' struggle to thrive in rural North Dakota during the 19th century, and was the product of extensive research on the places and people whose stories he endeavored to recreate. His second book, "Lake Journal," recounted adventures at the family cabin on Lake Julia. Built by Tom's grandfather in the 1950s, the cabin and the surrounding Wisconsin Northwoods captured Tom's imagination at a young age and remained among his deepest passions throughout life. In addition to his writing and love of nature, Tom was also a bit of a "history buff," taking a particularly keen interest in the great battles of World War II. His late father, Oliver Schlueter, served in the 11th Armored Division and was awarded a Purple Heart after being wounded in the Battle of The Bulge. His father's death at the early age of 53 catalyzed Tom's interest in and relentless pursuit of knowledge about the war. He relished the research and, in the relaxed comfort that follows an overindulged holiday meal (cup of coffee in hand), sharing his discoveries with his family. Tom's interests and accomplishments during his 67 years were wide and varied, but he may not have enjoyed anything more than music. He was a founding member of the Naperville garage band One More Time (to their legions of loyal fans - "OMT"). Every rock band needs a mellow "dude" like Tom on the bass guitar – sly smile, gentle sway, steadily plucking away at the low notes you can feel in your chest and which seem to sync your heartbeat to the pulse of the music itself. When he was jamming, he was in his element. His final public performance came last December, when OMT performed at Miss Kitty's in Naperville. While family and friends in attendance had no idea that it would be his "farewell concert," they are grateful for the memory and take comfort knowing that in the "Eternal Jam Session," the guitars never need tuning, the drummer never loses the beat, and the voices, naturally, are always angelic. Tom was preceded in death by his parents Oliver and Marion Schlueter. He is survived by his good friend, Janice Wells, and by his brother Pete (Julie) and sister Mindy (Greg) Millen. Tom - the "cool" uncle - is also survived by six nephews and nieces: Kent (Brandy) Millen, Katie (Aeron) Ogden, Christopher (Karin) Schlueter, Kurt (Judy) Schlueter, Shannon (Josh) Lemasters, and Scott (Aimee) Schlueter. He was loved by his grand nieces and nephews - Haley, Sydney, and Ozzy Millen, Avery, Tess, and Finley Ogden, Sophia, Charlie, and Olivia Schlueter, Juliana and Dean Schlueter, and Joaquin and Simone Lemasters. He will be missed! Services for Tom will be private. In lieu of flowers, donations may be made in Tom's name to St. Jude Children's Research Hospital. Arrangements by Beidelman-Kunsch Funeral Homes & Crematory. Info 630-355-0264. www.beidelmankunschfh.com

To plant trees in memory, please visit our Sympathy Store.
Published by Beidelman-Kunsch Funeral Home & Crematory - Historical Downtown Chapel on Jan. 6, 2021.
MEMORIAL EVENTS
No memorial events are currently scheduled.
To offer your sympathy during this difficult time, you can now have memorial trees planted in a National Forest in memory of your loved one.
Funeral services provided by:
Beidelman-Kunsch Funeral Home & Crematory - Historical Downtown Chapel
GUEST BOOK
2 Entries
Tom was such a kind person. I remember him as a reporter covering the County over 25 years ago. He was very astute and had real common sense and a great sense of humor. My deepest sympathies to his family.
Maureen Anderson
Friend
January 6, 2021
Tom I will plant a tree for you next time I am up north and pass through Three Lakes and Lake Julia. I know how much you loved it there. Will miss you and summer baseball radio in your office!!