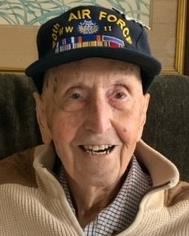 ABOUT
Senn High School
FUNERAL HOME
Cremation Society of Illinois - N. Clark St.
3824 N. Clark St.
Chicago, IL
William Rudolph Redlich, 100, passed away peacefully on November 22, 2021, at his home in Westminster Place, Evanston, Illinois. He was preceded in death by his cherished wife of 66 years, Ann, and his sister, Marylyn Patterson. Bill was the loving father of Susan Redlich of Cambridge, MA; Cathy Redlich (Rob Horwitz) of Ancramdale, NY; and Jim Redlich (Myra Epping) of Chicago. He was the beloved grandfather of Amanda Epping Redlich (Rahul Bhattacharyya); Margaret Epping Redlich; Jane Horwitz (Austin Cox); Elizabeth Rose Redlich; and Grace Horwitz; and the great grandfather of Advait Redlich Bhattacharyya and Griffin William Cox. He was also the uncle to eight nieces and nephews. Bill was born on September 11, 1921 in Rock Island, Illinois to Mildred and Rudolph Redlich, and grew up in Chicago. During the 1933 Chicago World's Fair, A Century of Progress, Bill marched every Thursday with his Boy Scout troop's drum and bugle corps, playing the glockenspiel and thrilling to the sights of the fair. He graduated from Senn High School in 1939 and Purdue University, Class of '44, with a degree in mechanical engineering. Bill joined the Army Air Force in 1943 and, during WW II, was stationed on the island of Saipan in the South Pacific where he was the flight engineer on a B-29 Super Fortress bomber. During his service, Bill flew 35 perilous missions over Japan and was awarded the Bronze Star, among other medals, for his heroic service in a combat zone. He ended his service as a First Lieutenant. Bill's memories of his war experience are part of the Library of Congress's Veterans History Project as well as the Smithsonian Air & Space Museum's "Voices of the Veterans". Upon his return from the war, Bill joined Eagle Sheet Metal Mfg. Co.in Chicago, where he rose to president. Bill and Ann raised their family in Winnetka. He was active as a Boy Scout troop leader, President of the District 37 School Board, a volunteer with the American Field Service student exchange program, a member of Rotary International, and a member of Northfield Community Church where he volunteered in many capacities and was honored for his commitment to the Good News Community Kitchen in Chicago. Bill and Ann also are the honorary parents and grandparents to the extended Tang family, refugees from Cambodia whom they assisted in establishing new lives in the U.S. over 40 years ago. Bill and Ann moved to Westminster Place in 2003, where Bill made lasting friendships, wrote for the Westminster Chimes, served on numerous committees, and worked to develop an internal TV broadcasting system to bring live programming to residents. Bill's intellectual curiosity was limitless, as was his love of travel to remote corners of the world. He said that "one can never truly know a country or its culture without spending time in a person's home," hospitality he extended reciprocally to visitors from abroad. At his 100th birthday party in September, Bill was celebrated for his life achievements, his sense of humor, and his love of family and friends. The values he modelled for his children and grandchildren remain his most precious gift. A private funeral for family members will be held on December 4, 2021, with a memorial service to be held on a date to be announced in 2022. Memorial contributions to William R. Redlich can be made to The Nature Conservancy at https://www.nature.org/en-us/membership-and-giving/donate-to-our-mission/other-ways-to-give/. Arrangements by Cremation Society of Illinois, 773-281-5058 or www.cremation-society.com.

Published by Chicago Tribune on Nov. 28, 2021.
To plant trees in memory, please visit the Sympathy Store.
MEMORIAL EVENTS
To offer your sympathy during this difficult time, you can now have memorial trees planted in a National Forest in memory of your loved one.
Funeral services provided by:
Cremation Society of Illinois - N. Clark St.
MAKE A DONATION
MEMORIES & CONDOLENCES
2 Entries
Bill and I spent several years setting up the in-house Broadcasting program at Westminster Place. He was the most intelligent and analytical individual that I had ever known. He always pushed me to be better than I thought I could be. I will miss him.
Ruth Zekowski
Friend
November 30, 2021
My sincere condolences to all the Redlich family. I knew Mr. Redlich through the Northfield Community Church. He was a dear man.
Meredith Wheeler
Friend
November 28, 2021
Showing 1 - 2 of 2 results