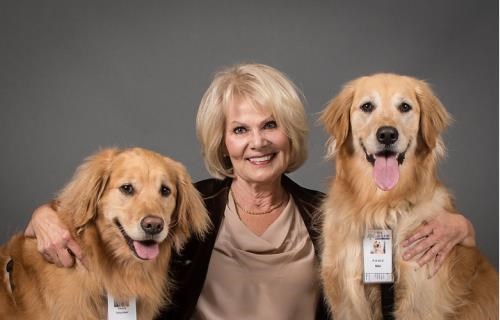 IRISH MCNEIL Irish McNeil lost her 10 year battle with a rare bone marrow disease in the early morning hours of February 17, 2021. She passed away at home with her husband and her two golden retriever therapy dogs, Niki and Lyla, by her side. With her striking beauty, quick wit, intelligence, motivation and dedication to a cause, she was an easy woman to admire, respect and fall in love with. Irish was born in a post war German refugee camp as her mother fled the invasion of the Russian Army. After 7 years in the refugee camp her family was able to immigrate to the home of relatives in Salt Lake City. As a German child in the US just after WWII she was ridiculed and bullied by students and teachers alike. In her mid-twenties she was the single mother of three young boys. Her hard work and dedication kept the boys fed with a roof over their heads and shoes on their feet. After becoming an outside sales rep for a large fleet maintenance company, she soon became one of the top sales people in the country. She was transferred to the Chicago area where she met and married her husband, Pete. Irish soon grew tired of the Midwest and was able to transfer to Eugene, OR. Becoming restless again she quit her sales job and started her own computer disk duplicating business, then a gift basket business and then became a "gentlewoman" farmer raising sheep, chickens, ducks and any other critter she saw at the feed store. After a short bout with breast cancer, she and Pete moved to Chico for the better weather. Irish soon made many friends in the Newcomers Club and was always busy with gardening and many other projects. When she was diagnosed with her bone marrow disease, Irish felt the need to get a dog and bring joy to other suffering people. She was soon blessed with Niki and Lyla followed 2 years later. Together they brought comfort, joy and tears to thousands of patients at Enloe Hospital, the ER, the Cancer Center and Enloe Behavioral Health as well as firefighters at the Camp and Carr Fire basecamps. As her diseased progressed she was no longer able to be in the hospital environment. She soon became a member of the Capital Campaign for Butte Humane Society and raised over $750,000 for the construction of their new facility. Irish was a blessing and a treasure to anyone who knew her. Irish was preceded in death by son Kasey and she is survived by Niki and Lyla, her husband Pete, sons Justin and Shane, daughter in-law Chelsy and granddaughters Alexis and Taylor. A Celebration of Life will be held at a later date. Contributions in her memory can be made to Butte Humane Society of Chico, CA.
Published by Chico Enterprise-Record on Feb. 21, 2021.
To plant trees in memory, please visit the Sympathy Store.
MEMORIAL EVENTS
To offer your sympathy during this difficult time, you can now have memorial trees planted in a National Forest in memory of your loved one.
MAKE A DONATION
MEMORIES & CONDOLENCES
Sponsored by ChicoER.com.
8 Entries
I am so sad to hear this news. Irish was such a beautiful person. I worked with her on the fundraiser called The Celebration several years ago. Then we reunited when she would come to my work to bring her doggies around to cheer us all up. What an Angel she was. I will miss her.
Deverie Jarrett
Friend
March 10, 2021
We met Irish through our Therapy Dog work. Irish always had a smile and lots of energy and enthusiasm for the therapy program at Enloe and the for the work at Butte Humane Society. Her creativity was amazing and we enjoyed each and every time we got together for a visit. Irish and her 'girls' provided our parents entertainment and comfort while in Enloe. Irish was a leader, a kind and lively lady....we will miss her. Our warmest condolences to Pete and all of Irish's family.
Dot and Dave Morris
Friend
March 4, 2021
I first remember meeting Irish at a Butte Humane event her at Chapelle de L’Artiste. I was struck by her beauty and how much she resembled a much younger version of my mother.

Irish emanated kindness and gentleness and was the epitome of politeness. She was easy to admire and to love. I am so grateful to have made her acquaintance.
Melissa Schuster
Acquaintance
March 2, 2021
I'm so sorry to hear this. Irish was an amazing woman that would come visit us at Build.com with her therapy dogs and make all of us smile. She will be missed.
Krista
Acquaintance
March 1, 2021
I meant Irish in 2011. I was a cancer survivor myself and a volunteer at the cancer center in Paradise. We both belong to Newcomers as well. She was always so sweet and so kind and I will send some thing nice to say with a smile on her beautiful face. The last time I saw her was in my cancer came back this year and I was at the cancer center here in Chico at Philadelphia Square when sheCame in to get her shot. We had a nice conversation that day that was the last time I got to see her. My prayers are with you.
Toni Johnson
Friend
February 24, 2021
I meant Irish probably around 2011. We were both members of Newcomers and we were both cancer survivors. I worked at the Cancer Center as a volunteer in addition. She always had a smile on her face and she was I was very kind. My cancer came back this last year and she came in for one of her shots to the cancer center in Chico and I was there having one of my chemo treatment. She was very sweet to me that day and extremely complementary that was the last time I got to see her. I had no I had no idea that she had been in a camp in Germany. Because of her first name I always thought she was Irish. What a sweet lady and a beautiful lady it was a privilege to know her.
Toni Johnson
Friend
February 24, 2021
Enloe Radiation Oncology loved her and her girls soo much. We will miss her forever. ❤❤❤ God Bless her family. ❤❤❤
Jacque Wells
Coworker
February 21, 2021
Irish McNeil, my friend, you made an impact in everyone's lives! Our journey together included Pilates, Celebration Life and leisure get togethers. I miss you so much. You became invincible, your strength and endurance through this cancer was above and beyond. Your keen sense of humor kept me in stitches, your love and compassion for animals tied us even closer as you taught your dog to pray for our Cody when he was taken from us. You will always be my hero Irish. Our code we decided upon during celebration life remains my friend, "I think I love you" Love always, Beth