BORN
1932
DIED
2015
FUNERAL HOME
Newton-Bracewell Cremation and Funeral Services
680 Camellia Way
Chico, CA
JAMES PATRICK SWEENEY James Patrick Sweeney, 82, passed away in Chico on July 31, 2015 surrounded by his family. He was born in Oakland, Ca on Nov. 4, 1932 to Irish immigrants Bridget Agnes Walsh and Michael Patrick Sweeney. Step father Patrick Joyce also had a wonderful influence in his life. He attended St. Francis de Sales Catholic School in Oakland and graduated from Hayward High School along with his future wife Gen in 1950. He moved to Chico in 1967. Jim served in the US Army from 1954-1956 in Fort Belvoir, VA. He received his bachelor's degree in 1957 and master's degree in 1959 from the University of Calif. Berkeley. Completed his internship in hospital administration at Herrick Hospital Berkeley in 1958 and then served his residency at Stanford University Medical Center. His first administrative positions were at Elko General Hospital in Nevada; University of Calif. Medical Center San Francisco, and Prebysterian Medical Center also in San Francisco. We would like to thank Jim's neighbors and especially Pam who have been his friend and watched over him for many years. Also Dr. Verma, Dr. Sam Brown and the nurses and staff on DCU gave him excellent, compassionate care. He loved to travel the world and spend time with his grandchildren and great-grandchildren. Survivors include his wife of 36 years Kathy; daughters Kristy Cox of Redding and Michele (Steve) Scheurmann of Carmichael; grandchildren Cody Henderson of Chico, and Baily Henderson of Carmichael; sister Sharon Joyce of Woodland; sons James of Alaska, Michael (Jennifer Borenstein) of Davis and Patrick of Nevada City; daughters Colleen Sweeney, Jeneen (Rob) Thacker, Cathleen (Jimmy) Greenlee, and Maureen Sweeney; grandchildren Kaelen (Sarah) Davis, Ryan Davis and Claire Davis, Corrie (John) Logan, Matthew L. Thacker, Madeline Greenlee, Analise Greenlee all of Chico; Sophia Sweeney, Anabelle Sweeney of Davis; Jenna Sweeney and Krista Sweeney of Nevada City. Great grandchildren Santino. Quincy, Kingston, Jackson, Willa, Jack, Riley, and new baby Kaylee. A celebration of Jim's Life will be held at the Enloe Conference Center, 1528 Esplanade, Chico on Sat., Aug. 8th at 1:00 p.m. Donations may be made in James Sweeney's memory to the Enloe Pediatric Dept. Newton Bracewell Chico Funeral Home is handling arrangements. We will miss you "May God hold you in the palm of His hand".
To plant trees in memory, please visit our Sympathy Store.
Published by Chico Enterprise-Record on Aug. 5, 2015.
MEMORIAL EVENTS
Aug
8
Celebration of Life
1:00p.m.
Enloe Conference Center
1528 Esplanade, Chico, CA
Funeral services provided by:
Newton-Bracewell Cremation and Funeral Services
MAKE A DONATION
MEMORIES & CONDOLENCES
Sponsored by ChicoER.com.
17 Entries 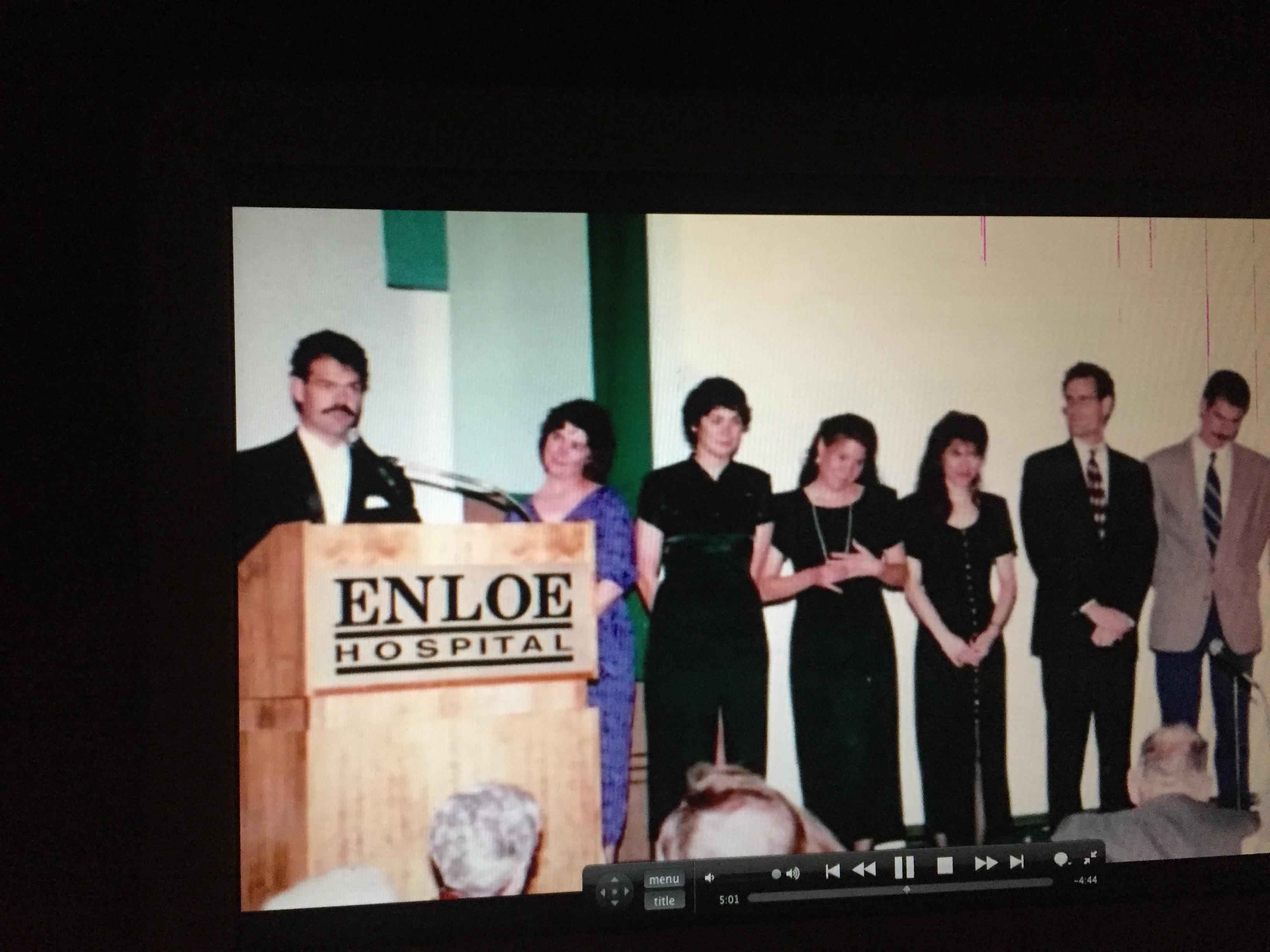 Thank you all. Such loving comments. He truly thought of all of you as Family. You all touch his heart. He felt so blessed. He said the staff was amazing. He was humble. He did not think you all remembered him. Again thank you from all of us 7 kids and all his grandchildren. Maureen Sweeney
Maureen Sweeney
February 25, 2020
A memory...At the 1984 Enloe Christmas party Jim Sweeney not only remembered my name, he knew my job and was genuinely interested in how I was getting along. I had only been working there a short time, and had met him only briefly at orientation.
In 40 years of hospital work, I never met a better or kinder administrator. That's the honest truth.
February 23, 2020
I always remember Mr Sweeney as the kind hearted man who would shake me
Roxana Brooks
November 16, 2015
oops oldest nephew misses being able to call his him.
August 11, 2015
Kathy and all,
Thank you for all the wonderful memories, condolences. We all miss him very much. As his oldest said he misses being about to call him. I feel blessed to have had him as a Dad. Maureen Sweeney, one of my Dad's many children.
August 11, 2015
Jim was a very loving and compassionate man. He loved life, his children and served the city of Chico at Enloe Hospital for most of his lifetime. Our families (O'Hara's, Hagerty's, Walsh's, O'Sullivan's) are so grateful to have enjoyed his passion for life. He will be truly missed and admired for all the good he brought to humanity. We will miss you Jim, your smile, your love and your positive attitude. May you rest in peace and watch over us all! Love Patrick and the entire O'Hara family.
PATRICK OHARA
August 10, 2015
Our condolences to the family. He was an amazing man with a great contribution to our community. He was a loving father and we know he will be missed.
Sincerely,
Jane (MacKinnon) Haberman
Ron Haberman (Auto Doctor)
August 8, 2015
p.s. Irony: I forgot to add my name to the entry about Mr. Sweeney remembering my name. Melissa Nicholaw
August 7, 2015
Mr. Sweeney was a very special man. On my first day at Enloe, he came to my office to introduce himself. I felt very humbled. He never addressed me with just a hi. He always remembered my name, even thirty years later when we crossed paths in the grocery store!
August 7, 2015
It was a pleasure to work for Mr. Sweeney. He was Enloe. He always spoke to everyone. Took a genuine interest in the people that worked for him.
leanna mckanna
August 7, 2015
What an honor it was for me to work with such a wonderful and generous man. Mr. Sweeney was so personable, a trait that made everyone he encountered feel like part of the Enloe Family. His dedication to the community through Enloe Medical Center was unwavering. He truly cared about us all!

Debbie Silveira
Durham, California
August 6, 2015
What an honor it was to work for this amazing man. He will always be remembered as a kind and generous man. God really did receive a special angel. God bless each of you. Rochelle Gardiner.
August 6, 2015
I worked for Mr Sweeney at Enloe hospital as well. What stands out is that he didn't want our patients to be "A number", he wanted NAMES. Also that he felt whether you were an employee or a patient, you were part of "The Enloe family". It was and is an honor, Sir. Hazel Fields, RT (R)(M), ARRT
August 6, 2015
I am happy to have met ye, and rest peacefully in heaven now. God Bless!
Love, Sandy
August 5, 2015
What a remarkable individual! I had the distinct pleasure to work with Mr. Sweeney (as we called him) for a number of years at Enloe Medical Center. I think about my tenure there, as well as what a great boss he was, with much fondness. My best to his family.
Andrea Demetras
August 5, 2015
His name was James Patrick Sweeney.
Kathy Sweeney
August 5, 2015
Mainly the name James <3
August 5, 2015
Showing 1 - 17 of 17 results