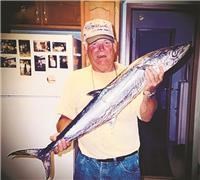 BORN
1938
DIED
2021
Gerald E. Strom of Chiefland, Florida, formerly of Goodland, Minnesota, passed away September 9, 2021 in Gainesville, Florida.
Gerald was born April 4, 1938 in Grand Rapids, Minnesota to Ernest and Lydia Strom. Gerald attended grade school in Goodland and graduated from Nashwauk High School. He lied about his age so he could join the Army in 1955. He served in Okinawa and in the National Guard. He served until 1960 when he returned to Minnesota and married his grade school sweetheart, Nancy Wehde.
He worked for the US Postal Service in Minneapolis for a while and when the mines started hiring in 1965, he was hired and moved back "Up North." He worked for 30 years at Hanna Mining Company and National Steel in Keewatin and retired in 1995. He spent most of his retirement years in Florida where he was a member of the Eagles, American Legion, Am Vets, Moose Club, and Suwannee River Boat Club. Just days before the Lord took him home, he said some of his favorite memories were the Fourth of July picnics with his kids and fishing with his dear friends, Ray and Alice Pletcher. His kids thought he must have also enjoyed clearing trees from acres of land and peeling poplar as well.
Gerald was preceded in death by his parents, Lydia and Ernie; his three brothers, Wally, Dale, and Roger; his wife of 48 years, Nancy, and an infant son.
Gerald is survived by his wife of 11 years, Shirley; three daughters: Kim Strom of Coldwater, Missouri; Karen (Karl) Flier of Backus, Minnesota; and Kathy Kennedy of La Grange, North Carolina; one son, Ken Strom of St. Michael, Minnesota; nine grandchildren, and ten great grandchildren.
A celebration of life will be planned at a later date.
Published by Chiefland Citizen from Sep. 16 to Sep. 30, 2021.
To plant trees in memory, please visit the Sympathy Store.
MEMORIAL EVENTS
To offer your sympathy during this difficult time, you can now have memorial trees planted in a National Forest in memory of your loved one.
MAKE A DONATION
MEMORIES & CONDOLENCES
0 Entries
Be the first to post a memory or condolences.