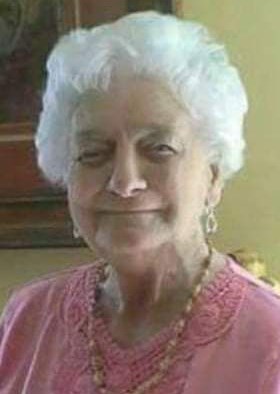 Betty J. (Iverson) Hall, born June 3 1925, died on Sunday, July 18 2021 at the age of 96. June 3, 1925 Henry and Alba (Kjostelson-Chestleson) Iverson of Menomonie, Wisconsin welcomed their fifth child, Betty Jane Iverson. Betty was blessed with unforgettable blue eyes and a truly genuine smile. She loved her Norwegian heritage and had fond memories of her Norwegian grandparents who emigrated from Norway.

On November 14, 1943, Betty married Harold A. Hall of Cornell, Wisconsin. Harold and Betty were married for 62 years when Harold passed away in 2006. In 1950, Harold and Betty loaded up and headed out west in an old Model A with a rumble seat to what would be the family's forever home in Wenatchee, Washington with their two children, Bob and Karen. Betty was carrying Susan who was born in 1951. In 1953 Sandy was born then Rick in 1958. Betty loved sports. She attended every sporting event she possibly could have just to watch her grandchildren and great-grandchildren play, especially baseball and football. She herself played and coached women's softball in Wenatchee into her 70's. She also was an avid bowler for years. One of the many things she enjoyed and probably her favorite thing was playing cards. She was our Pinochle queen. She played twice a week up until two years ago at the senior center in Wenatchee. She was the most forgiving and generous mother and grandmother to a fault. She gave in many different ways to anyone in need especially her family. She was a very no-nonsense or frills person and we all adored her for it. Both Harold and Betty were Charter members of the church they helped build, Celebration Lutheran Church, East Wenatchee.

Betty was survived by her three daughters: Karen Thompson and Susan Boden, both of Wenatchee, and Sandra Thomas of Peshastin; and one sister, Jeanette Schleusner of Menomonie, Wisconsin. Betty also has nineteen grandchildren and several great-grandchildren. She was preceded in death by her husband, Harold; sons, Rick and Bob Hall; and two grandchildren, Dustin Boden and Christine Hall.

Those of us who knew Betty also were aware she didn't really care for flowers at funerals due to memories of her young fathers passing. She would have preferred that a donation be made to Celebration Lutheran Church, East Wenatchee or Wenatchee Valley Senior Activity Center, Wenatchee in lieu of flowers. Betty's life will be celebrated on Thursday, July 29, 2021 at 1:00 p.m. at Celebration Lutheran Church, 801 8th Street NE, East Wenatchee. She will be entombed with her husband, Harold, at Evergreen Memorial Park Mausoleum. She will be missed by all.