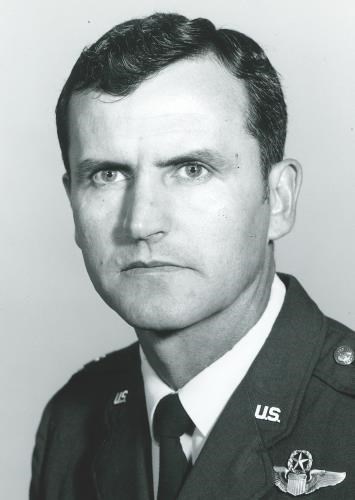 Dan was born on June 23, 1933 in Ladysmith, WI to Herb and Ruth (Black). He attended the Ladysmith schools and began his military career with the Air Force Reserve in 1952. In 1953 he entered active duty as an Aviation Cadet. A year later he was commissioned a 2nd Lieutenant and received his pilot wings.

Over the years he served at numerous bases throughout the U.S., as well as in North Africa, Japan, Thailand and Vietnam. He was a Fighter Pilot, Instructor Pilot and Reconnaissance Pilot and flew a variety of high performance jet aircraft including the F- 86 Saber and the RF – 101 VooDoo.

On April 2, 1966, while on his 170th combat mission Dan was shot down while over North Vietnam and was taken prisoner. He would spend the next, nearly seven years as a POW. In February, 1973, following the Paris Peace Accords he was repatriated.

After a three year tour with the Air Training Headquarters in San Antonio, Texas, he retired from active duty. Dan returned to Wisconsin and continued flying for the next 15 years as a Charter Pilot at the Eau Claire airport.

Visitation will take place on Saturday, July 3, 2021 from 11:00 a.m. until 1:00 p.m. at St. Olaf Catholic Church, 3220 Monroe St., Eau Claire. A Mass of Christian Burial is scheduled for Saturday, July 3, 2021 at 1:00 p.m. at St. Olaf Catholic Church with Fr. James Kurzynski officiating. Internment will take place at 1:00 p.m. on Tuesday, July 6, 2021 at the Northern Wisconsin Veterans Memorial Cemetery near Spooner, WI. All are welcome to attend and celebrate Dan's life.

Lenmark-Gomsrud-Linn Funeral & Cremation Service is assisting the family. Online condolences may be expressed at www.lenmarkfh.com.

Published by The Chippewa Herald on Jun. 30, 2021.
To plant trees in memory, please visit the Sympathy Store.
MEMORIAL EVENTS
Jul
3
Visitation
11:00a.m. - 1:00p.m.
St. Olaf Catholic Church
3220 Monroe St, Eau Claire, WI
Jul
3
Mass of Christian Burial
1:00p.m.
St. Olaf Catholic Church
3220 Monroe St, Eau Claire, WI
Jul
6
Graveside service
1:00p.m.
Northern Wisconsin Veteran's Memorial Cemetery
N4063 Veterans Way, Spooner, WI
Funeral services provided by:
Lenmark-Gomsrud-Linn Funeral and Cremation Services
MAKE A DONATION
MEMORIES & CONDOLENCES
Sponsored by Lenmark-Gomsrud-Linn Funeral and Cremation Services.
7 Entries
Dan´s son Doug and I attended the same grade school for a short time. This was right about the time Dan had gone missing in Vietnam. Being very young, I did not understand the situation, but knew Doug and his family were brave and alone. They were the nicest family. When I got to meet Dan years later, I was impressed by his quiet, friendly demeanor, and his genuine interest in others. He was a good man and will be missed!
Perry Kuznar
School
July 3, 2021
I am so very sorry for your loss, Terry. With deepest sympathy, Dorothy Kostka Buchholz
Dorothy Kostka Buchholz
Friend
July 2, 2021
I met Daniel one time a few weeks ago and I cared for him and his wife for 4 hours. I got to know Dan while I was there and got to meet his son from Tomahawk and his granddaughter with the little baby. I was shocked to read about his passing. Dan was a very nice man and had love for his family and military background. Even though I only knew him for 4 hours..it felt like it was longer. I´m sorry for your loss and may God be with you all through this difficult time. Jeff J. Geroux Caregiver, Visiting Angels
Jeff Geroux
Other
July 1, 2021
My parents thought highly of Dan. They always told me about him. I am very sorry for your family's loss. I know Frank and Betty Mezera will be greeting him in heaven.
Pam Mezera Nesbit
July 1, 2021
Dan, to a true American Hero: May God's angels guide you to your heavenly home. Rest in Peace my friend
Daniel G Cavanaugh, MD, Col USA (Retired)
June 30, 2021
Dear Dave, Kim, and Doughty family, Please accept our sympathies on Mr. Doughty´s passing. While we never met him in person, we respect and pay tribute to his service, his sacrifices, and his life. Love to all, Steve and Carol
Steve and Carol
Other
June 30, 2021
Dear family, I was moved to read about Dan being a POW & making it out alive & returning to a life of function. I am sorry for your loss. Blessings on you all.
Dr James M Abens
June 30, 2021
Showing 1 - 7 of 7 results