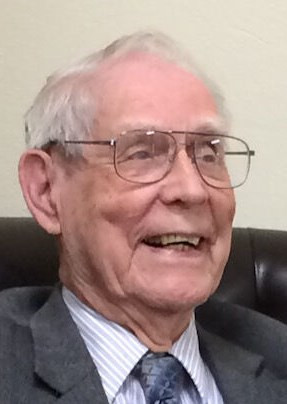 Earl was born on February 3, 1919, to Walter and Velugu (Edman) Carlson in Apple River township, Polk County, Wisconsin seven miles north of Amery, WI. He married Gladys Lundberg in 1945 after his ordination from Augustana Seminary. They faithfully served the Lord in the eight congregations to which they were called: Chandlers Valley and Berea, PA; Big Rapids, MI; Harvey, Kewanee, and Berwyn, IL; and Brainerd, MN.

In 2000, they moved from their South Long Lake Minnasota cabin/House to Woodland Acres Senior Living in Brainerd, MN and then in 2012, to the Chippewa Manor Retirement Community, Chippewa Falls, WI where Earl lived until shortly before his death.

He was preceded in death by his wife, Gladys in 2013; and sister, Lucille Peterson Stone in 2008.

Earl will be remembered for his love of all God's people, his laughter, his jokes, his faithful service to the gospel and his gratefulness to God for His grace.

The funeral will be at Our Savior's Lutheran Church 1300 Mansfield St, Chippewa Falls, WI with a visitation at 9:30am followed by the service at 11:00 am. The committal service for both Earl and Gladys Carlson will follow at 3:00 pm in Balsam Lutheran Church Cemetary in Amery, Wisconsin.