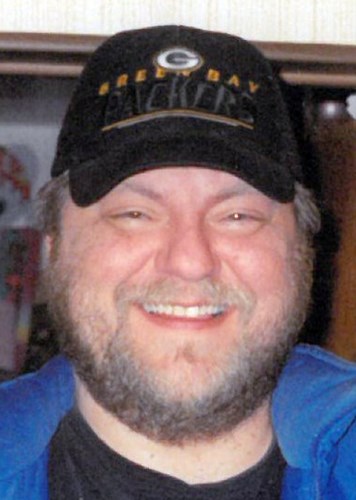 Michael was born in Chippewa Falls on August 28, 1963, to James Matthew and Henrietta (Wittrock) Campbell. He graduated from Chi Hi in 1981. Michael met his wife, Erma Swanson, while attending Chi Hi. They were married on September 24, 1983, and had a daughter, Kayla, and a son, Christopher.

Michael worked at Alliance Plastics until becoming disabled in 1999, at the young age of 35. The medications he took for his diseases gave him 21 years but likely contributed to the liver cancer that took his life. Battling a lung and kidney disease the past 20+ yrs, the toll the disease and medications took on his body, to the new fight starting on the recently diagnosed liver cancer, he never gave up for a second.

Michael battled his diseases with strength, spirit, and humor. His body may have been wracked with pain, eventually putting him in a wheelchair, but his ability to laugh with others helped him continue to fight. Michael was a gifted storyteller and could easily bring us to tears of laughter recounting stories from his childhood or really, any story he heard that was funny. He told them in such a way, we all laughed tears.

Michael had a mischievous spirit from birth. From being the Hulk to his nieces and nephews, to playing jokes on his teachers in high school, he had people laughing. Well, maybe not the teacher who found his chair superglued to the floor and had to pull out his desk, sit down, then pull in his desk in front of the entire class. Everyone else was laughing though. His exploits were never mean or bad, just spirited and full of joy of life.

Some of Michael's passions were painting, model-building, and history. Michael enjoyed tinkering on cars until he could no longer do that. He would have made a great mechanic had he not gotten sick. He also loved camping and fishing with his family. His greatest passion was his family. His wife, daughter, son, and grandchildren were his number one love and commitment always. Daddy and Papa were his favorite names.

Michael was best friends with his wife, daughter, and son. He supported them by working hard until he got sick. Later he became the best friend to his grandchildren as well. He was their hero. Larger than life. A hole has been left in our hearts that can never be filled.

One of Michael's closest friends was his doctor, Dr. Anton Kidess. Michael fully trusted him and credits Dr. Kidess with getting him through 21 years, long past what he should have lived. The family thanks Dr. Kidess for his many kindnesses, his medical knowledge that gave Michael more years, and his friendship.

He was preceded in death by his beloved parents, James Matthew and Henrietta Grace Campbell and several in-laws.

A memorial service will be held at 5 p.m. Thursday, June 10, 2021 at the Horan Funeral Home in Chippewa Falls. Pizza to follow (Mike's favorite).