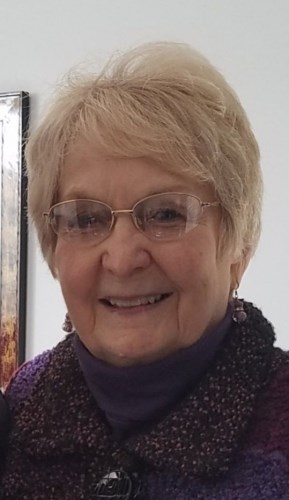 Sally Katherine Todd passed away on November 5, 2021, at the age of 85. She was surrounded by her family. Sally is survived by her daughter, Kimberly Shelford (Tim), and son, Hon. Jeffrey Todd (Sheila), and grandchildren, Noah and Katherine. Sally was predeceased by her husband, son Kevin, parents and aunt.

Sally came from humble beginnings. She was born in Marion, Indiana, but moved to Indianapolis when she was 10 years old. There, she graduated from Howe High School and later completed the Radiography Program at the Indiana University Medical Center. While working as a radiology technician, Sally met her husband, Dr. Jackson Todd. After marriage, the couple moved to Marion.

Sally loved Marion and Grant County, and she believed in giving back to her community. She served as President of the Marion General Hospital Board of Directors and was co-founder of the MGH Lights of Love program. She also served on the Boards of Carey Industries and Family Service Society, where she was instrumental in creating the local Women's Shelter. Sally further served the community as a Marion School Board member, a CASA worker, and a member of Tri Kappa Sorority. Sally was also active in Delphian, and she served as an Elder at Westminster Presbyterian Church.

Sally constantly educated herself by reading one or more books each week and keeping current on events. She would often read while watching TV news and listening to the radio, yet she had the uncanny ability to recall weeks later exactly what she read, viewed, and heard.

While not a gifted athlete, Sally loved sports and was fiercely competitive. She was a formidable duplicate bridge player and a passionate supporter of the Marion Giants, Indiana Hoosiers, Chicago Cubs, and motorsports.

Sally lived a full and rich life. She cherished her family and friends. She was a great listener and the first to offer a helping hand. She was a woman of immense character and never complained about anything, except a bad call from an umpire or referee.

Memories may be shared online at www.nswcares.com.

Published by Chronicle-Tribune on Nov. 5, 2021.
To plant trees in memory, please visit the Sympathy Store.
MEMORIAL EVENTS
Nov
13
Visitation
10:00a.m. - 11:00a.m.
Temple Congregational Church
1006 N. Western Ave., Marion
Nov
13
Funeral service
11:00a.m.
Temple Congregational Church
1006 N. Western Ave., Marion
Funeral services provided by:
Needham-Storey-Wampner Funeral Service - North Chapel
MEMORIES & CONDOLENCES
Sponsored by Needham-Storey-Wampner Funeral Service - North Chapel.
4 Entries
Please accept my sympathy on the passing of Sally. I always appreciated her kindness and willingness to help others. She was always willing to give to the community. I am sure she will be missed. My prayers are with you today and in the days and weeks to come. God bless your family.
Carole Matchette
November 11, 2021
Profoundly sorry for your loss. Sally was one of my Mom's closest friends and over the years I heard so many amazing stories about the Todd family. She and the Doc were great people who impacted the lives of so many.
George Rogers
Friend
November 8, 2021
Our condolences. She was a great person, as was your father.
Steve and Bonnie Tuttle
November 6, 2021
It is with great sadness, Sherrie and I read of the passing of Miss Sally. She was a great friend and I always enjoyed working with her on Elections and talking with her when we would see each other out and about. Always enjoyed our talks and we will greatly miss her and Heaven is getting a wonderful addition. We look forward to the day when we can again cross paths and just sit and talk. Rest in peace Miss Sally (My Friend), and say Hello to Dr. Jack when you see him again.
J. Mark & Sherrie Florence
Friend
November 6, 2021
Showing 1 - 4 of 4 results