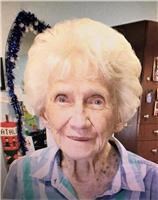 BORN
1922
DIED
2021
FUNERAL HOME
Chas E. Davis Funeral Home
3075 S. Florida Ave.
Inverness, FL
Bertha U. Siegl-Podwys was just sixteen days short of her 99th birthday when she passed away peacefully early evening Friday November 12th, 2021, in the care of Hospice with her family by her side.
Born on November 28th, 1922, raised on her family's farm in Berwick Pennsylvania as the twelfth of thirteen children by Paul and Bertha Urban. As a young child, Bertha enjoyed playing outdoor sports with all her older brothers. So, it's no surprise that she would pursue a career which would do something involving planes. Her career started with Grumman Aerospace as a part assembly worker, and later with Northrup Grumman Aerospace as a bookkeeper. While working with Grumman Bertha joined their Bowling and Golf teams and excelled and asked to be on the company's team of competition in both area of sports which would involve travelling within the United States and playing against other company teams in which she won several single and team tournaments and accumulated a vast collection of first place awards.
During this time at the brink of the United States entering World War II Bertha met and married Private Godfrey H. Siegl who would later become Spec Tech II as an Interpreter for the U.S. Army. They married June of 1942 in Brooklyn, New York and upon his return they had four children and moved to Hicksville, Long Island, NY.
Bertha remained betrothed until his death in April of 1981. Upon her husband's retirement in 1976, they relocated down to Citrus County Florida, where they purchased a home at the residence in the town of Inverness. Bertha obtained her GED at the age of 65 and Bertha continued to serve her community as a school bus driver and later as a driver of the Handicap school bus for a total of 10 years in the school system.
It was not too long before Bertha met Stanley Podwys a retired Ford Engineer while taking ballroom dance lessons which led to their marriage in October of 1987. Together, they shared the same common interest of flying airplanes, enabling her to finally complete her lifelong dream in obtaining a Pilot license June 23rd 1990, at the age of 68. Over the years, Bertha enjoyed life and traveling the world over with her new husband. She was a proud member of the 99er's Club of Women Pilots in the Florida Suncoast Chapter. She also relished the time she shared with family and friends on outings and functions.
She is preceded in death by both of her first husband Godfrey H. Siegl and her second husband Stanley Podwys. She is survived by her four children: Joan Rudolph of Floral City, Fl, Godfrey "Fred" Siegl Jr. and wife, Judy Siegl of Paw-Paw, Mi, Jean Holloway of Beverly Hills, Fl and Robin Dombroski of Brooksville, Fl, seven grandchildren Debbie Rudolph of Ocala, Fl, Dawn Libardi of Floral City, Fl and Jessica Kubik and Fred Siegl 3rd of Dowagiac, Mi, Jeffrey Holloway of Berwick, Pa, Andrew Dombroski of Brooksville, Fl and Brynn Dombroski of Charlotte, NC and five great Grandchildren: Jacqueline Libardi of NY, Vincent Libardi of Floral City, FL . Allyssa, Dylan, and Lily of Dowagiac, Mi.
A Celebration of Life Service is scheduled for Saturday, November 20th at 11:00 AM at the Chas. E. Davis Funeral Home.
Published by Citrus County Chronicle on Nov. 17, 2021.
To plant trees in memory, please visit the Sympathy Store.
MEMORIAL EVENTS
Nov
20
Celebration of Life
11:00a.m.
Chas E. Davis Funeral Home
3075 S. Florida Ave., Inverness, FL
Funeral services provided by:
Chas E. Davis Funeral Home
MAKE A DONATION
MEMORIES & CONDOLENCES
2 Entries
I knew Bertha through the 99s and get-togethers at the Crystal River Airport. She was a warm, caring woman with wit and spunk as well. She will be missed.
Meredith Kupcho
November 21, 2021
I loved all of our weekly phone calls when I was living in NY and all of the holidays we spent together year after year after I moved down to Florida. I wish your caretaker had let me know you had taken a sudden turn for the worse so I could have told you that I love you one last time. May you rest peacefully in Heaven Grandma
Dawn Libardi
Family
November 18, 2021
Showing 1 - 2 of 2 results