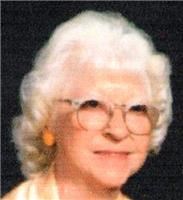 BORN
1929
DIED
2021
FUNERAL HOME
Brown Funeral Home
5430 West Gulf to Lake Hwy
Lecanto, FL
Esther C. Wilson, 92, of Inverness, FL passed away September 11, 2021 under the loving care of her family.
She was born on March 29, 1929 to Benjamin H. and Verna R. Norton in Altoona, PA. A Housekeeper and store clerk for most of her life. Esther moved to the area sometime in 1978, and had attended Trinity Baptist Church. She was a freehand Artist who sketched, and created beautiful oil paintings, she enjoyed gardening, crafting, and watching the birds and wildlife. Esther graduated from Trinity Bible College as a Valedictorian ; was a wonderful motivational speaker, played accordion & sang, also for a time, she was a Sunday school teacher.
She was preceded in death by all of her siblings, great-grandson Russell Johnathan Harper and great-grandson Justin Michael Harper. Esther is survived by her daughter Linda Lukehart grandchildren: Anita Rountree, Russell & Brenda Harper grandson and daughter in law; great-granddaughter Charlinda N. Harper, niece Rebecca Grace Hurley and many, many more extended family and friends including Susan Lemus & Family, Doris Thompson, Jason Ritter, Deborah Sullivan & Ed Eichhorn.
A Celebration of life event will be decided and announced to family and friends at a later date.
Private cremation is under the direction of Brown Funeral Home & Crematory in Lecanto, FL.
Published by Citrus County Chronicle on Sep. 16, 2021.
To plant trees in memory, please visit the Sympathy Store.
MEMORIAL EVENTS
To offer your sympathy during this difficult time, you can now have memorial trees planted in a National Forest in memory of your loved one.
Funeral services provided by:
Brown Funeral Home
MAKE A DONATION
MEMORIES & CONDOLENCES
5 Entries
The words haven't been invented to explain how memorable loveable and absolutely a blessing to be around . Esther ( grandma) there will never be another like you . May you soar in heaven and bestow your love on all that loved you .
Jason ritter
September 29, 2021
Our deepest sympathy on your lose, our prayers going out to you .
Linda ( Wingfield ) Johnson & Vernon Wingfield
Friend
September 17, 2021
WE ARE SO SORRY FOR THE LOST OF YOUR MOTHER WHAT A BEAUTIFUL WOMAN SHE SHARED SO MUCH OF HER LIFE
june scarmeas
Other
September 16, 2021
Grandma was the brightest, biggest and most formidable woman that I had the honor and pleasure to know. I remember growing up, when I spend the night with my sister, Anita, and grandma would practice her Sunday school lessons on us to make sure she had it right. Grandma, I love you so much and miss you so very much! My you Rest Easy In Paradise until we meet again. Give everyone my love and hugs.
Doris (brat 2) Thompson
Family
September 16, 2021
I love & miss you so very much, mom. Thank you for being there for me all my life & for also allowing me the honor of being there, & taking care of you in your later years to the end. I know we'll all be united again someday. Lots of love & hugs from earth to Heaven. Your daughter, Linda
Linda Lukehart
Family
September 16, 2021
Showing 1 - 5 of 5 results