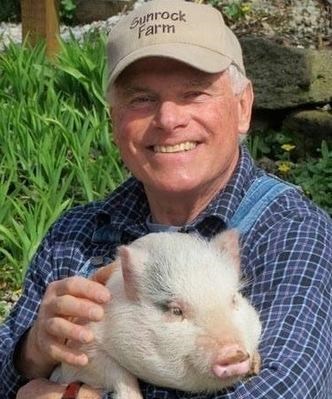 "Farmer" Frank Traina, 71, of Wilder, KY, passed away on September 16, 2014 at his farm in Wilder, KY. Frank was the Owner and Operator of Sunrock Farm. Frank earned a Masters Degree from Fordham University and a PHD from Cornell University. Frank was a retired Professor of Sociology from Northern Kentucky University and he also taught at the University of Florida. Frank served as a Franciscan Seminarian in Massachusetts for six years. Frank is survived by his loving wife, Debbie Pendock, his brother, John (Catherine) Traina, a sister, Margaret Traina, sister-in -laws, Susan Pendock, Sally (Rick) Painter, nieces, Sarah Crawford, Jenna Browning, Kelly Gladden, Denise Austin, great nieces Madeline and Isabel. Frank is also survived by a aunt, uncle and cousins. Debbie would like to thank all the friends and family for their love and support throughout Frank's battle with cancer. A special thanks to Frank's Farm Family. Visitation 10:00 am to 11:00 am, Saturday, September 20, 2014 at Southgate Community Center, 301 Walnut St. Southgate, KY 41071. Memorial service will be held 11:00 am Saturday, September 20, 2014, at the Southgate Community Center, in Southgate, Ky. In lieu of flowers, tax deductable donations are suggested to the "Farmer" Frank Traina Memorial C/ O The friends of Sunrock Farm 103 Gibson Ln. Wilder, KY 41076. Donations may be made via credit card by calling 859-781-5502. All funds will be used to enable underprivileged children to visit Sunrock Farm. Dobbling, Muehlenkamp- Erschell serving the family. Online condolences can be given at www.dmefuneral.com

Published by The Cincinnati Enquirer on Sep. 18, 2014.
To plant trees in memory, please visit our Sympathy Store.
MEMORIAL EVENTS
To offer your sympathy during this difficult time, you can now have memorial trees planted in a National Forest in memory of your loved one.
MAKE A DONATION
MEMORIES & CONDOLENCES
18 Entries
mark anthony allison
October 1, 2014
My thoughts and prayers are with you at such a difficult time.
Jane Totis
September 22, 2014
Frank lives on in the memories of countless people.His vision of Sunrock Farm was only possible because of you Debbie working side by side everyday together. I am so grateful that I was a small part of your lives for 4 years.It is a privilege to have worked with Frank.
September 21, 2014
Debbie ,
so sorry for your loss. Farmer Frank has been coming to my preschool for many years. I remember he would tell the children the baby chick's name was Debbie after his wife the cute chick he would say. I always know he loved his wife. Prayers for you and your family.
Karen Rieman St. Paul Nursery School
September 20, 2014
Debbie I am so sadden to hear of Frank's passing. May your love and memories give you strength in the difficult days and weeks ahead.
You and Frank created wonderful memories for so many.
Love, hugs and strengthening prayers.
Diana Riel
September 19, 2014
Debbie...Prayers are with you during this difficult time. God will reward both of you for the love you have shown to every child who has learned so much from Farmer Frank at Sunrock farm. Thanks for all you have contributed to our youth!
Gregg Frank
September 19, 2014
So sorry for your loss, Debbie. I worked briefly for SunRock in the nineties and also had the mobile petting zoo visit us at the library. He was a good man and had such a heart for children and animals. God bless you and your family.
Judy Adams
September 19, 2014
Dear Debbie, so sorry for your loss. You and Frank created a special place in Sunrock Farm, both of you and your crew have done an amazing job. You are in my thoughts and prayers. With love, Nan Donovan, American Airlines...
September 19, 2014
What a full life he lived and what a incredible service he provided the community with Sunrock Farm. I enjoyed my short time working there and later got to bring my kids there. The world needs more Franks.
Dan Knudsen
September 19, 2014
Our family is so very sorry to hear this sad news. Our children and ourselves love Sunrock Farm and Farmer Frank and Debbie. Farmer Frank and all of the Sunrock family brought so much joy into children's lives and I know his light will shine on. Much love and sympathy to Debbie and all at Sunrock during this difficult time.
September 19, 2014
Dear Debbie, I was so sorry to hear about the passing of your husband . After retiring from American Airlines I taught Pre- k classes at Compass School ." Farmer" Frank came out to visit us and I had the pleasure of meeting him . I remember how kind he was to the children and how he enjoyed knowing you and I had worked together at the airlines. You will be in my prayers. God Bless you and your family.
Connie Schmidt
September 18, 2014
Awwww....Debbie I am so sorry to hear this. I have such fond memories of YOU and your wonderful business that I know you and Frank were always so proud of. Godspeed to him and you my friend are in my thoughts and prayers.
Laurie OBrien
September 18, 2014
Heaven got an Amazing Angel. Frank was an all around guy. He helped our family a lot growing up, Sun Rock Farm was my first job, doing farm chores and summer camps. He did so much to make sure inter city children could come to the farm and learn about the earth. Frank RIP I love you
Chrissy Woodyard
September 18, 2014
My kids loved seeing Farmer Frank at Wild Wednesdays! You were a good man!
September 18, 2014
Thank you, my cousin Frank, for the love you brought into this world and the impact you made on the lives of my grandchildren Susannah and Benjamin. Memories of the days with you at Sunrock Farm will remain within them forever.
Deanna Adams
September 18, 2014
I am so saddened to hear that Farmer Frank is no longer with us. My family has such fond memories of Farmer Frank and his petting zoo at our annual back to school picnic. My thought and prayers to his family and all those he touched during this very sad time. Thinking of his family, Carrie Ellis
Carrie Ellis
September 18, 2014
Cousin Frank, We spent many wonderful years together I our younger years. The trips to the Seminary bike rides around Staten Island, ride on the Sea Beach Express to Coney Island, weekends at you home in Brooklyn with your Grand Dad Uncle John. You and your brother John helped mold my life. There will now be a void that can never be replaced. Thank you Frank.
Rest in peace.
Charles Traina
September 18, 2014
I'll miss your smile and your reminders of what to teach and how to do it. You created a beautiful place of meaning and joy. Thanks for letting me be part of it.
Lauren Woodiwiss
September 18, 2014
Showing 1 - 18 of 18 results