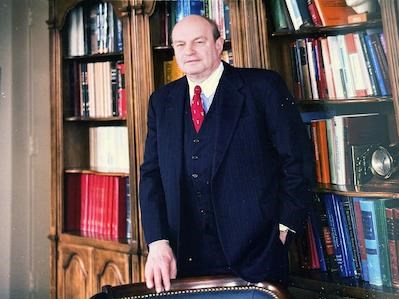 The world recently lost one of the great surgical minds of the twentieth century. Josef E Fischer was a world-renowned surgeon, scholar, leader and teacher, who devoted his life to scientific discovery and to the service of his patients. He died at home on June 14, surrounded by his wife and children. Dr. Fischer mentored generations of general surgeons, published prolifically, and reached the pinnacle of academic medicine, only recently stepping down as the William V. McDermott Distinguished Professor of Surgery at Harvard Medical School.

Growing up in Brooklyn, Dr. Fischer graduated from Harvard Medical School in 1961. He completed his internship and surgical residency at Massachusetts General Hospital in Boston, MA and then spent 1963 -1965 under Nobel Laureate Julius Axelrod at the National Institutes of Health. In 1968 he began working as a Teaching Fellow in Surgery and Fellow of the American Cancer Society at Harvard Medical School. Fischer joined the faculty of Harvard Medical School in 1970 and served as head of the Surgical Physiological Laboratory and Chief of the Hyperalimentation Unit at Massachusetts General Hospital during which time he advanced the standard for total parenteral nutrition (intravenous feeding).

In 1978 Fischer became the Christian R. Holmes Professor and Chairman of the Department of Surgery at the University of Cincinnati where he served until 2001. He then returned to Boston to accept the position of Chairman of the Department of Surgery and Surgeon-in-Chief at Beth Israel Deaconess Medical Center in Boston, MA. Fischer was credited with building both Departments into world-class surgical institutions, including recruiting 29 surgeons in his first 3 years at Beth Israel Deaconess, which was key to mending the institution's finances, after a 1996 merger resulted in a loss of more than $280 Million for the hospital.

Fischer was a great believer of the role of physician in the local community. He was active in supporting the arts as well as education in both Boston and Cincinnati. He had a great love of country and its potential for all, and had a deep appreciation for history. But most of all, Fischer was passionate about the care of patients, particularly the sickest, and was tireless in working to both cure and ease pain.

Fischer was a loving husband, father, grandfather and brother. He is survived by his wife Karen of 55 years, son Erich and daughter Alexandra, daughter-in-law Hallie and son-in-law Peter, and two grandsons, Asher and Aleksei.

The University of Cincinnati Foundation, PO Box 19970, Cincinnati, OH 45219-0970 or Online: https://foundation.uc.edu/donate (select other and note the name of the fund)


Published by The Cincinnati Enquirer from Jun. 25 to Jun. 26, 2021.
To plant trees in memory, please visit our Sympathy Store.
MEMORIAL EVENTS
To offer your sympathy during this difficult time, you can now have memorial trees planted in a National Forest in memory of your loved one.
MAKE A DONATION
MEMORIES & CONDOLENCES
2 Entries
Joe's relentless pursuit of excellence reached all of us privileged to join his team. I will remember him for his drive and passion for taking on the most difficult of challenges that were laid before him.
Frank Opelka
Work
June 26, 2021
Joe will be missed. Always enjoyed working together on ACS projects.
Skip Collicott
Work
June 25, 2021
Showing 1 - 2 of 2 results