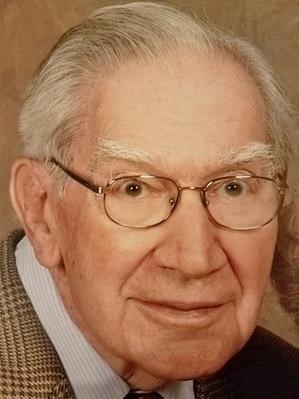 Travis Q. Holden, 96, of Urbana Ohio, passed away peacefully on January 28, 2018 at Hearth & Home Urbana. He is survived by his loving wife Mildred. Born on May 22, 1921 in Kings Mills Ohio, he was the son of the late Charles L. Holden and Ona Holden (nee Starkey). He was preceded in death by sister Marcella Holden and brother Charles L. Holden Jr.

Travis was a 1939 graduate of Kings Mills High School and a 1947 graduate of the University of Cincinnati College of Engineering. He had been married 75 years to his high school sweetheart, Mildred P. Holden (nee Innis) of Maineville Ohio. He was the devoted father of the late Judy L. Holden, John T. Holden of Cincinnati Ohio, Kathy J. (Michael) Dahler of Southampton MA., and Gregory T. Holden (Audra) of Asheville N.C. In addition, he is survived by five grandchildren, Ryan (Dena) Holden, Jennifer Holden, Lindsey Dahler, Raminta Holden, Gaiva Holden, and one great-grandchild, Luka Holden.

During his junior year of college, he joined the U.S. Army. In basic training, he was interviewed by a team of army scientists. The next day he was riding in a train car headed to a secret location, which turned out to be Oak Ridge Tennessee, "The Atomic City". His chemical engineering education made him a valuable contributor to the Manhattan Project that would ultimately lead to the successful conclusion of World War II. He returned to college after the war, graduating in 1947.

He immediately began his long career in the paper manufacturing industry, joining Howard Paper Company in Franklin Ohio. Four years later, he was transferred to their Urbana facility, beginning a 67-year residence in his adopted hometown. He and Mildred then began a lifetime membership in Urbana's United Methodist Church. During his time at Howard Paper he held the positions of Chief Chemist, Plant Supervisor, and Plant Manager.

As a lifetime sports fan, Travis was an Urbana High School booster, loyal Cincinnati Reds fan, University of Cincinnati basketball enthusiast, and attended Ohio State football games until he was 88. After his retirement, he and Mildred joined the Urbana Country Club and became avid golfers. In addition, he continued his long-time interest in the stock market, completed a family genealogy project, and acquired an appreciation of fine art, leading to an enviable collection of Dominick Labino glass pieces. He also enjoyed giving his grandchildren rides in his classic 55 Chevy and 65 Mustang.

At a date to be determined, a service will take place at Urbana United Methodist Church, 238 N. Main St. Urbana Ohio, followed by a reception in the church parlor. A private family ceremony will occur at Rose Hill Cemetery in Mason Ohio at a later date. In addition, the family would like to give a special thanks to the wonderful and caring staff of Hearth & Home Urbana. The family prefers that memorial donations be made to benefit Melvin Miller Park with a check made out to: City of Urbana (park/recreation fund c/o Travis Holden in the memo field) and mailed to 205 S. Main St. Urbana, Ohio 43078. Online condolences can be made at www.walterfunerals.com


To plant trees in memory, please visit our Sympathy Store.
Published by The Cincinnati Enquirer on Jan. 31, 2018.
MEMORIAL EVENTS
No memorial events are currently scheduled.
To offer your sympathy during this difficult time, you can now have memorial trees planted in a National Forest in memory of your loved one.
Funeral services provided by:
Walter & Lewis Funeral Home
MAKE A DONATION
MEMORIES & CONDOLENCES
8 Entries
Dear Kathy, So sorry for the loss of your dad. I think of you and your family with fond memories. We had a pretty good life in our neighborhood with wonderful, loving parents.
Thinking of you and all of your family.
Brenda(Howe)Rogers
February 5, 2018
Many nice memories of Mr. & Mrs. Holden and their dedication to the Urbana United Methodist Church.
Karen Engle
February 3, 2018
Greg and Family,
So sorry for the loss of your father. We are thinking about your family at this time.

Carl, Jo and Alan Anderson, Tracy Clarke and Rae Jane Hickey
February 1, 2018
So very sorry to hear this! I have many good memories of him and Mildred. Thoughts and prayers are with the family.
Rebecca Kenton Pyle
February 1, 2018
So Sorry for your loss. Mr Holden was a wonderful man and neighbor. I will rejoice in the wonderful life story he left for his children and Grandchildren. Many wonderful memories of life on Madison and Boyce. Pennie Cahoon Brown.
Pennie Cahoon Brown
Neighbor
January 31, 2018
So sorry for your loss. May you find comfort and strength in God's promise found at John 6:40
Jennifer R
January 31, 2018
Mrs. Holden,
My thoughts and prayers are with you and your family at this difficult time. I have many fond memories grow up as your neighbor.
Sincerely,
John Shockey
John Shockey
January 31, 2018
Prayers for all of
You guys ! I'm an employee here at hearth and home
Of Urbana and I was more than happy
To take care of Your father ! He was a great man! May he Rest In Peace
Destiny Honeyman
January 30, 2018
Showing 1 - 8 of 8 results