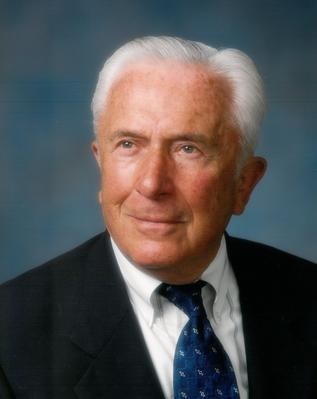 Charlotte - Robert (Bob) Harry Spiro, PhD, died in Charlotte on October 1, 2013. Bob Spiro was born on Dec 5, 1920 in Asheville to Dr. Robert Spiro and Eoline Shaw Spiro. He grew up in west Asheville attending Aycock Grammar School and Hall Fletcher Junior High. He was a veteran of naval combat during WW II. He served aboard the destroyer USS Morris and took part in eight major combat campaigns. His ship was struck by a Japanese Kamikaze plane with heavy loss of life during the invasion of Okinawa that lead to the end of the war.

Dr. Spiro earned a BS at Wheaton College and a Doctorate of history at Univ of Edinburgh in Scotland. He was a professor at King College in Bristol, TN and Mississippi College in Jackson, MS. He then became President of Blue Ridge Assembly in Black Mountain, NC. Dr. Spiro then became dean at Mercer Univ and then president of Jacksonville University in Jax FL where he served until 1980, when he was appointed by President Jimmy Carter as Under Secretary of the Army.

In addition to his tenure as Army Secretary, Dr. Spiro rose to the rank of Rear Admiral in the Naval Reserve retiring from the Navy after 38 years of service. He also served as National Executive Director of the US Reserve Officer Association in Washington, DC. Dr. Spiro was involved during the course of his life in many business, academic, governmental and charitable endeavors. Among others he was President of the National Security Caucus Foundation, President of the Florida Association of Colleges and Universities, and President of the University of Edinburgh's USA Development Trust. He was Chairman and Chairman Emeritus of the American Security Council Foundation and was instrumental in the Korea Baptist Theological University and Seminary.

Bob Spiro is survived by his wife, Juanita T. Henderson of Charlotte, NC; his children, Dr. Robert T. Spiro of Silverdale, WA, Elizabeth S. Spiro of Jax FL, and James M. Spiro of Sylva, NC; his eight grandchildren and six great grandchildren; and his sister, Sarah Scott of Bristol, TN. He was preceded in death by his sister, Margaret Norwood.

Published by Asheville Citizen-Times on Oct. 15, 2013.
To plant trees in memory, please visit the Sympathy Store.
MEMORIAL EVENTS
To offer your sympathy during this difficult time, you can now have memorial trees planted in a National Forest in memory of your loved one.
Funeral services provided by:
Hankins & Whittington
MAKE A DONATION
MEMORIES & CONDOLENCES
0 Entries
Be the first to post a memory or condolences.