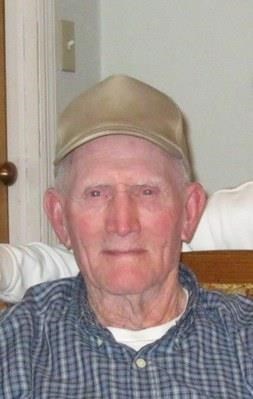 WEAVERVILLE - Bill joined his beloved and dear wife Mary Ruth as an angel on December 8, 2017 at age 92. Bill was born at home to William Mont Black and Mamie Watts Black on November 8, 1925 and as he liked to joke, he "started life with a spanking." One of his many endearing traits was his positive and engaging manner; a personality prone to insightful one liners and lots of jokes. He had an encyclopedic and extensive memory of the history of the North Buncombe area and into Madison County. People sought him out to learn long forgotten facts about their own family history or history of the area.

Bill graduated from Flat Creek High School in 1943 with 9 other boys and 11 girls. In 1947 he began work at Merchant's Construction Company after taking Will to work one day and so began his life as a carpenter.

In February 1954, he and his brother Boyd began 2 years of service in the United States Army. He proudly served his country as a Military Policeman with a top secret clearance in special weapons and was involved in testing the atomic bomb. Due to his exemplary military bearing and the meticulous performance of his duties, he was selected to be the driver and escort of the Base Commander during his last year in service and was awarded "Soldier of the Month."

Anyone who knew Bill knew of his ingenuity and focus on the organization of his tools. His workshop is a marvel. While in service, he organized his locker in such an efficient way that his locker became the required model and standard for all in his company.

After returning from the military in February 1956; he married the love of his life Mary Ruth Green Black on June 8, 1957. Ruth preceded him in death in May of this year just short of their 60th anniversary and he was lost without her. He often said that without her "their home was just a house."

Bill was a first class carpenter and job superintendent in the construction business. He was employed by Merchants Construction Company, Price Ray Construction and D. Michael Ward Inc. until his retirement at age 62. He was also involved in the construction of the Jupiter Fire Department. Besides his work life at the various companies, he donated many hours of his construction skills and careful attention to detail to the work on the homes of family members.

Bill was a perfectionist in anything he tried to do; he succeeded and was admired. He lived the life he wanted. Bill was blessed with many friends; his "bums" as he called them and always enjoyed their company. Especially in these last years, he appreciated the extra care that made his and Mary Ruth's life at home easier. In addition to his wife, Bill was preceded in death by his parents William Mont and Mamie (Watts) Black; sisters Mabel Black Oldham and Madeleine Black Medford, and brothers, Wilfred and Bobby Black.

His funeral service will be held at 2:30 p.m. Friday, December 15, 2017 in the Chapel of West Funeral Home, 17 Merrimon Ave. Weaverville. The Reverend Stanley Peek will officiate with Janice Black delivering the eulogy. Pallbearers will be Weldon Reavis, Howell Smith, Orville Arwood, Trent Arwood, Jerry Clevenger and Mason Trivette. All his friends are honorary Pallbearers.

Burial will be in Oak Grove Cemetery, Marshall.

Flowers are welcome or contributions in Bill's honor may be made to: Jupiter Fire Department 331 Jupiter Road Weaverville, NC 28787.

His family would like to give a heartfelt thanks to friends and neighbors who did so much to help Bill.

For those who desire, condolences may be offered to the family under Mr. Black's obituary at www.WestFamilyFuneralServices.com.

In closing, Bill would want us all to remember to be kind to and love each other.

Published by Asheville Citizen-Times on Dec. 13, 2017.
To plant trees in memory, please visit the Sympathy Store.
MEMORIAL EVENTS
Dec
14
Visitation
5:00p.m. - 7:30p.m.
NC
Dec
15
Funeral service
2:30p.m.
West Funeral Home
17 Merrimon Avenue, Weaverville, NC
Funeral services provided by:
West Funeral Home
MAKE A DONATION
MEMORIES & CONDOLENCES
Sponsored by West Funeral Home.
1 Entry
One of my first memories is visiting Uncle Bill and Aunt Ruthy in their trailer on the land where their house now stands. I loved hearing Bill talk about his time in the Army in New Mexico and the old stories from his childhood. Bill was a talented man. He built the ornamentation on the beautiful mantel in their living room from pieces of his mother's bed.

We were hoping for many more years visiting.

My condolences to the family and friends. I know the Green sisters are very sad to loose Bill.