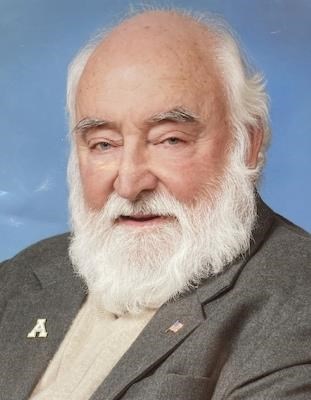 William "Bill" Stanley passed away on Tuesday, September 8, at the age of 91. He leaves behind his wife of 66 years Jane McLaurin, three children (Julia, Dan, and Mary Jane), six grandchildren, and 7 great grandchildren.

Bill was born on March 4, 1929, in Montgomery, Alabama. He was raised in Marion, North Carolina, and graduated from Marion High School before serving in the United States Marine Corps from 1946 to 1948. Later, he was stationed in North China and Guam while serving in the US Army's 82nd Airborne Division from 1950 to 1954. Following his military service, Bill attended Davidson College, Appalachian State Teachers College (Bachelor's Degree, 1957) and Appalachian State University (Master's Degree, Biology, 1959).

In 1988, in his first bid for public office as proud Democrat, Bill was elected to the Buncombe County Board of County Commissioners, a position he held for 24 years. During this time, he served as the Director of the Juvenile Education Center in Swannanoa and was sworn in as the President of the North Carolina Association of County Commissioners in 1999. Bill was also a member of VFW Post 891 and the Land of the Sky Shrine Club.

Bill retired from public service in 2012 as the longest-serving member in the history of Buncombe County's Board of Commissioners. He enjoyed spending time with his family, all things BBQ and bluegrass, golf, his work with the Shriners, and the company of his many friends and former colleagues.

A private service will be held for his family at the VA Cemetery in Black Mountain. In lieu of flowers, please send donations in his name to the Land of the Sky Shrine Club (39 Spring Cove Rd., Swannanoa, NC) or a charity of your choice

david lee black
Student
September 9, 2020
RIP Coach. You had more influence on my adolescent years than you ever knew.
Jerry Buckner
Student
September 9, 2020
My sincere condolences to the Stanley family . Mr Stanley was a fine principal and role model to so many . As a Commissioner , he was always so supportive of Veteran’s needs. He gave so much of his time serving others .
My thoughts and prayers go out to you for your great loss .
Jan Banks
Acquaintance
September 9, 2020
Thank you Mr. Stanley for all that you did for the staff at JEC/SVYDC! RIP!! The world lost a good man!
Jimmy Branch
Coworker
September 9, 2020
To all of the Stanley’s - I am so very sorry for the passing of Bill. I loved him so very much. He would always give me a giant “bear” hug. My condolences to one and all, especially to Jane and their children. Sending giant HUGS to all of you. ❤❤
Susie
Friend
September 9, 2020
My love and prayers to the Stanley family. He was my principal as well as my boss at the bbq restaurant. Great man.
Kim Linville
Neighbor
September 9, 2020
I am so sorry for all of you. Bill was a wonderful man. I loved working for him at the bbq. Love and prayers. Linda Ray
Linda Ray
Coworker
September 9, 2020
I am proud to have called Bill Stanley my uncle. I have loved him all my life and will continue to do that in the difficult days ahead. Lunda and I want our "Mountain Relatives" to know that we are with them with all our heart. To my sweet Aunt Jane, Dan, Julie, and Mary jane we ask that our Precious Lord be with them and guide them in the difficult days ahead.
Joe and Lunda Stanley
Family
September 9, 2020
Coach there has never been anyone like you. I am proud I got to play for you at Owen you were the greatest. I proud of the way you made us all great human beings. I love you Coach!
Neil Gilchrist
Teacher
September 9, 2020
Mary Jane and family my thoughts and prayers are with you during this difficult time. Mr. Stanley was the kindest, and most lovable man I have ever known and he will be missed greatly. I will be praying that God will hold all of you close and give you peace and comfort. I love you Mary Jane and anything I can do for you or your family don't hesitate to ask.
Renda Swilling
Friend
September 9, 2020
Showing 1 - 51 of 51 results